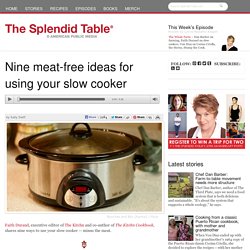 Sally Swift: What is your take on the slow cooker, previously known as the Crock-Pot? Faith Durand (Photo: The Kitchn) Faith Durand: I think it's like your sous chef or your prep cook. SS: I hadn't thought about it that way. FD: It does the hard work while you're busy doing other more glamorous and exciting things in the kitchen. Slow Cooker Baked Potatoes Recipe (try not wrapping them) Curried Vegetable and Chickpea Stew. Thinking about pulling out your slow-cooker, now that it's October? 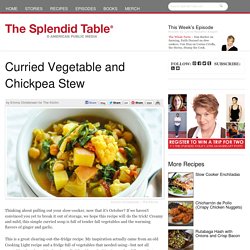 If we haven't convinced you yet to break it out of storage, we hope this recipe will do the trick! Creamy and mild, this simple curried soup is full of tender fall vegetables and the warming flavors of ginger and garlic. This is a great clearing-out-the-fridge recipe. My inspiration actually came from an old Cooking Light recipe and a fridge full of vegetables that needed using—but not all vegetables that the original recipe called for. I love the big pieces of cauliflower that came from that experiment, but I have also made versions with parsnips, turnips, winter or summer squash, extra carrots, and swiss chard.

Since this makes such a large batch, you can freeze what you don't think you'll eat in a week. This recipe is also easily replicated in a dutch oven, if you'd prefer that route. Tester's Notes This is always one of the first recipes I make once the weather gets colder. (Photo: Emma Christensen / The Kitchn) Slow Cooker Black Eyed Peas. We had a lot of good fortune this year. 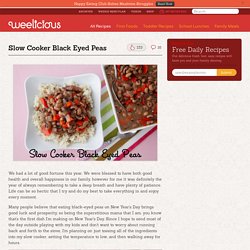 We were blessed to have both good health and overall happiness in our family, however for me it was definitely the year of always remembering to take a deep breath and have plenty of patience. Life can be so hectic that I try and do my best to take everything in and enjoy every moment. Many people believe that eating black-eyed peas on New Year's Day brings good luck and prosperity, so being the superstitious mama that I am, you know that's the first dish I'm making on New Year's Day. Since I hope to send most of the day outside playing with my kids and don't want to worry about running back and forth to the stove, I'm planning on just tossing all of the ingredients into my slow cooker, setting the temperature to low, and then walking away for hours. While Chloe could totally live on beans if given the chance, Kenya's not exactly the biggest bean lover. Slow Cooker Balsamic Chicken.

When I received an S.O.S. comment on Facebook from one of my favorite readers, Maribel, I put on my thinking cap and went straight into action. 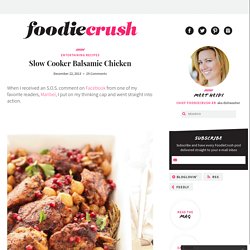 With Christmas Eve approaching in just a wink of an eye, Maribel commented that she was in need of a recipe that had enough style to impress at the holiday dinner table. But there was one condition. The main dish had to be cooked in a slow cooker. See Maribel doesn’t have an oven. No, I don’t know why—I’m fantasizing it’s because she’s either in the midst of an amazing kitchen remodel or lives in a teepee fashioned with an es long extension chord to a chugging generator or possibly just doesn’t believe in the clutter an oven adds to her kitchen? Slow Cooker Indian-Spiced Chickpeas and Potatoes Recipe. Slow-Cooker Curried Chicken with Ginger and Yogurt. Overnight Braised Beans. Given 15 minutes for prep, a slow cooker, some dried beans, garlic, onions and whatever seasoning moves you, you can launch a bean stew or this Quick and Spicy Bean Soup. 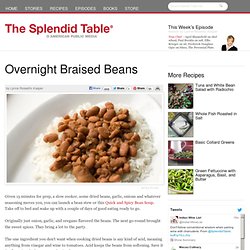 Take off to bed and wake up with a couple of days of good eating ready to go. Originally just onion, garlic, and oregano flavored the beans. The next go-round brought the sweet spices. They bring a lot to the party. The one ingredient you don't want when cooking dried beans is any kind of acid, meaning anything from vinegar and wine to tomatoes. Cook to cook: This proves the theory that dried beans do not need soaking. Ingredients 2 to 3 cups dried pinto beans (organic if possible), not soaked 1 large onion, cut into 1-inch dice 6 garlic cloves, chopped 1 teaspoon dry oregano 1 3-inch cinnamon stick, cracked 5 whole cloves 12 whole allspice 1 teaspoon salt 1/2 teaspoon freshly ground black pepper Instructions 1. 2. Slow-Cooker Chicken Tikka Masala. Slow Cooker Indian recipes : Oh Taste n See.....

Dum Aloo is a creamy curry, usually made with baby potatoes, were the potatoes are slow cooked in a spicy sauce in a sealed vessel. 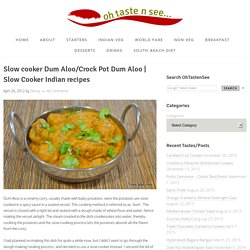 This cooking method is referred to as ‘dum’. The vessel is closed with a tight lid and sealed with a dough made of wheat flour and water, hence making the vessel airtight. The steam created in the dish condensates into water, thereby cooking the potatoes and the slow cooking process lets the potatoes absorb all the flavor from the curry. Slow-Cooker Asian Short Ribs. How To Cook Beans in the Slow Cooker Cooking Lessons from The Kitchn. One of the best ways to guarantee perfectly cooked beans — ones that emerge creamy and tender instead of crunchy or mushy — is cooking them ever so gently over low, steady heat. 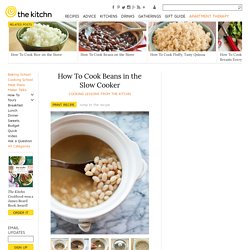 Hmm ... low and steady heat, you say? Sounds to me like a job for the slow cooker.