Dr Pepper pulled brisket. The first time I recall having brisket, it wasn’t the smoked hunk of beef that many people associate with Texas. 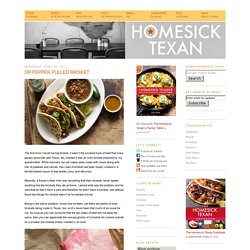 No, instead it was an oven brisket prepared by my grandmother. While normally our pot roasts were made with chuck along with lots of potatoes and carrots, this roast of brisket had been slowly cooked in a tomato-based sauce. Readers’ recipe swap: Braised. As I slow-cooked my way through this week’s recipes, each was declared the champion – until I tasted the next dish. 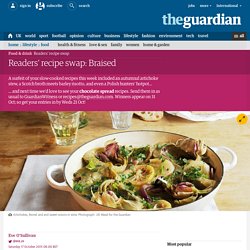 So it continued, until I reached a state of well-fed confusion ... To feed a crowd, look no further than detoutcoeurLimousin’s flavourful Polish hunter’s stew; hearty doesn’t even begin to describe it, especially when served with buttery mash. The same can be said for Graeme Taylor’s take on Scotch broth, where the pearl barley is served risotto-style with lamb shank braised in ale – cooking in a fug of ale is as fun as it sounds. 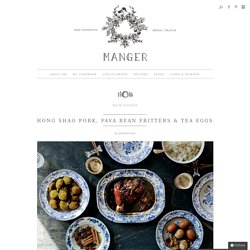 Growing up in Hong Kong, my family had a lot of Shanghainese friends with whom we would often feast on amazing meals from their region. I have such a soft spot for Shanghainese style cuisine. The food is all about slow cooking, seasonal and fresh ingredients braised in rice wine, vinegar, soy sauces and a large variety of spices. We would go to restaurants called ‘associations’ where you can eat the most authentic regional cuisine. They were originally intended for homesick locals to rejoice on their provincial food after settling in Hong Kong. Food - Recipes : Red-braised pork ribs with sweet shallots and peanuts. How to cook the perfect osso buco. Osso buco, as Elizabeth David tartly observes, means "bones with holes, or hollow bones" – which is probably why it is never translated on menus. 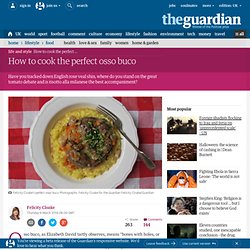 Slow-braised veal would sound both more appetising and accurate, yet those bones (not in fact hollow at all, but full of rich, delicious marrow) are the dish's crowning glory – anyone who sends the plate back to the kitchen without investigating their interior has missed out on the best bit. The best-known version hails from Milan, where it is generally served with a vivid yellow saffron risotto, also made with bone marrow. Most of the recipes I try claim to be for ossibuchi alla milanese, yet they vary wildly – Anna Del Conte prefaces her take with the somewhat prickly claim that "as a loyal Milanese who strives to defend our highly sophisticated cuisine from the intrusion of foreign flavour, I can do no better than quote from the great 19th-century writer, Artusi: 'This is a dish that should be left to the Milanese.'" 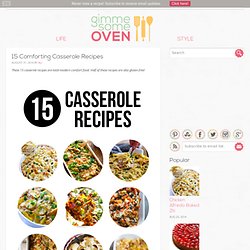 Half of these recipes are also gluten-free! Alright, let’s be honest. There are a few retro food trends that are probably better left firmly in the past. (Ahem.) But lest you think that the days of the beloved casserole are over, think again. The idea behind these modern casseroles is still the same — basically, throw all sorts of ingredients in a pan and bake it. So today I thought it would be fun to do a roundup of 15 recent casserole recipes from Gimme Some Oven and a few other food bloggers I love. Chicken Enchilada Casserole | Gimme Some Oven (*Gluten-Free) Pork Chop Casserole | Bev Cooks Creamy Chicken Quinoa and Broccoli Casserole | Pinch Of Yum Easy Cheesy Breakfast Casserole | Gimme Some Oven (*Gluten-Free) Teriyaki Chicken Casserole | Oh Sweet Basil (*Gluten-Free if using GF fried rice and soy sauce) Chicken Parmesan Meatball Casserole | Buns In My Oven.

Food - Recipes : Pork and fennel casserole. Pork and Poblano Stew Recipe. 1 Char, peel, and chop the poblano chiles: Char the chile peppers on all sides, directly over a gas flame, or broil, turning every minute or so until the chiles are blackened on all sides. 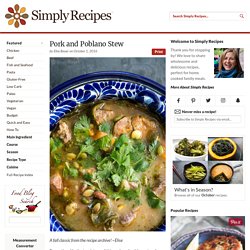 Place in a bowl and cover with a clean dish towel. Let sit for 10 minutes or so, then rub off the blackened charred skin. Cut away and discard the stem, seeds, and internal veins. Roughly chop the chiles into 1 to 2 inch pieces. Set aside. 2 Sear the cubed pork: Heat the vegetable oil in a large Dutch oven on medium high heat. 3 Sauté the onions and garlic: Remove the pork from the pan and set aside. Scrape up any browned bits from the bottom of the pan while the onions cook.

Paleo Mulligatawany Stew. May 10, 2014 Posted by Melissa Joulwan on May 10, 2014 in Blog, Curries/Stews, Recipes, Soups | 6 comments WF2 Recipe: Mulligatawny Stew There is a ridiculously long list of new recipes on my whiteboard that I want to share with you, but that requires re-making them, picking out cute photo props, taking a photo, then writing up the blog post — all of which seems impossibly daunting right now. 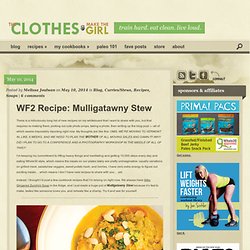 My thoughts are like this: OMG, WE’RE MOVING TO VERMONT IN, LIKE, 6 WEEKS, AND WE NEED TO PLAN THE MOTHER OF ALL MOVING SALES AND DAMN IT! WHY DID I PLAN TO GO TO A CONFERENCE AND A PHOTOGRAPHY WORKSHOP IN THE MIDDLE OF ALL OF THIS?! Sheila's Retro Beef Curry (circa 1974), from What Katie Ate. Food - Recipes : Red-cooked pork belly. Braised pork with plums. Braised pork with apricots, ginger and lemon thyme recipe. Food - Recipes : Slow-cooked squid and chorizo stew. Food - Recipes : Fruity beef casserole with parsley dumplings. Readers' recipe swap: slow-cooked. Patience really was a virtue this week – but when the weather gets rough, who wouldn't want to curl up by the oven for a few hours? 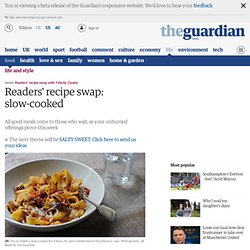 With gorgeously savoury ribs, a rib-sticking Italian soup, and a creamy Keralan fish curry on the menu, it was particularly tough to pick a favourite, but for sheer alchemy, James Connery's magically melting ox cheek ragu took some beating. Quite possibly the perfect dish for a wet winter weekend.

The winning recipe: braised ox cheek ragu I live in Santiago de Compostela in north-west Spain and the weather has been awful this winter, so I wanted to make something heart-warming, rich and luscious. There is a beautiful outdoor market here that sells local produce. 1 Saute the onion, carrot and fennel in a large, heavy-based casserole dish in a small amount of olive oil until slightly softened and browned at the edges. 2 Dust the ox cheeks liberally with flour. 6 Cut a small disc of parchment paper and place on top of the sauce, then cover with a lid.