Five Reasons I Love Using QR Codes in My Classroom 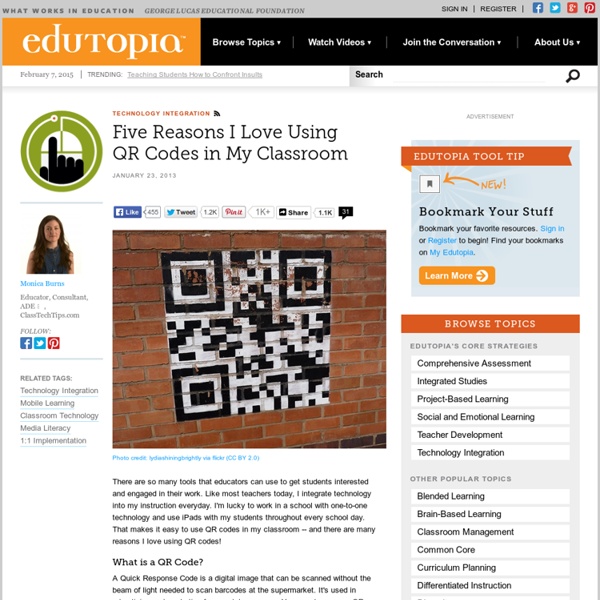 There are so many tools that educators can use to get students interested and engaged in their work. Like most teachers today, I integrate technology into my instruction everyday. I'm lucky to work in a school with one-to-one technology and use iPads with my students throughout every school day. That makes it easy to use QR codes in my classroom -- and there are many reasons I love using QR codes! What is a QR Code? A Quick Response Code is a digital image that can be scanned without the beam of light needed to scan barcodes at the supermarket. What does this marketing tool have to do with education? How QR Codes Can Make a Difference in the Classroom 1. Instead of asking students to type in a long web address where they could easily make mistakes, a QR code will take them straight to a website. 2. We all want to avoid using search engines that might bring our students to the wrong website. 3. 4. Websites like Qurify.com allow you to generate your own QR code for free. 5.

Science & Environment - How big is space? Big questions demand big answers. And here at Future we have a hard time thinking of a question bigger than: how big is space? So, we set about trying to illustrate it. The resulting picture is so large that we could not squeeze it all on to one image in Photoshop. Instead, we had to create several sections and stitch them together for you. Printed out, the graphic spans 27 pages of A4 paper. The Best Web 2.0 Applications For Education In 2012 It’s that time of year again when I start posting year-end “The Best….” lists. There are over one thousand lists now. You can see them all here. As usual, in order to make this list, a site had to be: * accessible to English Language Learners and non-tech savvy users. * free-of-charge.

Just ASK Publications and Professional Development - Just for the ASKing! January 2013 Volume X Issue I Just for the ASKing! is a monthly e-newsletter that addresses the needs of all those who strive to be instructional leaders. This month's issue is the second in a periodic series on the use of technology as a teaching and learning tool. It features recommendations from educators who are seeing the impact of technology on student achievement. Displaying QR Codes on an LED Screen More and more companies are using LED screens in order to showcase their interactive advertising campaigns. QR codes are often used on these LED display ads, however, its important to consider the limitations of QR code scanability on LED displays. One common error that affects QR code scanability are position detection patterns. The position detection patterns are located in three of the four corners of a QR code, allowing omni-directional, high-speed scanning. However, if the refresh rate of the LED screen is low, the barcode scanner, especially on a smartphone, could capture the picture at an incomplete state, causing the code to be unreadable.

Top Five iPad Apps for Teaching Across All Content Areas Ever since I was a kid, I loathed back to school commercials. They always showed parents gleefully skipping through aisles of pencils and notebooks as the kids, sullen and dejected, sluggishly followed along. It's a scene we are all too familiar with, and one that creates a negative stigma around school. But what if that scene were flipped? What if the kids were happy and eager to get to school? Is that possible after roughly 90 days of sun and fun?

Educational Technology and Mobile Learning: The 22 Digital Skills Every 21st Century Teacher Must Have One of the most popular articles I have written in this blog was about the 33 Digital Skills Every 21st Teacher should Have. This post has been used in several digital literacy courses in some universities in the States and also here in Canada, I also got it published in a couple of printed journals . Now that one year has elapsed since its first seeing the light I decided to revisit it again but this time adding more updates and organizing its content in a better and easy navigable way. The skills I have mentioned here are essential to every teacher ( and student ) using technology in class, at home , or for professional development purposes.

QR Codes on the Big Screen 2 Oct I’ve been using QR codes in my classroom for scavenger hunts and as a tool for research. If you haven’t viewed my presentation on making your own QR codes and using them in the classroom, check it out here. 7 Online Quiz Tools Perfect For Classrooms Whether you want to have students turn in homework via an online form or simply take a quiz or test, online quiz tools are critical to having a connected classroom. Most tools are free, all are robust, and they’re quite easy to use. What could be better than that? You can use any of these below tools to get feedback from parents, students, colleagues, and more. Below is simply an introduction to each tool in case you aren’t familiar with it so be sure to dive into any that interest you and give them a try in the classroom!

It's an Interactive Whiteboard! It's a Doc Cam! It's... Apple TV! Over the holidays I asked Santa for an AppleTV and boy did that jolly old elf deliver. I had some networking issues to work out (see the end of this post for the issues and solution), but once that was taken care of, the magic began. This $99 device has become the all-in-one accessory for my iPad classroom. Printing QR Codes Printing QR Codes People ask us every day about printing for QR Codes and what size is advisable. We are going to explain it in very simple terms because mistakes are made sometimes and we hope this article will help you overcome this. To print a QR code you must have the QR Code in the correct format.

6 free ways to capture student responses without costly clickers The Answer Pad is a free, enhanced student response system, together with a grading tool for assessments for BYOD. Go Interactive, has 6 different response types, an awesome draw feature. It engages reluctant students, encouraging them to show what they know, enabling teachers to immediately gauge understanding in the classroom. The Answer Pad can then score paper quizzes, with multiple question types, cutting grading time significantly. Poll Everywhere provides students with a simple method to share their ideas right from a phone, laptop, or tablet.

Five Free Web 2.0 Tools to Support Lesson Planning "Teachers need to integrate technology seamlessly into the curriculum instead of viewing it as an add-on, an afterthought or an event." -- Heidi Hayes Jacobs, Educational Consultant, Curriculum Designers, Inc. Web 2.0 tools are online software programs that allow users to do a number of different things. They can be used to teach curriculum content, store data, create or edit video, edit photos, collaborate and so much more. QR Code Best Practices in Print QR barcode scans grew 1200% from July to December 2010. comScore released its findings that, in June 2011, 14 million Americans scanned QR codes on their mobile phones. These numbers show the importance of QR codes and a need to get it right now rather than later. Although the list of QR code guidelines seems listed below seems long, it’s not really that hard of a task to do it right. The first step is knowledge and understanding of what to do and what not to do. Materials

Five Free iPad Apps for Creating Video Lessons (AKA Flipped Classroom Lessons) One of the things that I’m often asked about is creating explanatory videos on the iPad. Whether you want to create these videos for students to watch as part of a “flipped curriculum” or you want students to create the explanatory videos to demonstrate what they know, these apps are good choices for reaching those ends. The Knowmia Teach iPad app is an excellent app for creating your own whiteboard videos. Some of the highlights of Knowmia Teach app include the option to use your iPad’s camera to record yourself while drawing on the whiteboard.