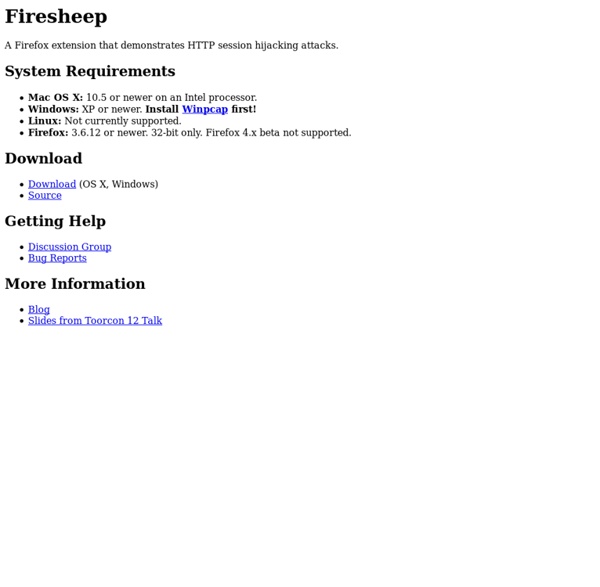 Cheat Engine Cheat Engine Features[edit] Cheat Engine can inject code into other processes and as such most anti-virus programs mistake it for a virus. There are versions that avoid this false identification at the cost of many features (those which rely upon code injection). The most common reason for these false identifications is that Cheat Engine makes use of some techniques also used in trojan rootkits to gain access to parts of the system, and therefore gets flagged as suspicious, especially if heuristic scanning is enabled in the anti-virus program's settings. Implementations[edit] Cheat Tables[edit] Cheat Engine allows its users to share their addresses and code locations with other users of the community by making use of cheat tables. In addition to simple memory addresses, cheat tables can extend the functionality of Cheat Engine using the Lua scripting language. References[edit] External links[edit]

Serial Key Code Ophcrack Essential Wireless Hacking Tools By Daniel V. Hoffman, CISSP, CWNA, CEH Anyone interested in gaining a deeper knowledge of wireless security and exploiting vulnerabilities will need a good set of base tools with which to work. Fortunately, there are an abundance of free tools available on the Internet. This list is not meant to be comprehensive in nature but rather to provide some general guidance on recommended tools to build your toolkit. Finding Wireless Networks Locating a wireless network is the first step in trying to exploit it. Network Stumbler a.k.a NetStumbler – This Windows based tool easily finds wireless signals being broadcast within range – A must have. (NetStumbler Screenshot) Kismet – One of the key functional elements missing from NetStumbler is the ability to display Wireless Networks that are not broadcasting their SSID. (Kismet Screenshot) Attaching to the Found Wireless Network Once you’ve found a wireless network, the next step is to try to connect to it. (Screenshot of Airsnort in Action)

Jpg+FileBinder Free Download Protecting private information against unauthorized access is one of the problems that computer users encounter. In order to solve this issue, you can use various encryption methods, but there are also applications such as Jpg+FileBinder that can help you. This lightweight tool is simple, yet useful, as it allows you to hide important information in a picture carrier file. Practically, it merges an archive file with a picture, making the output look like an image, when actually it contains the compressed file. The main advantage it brings you is the ease of use, as you have to follow just a few steps to hide your files. The first one is to choose the image file. Then, you have to select the archive file that you want to hide, whether it is ZIP, RAR or 7Z. After you choose all the files, all you have to do is press the 'OK' button and let the program do its magic. Jpg+FileBinder is a simple application designed to enhance file security.

Cryptocat Surf Anonymous Free - Your Ultimate Free Online Protection Panopticlick Hidden iframe injection attacks | Structured Randomness [Updated on October 27, 2009 with new a version of the script] It is a shame that after all those posts about security, some of my websites were under attack today. Shoban and Anand emailed me about this today morning (Thanks guys) and I tried to understand what was going on. To my utter disbelief more than 10 websites hosted in the same server were affected by the attack. All the index.* files in the server were infected with a piece of code that loaded a hidden iframe in the page. To the html pages the following piece of code was added: To php pages it added: echo “<iframe src=\” Asha took the effort and cleaned most of the infected files. How did the worm inject the hidden iframes to my files? There are two ways through which the worm is believed to infect your files: 1) Server is compromised This is the most common way. 2) Client side FTP The worm resides in some/any of the client side PCs you use for accessing the ftp/control panel accounts of your hosting server.

ActiveTcl is Tcl for Windows, Mac, Linux, AIX, HP-UX & Solaris ActiveTcl Business and Enterprise Editions include our precompiled, supported, quality-assured Tcl distribution used by millions of developers around the world for easy Tcl installation and quality-assured code. When you're using Tcl on production servers or mission-critical applications, ActiveTcl Business Edition and Enterprise Editions offer significant time savings over open source Tcl for installing, removing, upgrading, and managing common Tcl modules. Not sure which edition is right for you? Check out our Compare Editions chart. Tested, Timely and Compatible Save time in your development cycles by starting with a precompiled Tcl distribution for out-of-the-box installation and standardization across the operating systems you rely on, including Windows, Linux, Mac OS X, Solaris, AIX, and HP-UX. ActiveTcl Business and Enterprise Editions includes: Business Edition licensing is for each production or external-facing server, including virtual servers. Support Options Free Email support**