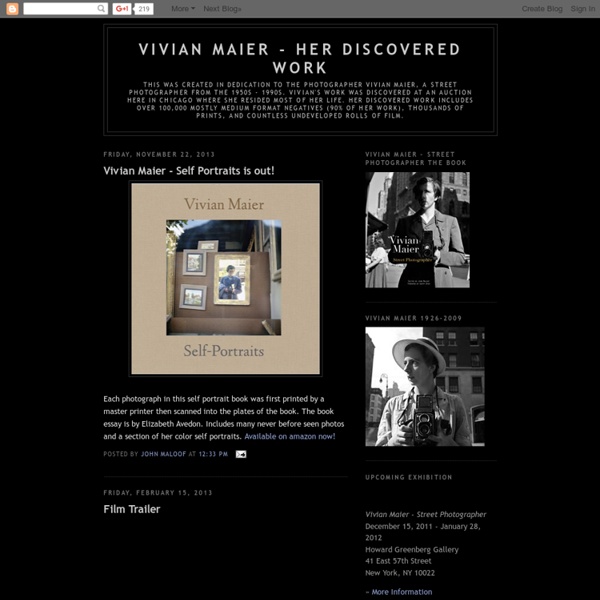 Sorry for the late update everyone but, I've been super busy. Here's what I've been up to. - Maier's PowerHouse book is in the making with their expected release around Fall of 2011. - A feature-length documentary film is production - currently spearheaded by good friend Anthony Rydzon and myself (update: and in cooperation with Mortensen Film). - Scanned and archived about 10,000 negatives with the help of Anthony Rydzon. - Vivian's first US exhibition will be at the Chicago Cultural Center.

Shockingly Surreal Self-Portraits (10 photos) Born in Madrid, Spain, Manu Pombrol is a 35-year-old artist and photographer whose self-portraits are nothing short of extraordinary. Pombrol first started down a creative path when, at a very young age, he painted pictures or portraits in pastels. Then, as computers started making their way into the mainstream, he worked in graphic design. He bought his first camera only about three years ago and that's when everything changed. In his words, "Everything started to make sense. 2011 Photography Tip #1: 5 Ways to Visualize Your Image BY Marc Silber on January 3, 2011 Want to give your photography new life in the New Year? Learn the secret of visualization from Ansel Adams. This will give you greater control over your final images.

Is Smartphone Journalism The Way Forward? PSFK has partnered with Boehringer Ingelheim to bring you a snapshot of Ten Innovative Ideas each week that are reshaping the health care industry. Continue reading below for the most exciting ideas from the past seven days. Mood-Boosting ‘Headphones’ Send Light Directly To The Brain The VALKEE Bright Light Headset is a light treatment solution for seasonal affective disorder that was designed to be worn like a pair of earbuds, shining light to a user’s brain via their ear canals. Light therapy targets the brain’s photosensitive areas which can cause depression and mood swings when not receiving enough light. The idea is that the artificial light substitutes the mood-elevating effects of the sun by channeling bright light directly to the brain.

International Center of Photography - School The School at ICP offers more than 400 courses that range from traditional film and darkroom practice to digital media. The state-of-the-art facility features black-and-white and color labs; digital labs, including resources for multimedia and digital video; and a professional shooting studio. The faculty of ICP is dedicated to nurturing new talent and represents some of the world's most accomplished and innovative practitioners, offering expert guidance and inside perspectives into the field. Students come from around the world, representing virtually every country and all ages and backgrounds, making the discussions at ICP rich and provocative.

Amazing NYC Blizzard Photographs Discovered Buried in Snow One of the photos found by Todd Bieber in NYC’s Prospect Park. When Todd Bieber stumbled upon a small canister of film buried in the aftermath of New York City’s massive blizzard, something told him he had to get it developed. What he found has prompted a genuine photography mystery. Bieber, a local filmmaker, has launched an online campaign to find the photographer of an amazing set of black-and-white photos that capture New York City during last month’s huge snowstorm. As Bieber tells it in his YouTube video, one day following the storm he decided to strap on his “crappy” cross-country skis (apparently the only practical mode of transportation at the time) and headed out to Prospect Park.

The Most Powerful Photos of the President in 2012 Though we're already four days into 2013, it's hard to not think back on all of the memorable moments in 2012. As an election year, 2012 was especially unforgettable for reelected President Barack Obama. Photographer Pete Souza was there to capture the President, his family, and the White House staff's most poignant moments throughout the year. While some images have circulated throughout the media, captivating audiences and allowing us to see the President interact with public figures like gymnast McKayla Maroney and Mayor Michael Bloomberg, others give us a more intimate view of him, one that we haven't seen before.

Back to the future Article by James Pond I am the owner of Pondly.com / art lover / electrical engineer / software developer / MBA in e-business student. I blog for pleasure and love to share my Internet findings. Web site: Irina Werning, a Buenos Aires Photographer asked friends and family to “re-enact” old photos of themselves for an ongoing project, which she christened “Back to the Future.” Did you like these photos?

Winners of the National Geographic Photo Contest 2012 Grand Prize Winner and Nature Winner Are you ready? After months of anticipation, it's finally time to reveal the winners of the 2012 National Geographic Photography Contest! Eerily Beautiful Mug Shots From 1920s Australia : The Picture Show Notice anything odd about this man? Widow Annie Birkett certainly didn't notice anything odd when she married Harry Leon Crawford, above, in 1914. So imagine her shock when "Harry" turned out to be a woman: Eugenia Falleni, who had been passing as a man since 1899. Mobile Photography Awards showcase stunning smartphone art That was taken with a phone? The winners of this year's Mobile Photography Awards may surprise you as you consider each was snapped with a smartphone. From detailed portraits from Alfred Pleyer to macro photography from Jim Mclaughlin to artistic representations from Aylin Argun, the winning selections are impressive regardless of the hardware (and software) involved.