Momsen lung. A Momsen lung in use during training The Momsen lung was a primitive underwater rebreather used before and during World War II by American submariners as emergency escape gear. 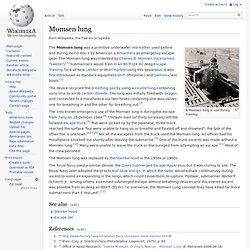 The Momsen lung was invented by Charles B. Momsen (nicknamed "Swede").[1] Submariners would train in an 80 ft (24 m) deep Escape Training Tank at New London or Pearl Harbor using this apparatus. It was first introduced as standard equipment on P- (Porpoise-) and Salmon-class boats.[2] The device recycled the breathing gas by using a counterlung containing soda lime to scrub carbon dioxide. The Momsen lung was replaced by the Steinke hood in the 1950s or 1960s. The Royal Navy used a similar device, the Davis Submerged Escape Apparatus, but it was clumsy to use. See also[edit] References[edit] Jump up ^ up ^ Blair, Clay, Jr. External links[edit] W64 Self-rescuer. The W64 Self-Rescuer The W64 Self-Rescuer is a one-time use,[1] 2.2 pound[2] personal rescue device that is carried on miners while in a mine.[3] It provides one hour of conversion from deadly CO(1% Carbon monoxide)gas to the non-fatal CO 2 gas.[4] The device produces an exothermic reaction which yields strong heat emission which is a clue to the miner that it is functioning properly. 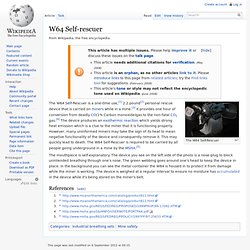 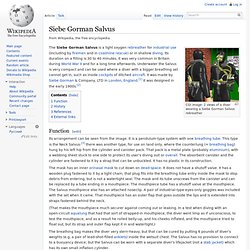 Its duration on a filling is 30 to 40 minutes. It was very common in Britain during World War II and for a long time afterwards. Underwater the Salvus is very compact and can be used where a diver with a bigger breathing set cannot get in, such as inside cockpits of ditched aircraft. Mark IV Amphibian. Not to be confused with Lake C-IV Amphibian, which is a type of aircraft [1]. 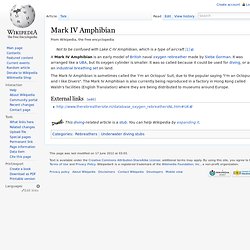 A Mark IV Amphibian is an early model of British naval oxygen rebreather made by Siebe Gorman. It was arranged like a UBA, but its oxygen cylinder is smaller. It was so called because it could be used for diving, or as an industrial breathing set on land. The Mark IV Amphibian is sometimes called the 'I'm an Octopus' Suit, due to the popular saying "I'm an Octopus and I like Divers". IDA71. 3 views of a frogman with IDA rebreather The Russian IDA71 military and naval rebreather is an oxygen rebreather intended for use by naval and military divers. 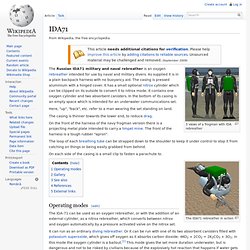 As supplied it is in a plain backpack harness with no buoyancy aid. The casing is pressed aluminium with a hinged cover. It has a small optional nitrox cylinder which can be clipped on its outside to convert it to nitrox mode. It contains one oxygen cylinder and two absorbent canisters. Here, "up", "back", etc. refer to a man wearing the set standing on land. The casing is thinner towards the lower end, to reduce drag. On the front of the harness of the navy frogman version there is a projecting metal plate intended to carry a limpet mine. SEFA. Bypass (valve) Artificial gills (human) Artificial gills are devices to let a human take in oxygen from surrounding water. 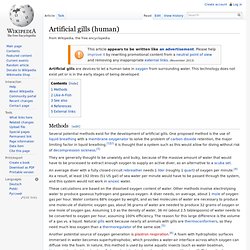 This technology does not exist yet or is in the early stages of being developed. Several potential methods exist for the development of artificial gills. One proposed method is the use of liquid breathing with a membrane oxygenator to solve the problem of carbon dioxide retention, the major limiting factor in liquid breathing.[1][2] It is thought that a system such as this would allow for diving without risk of decompression sickness.[3] They are generally thought to be unwieldy and bulky, because of the massive amount of water that would have to be processed to extract enough oxygen to supply an active diver, as an alternative to a scuba set. Another potential source of oxygen generation is plastron respiration.[6] A foam with hydrophobic surfaces immersed in water becomes superhydrophobic, which provides a water-air interface across which oxygen can diffuse into the foam.

Mouthpiece (scuba) In breathing sets, a mouthpiece is a part that the user grips in his mouth, to make a watertight seal between the breathing set and his mouth. 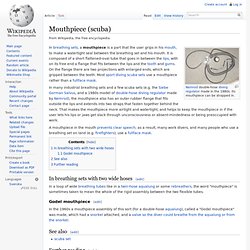 It is composed of a short flattened-oval tube that goes in between the lips, with on its free end a flange that fits between the lips and the tooth and gums. On the flange there are two projections with enlarged ends, which are gripped between the teeth. Most sport diving scuba sets use a mouthpiece rather than a fullface mask. In many industrial breathing sets and a few scuba sets (e.g. the Siebe Gorman Salvus, and a 1980s model of double-hose diving regulator made by Nemrod), the mouthpiece also has an outer rubber flange that fits outside the lips and extends into two straps that fasten together behind the neck. 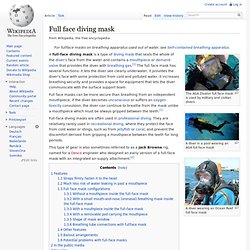 The AGA Divator full face mask is used by military and civilian divers A diver in a pool wearing an AGA full face mask A diver wearing an Ocean Reef full face mask Full face masks can be more secure than breathing from an independent mouthpiece; if the diver becomes unconscious or suffers an oxygen toxicity convulsion, the diver can continue to breathe from the mask unlike a mouthpiece which must be always gripped between the teeth.[1] Viper (rebreather) Viper-SC rebreather Viper is a new make of electronic-control closed circuit mixture rebreather made by Carleton Life Support which is fitted with the Juergensen Defense Corporation Mark V Electronic Control System. 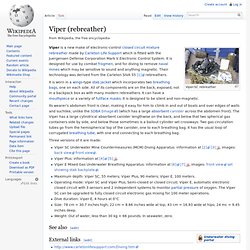 It is designed for use by combat frogmen, and for diving to remove naval mines which may be sensitive to sound and anything magnetic. Their technology was derived from the Carleton SIVA 55 [1] rebreathers. Three versions of it are made: Viper SC Underwater Mine Countermeasures (MCM) Diving Apparatus: information at [2] [3], images: back view front view.Viper Plus: information at [4] [5].Viper E Mixed Gas Underwater Breathing Apparatus: information at [6] [7], images: front view set showing stab backplate.Maximum depth: Viper SC, 55 meters; Viper Plus, 90 meters; Viper E, 100 meters.Operating mode: Viper SC and Viper Plus, Semi-closed or closed circuit; Viper E, automatic electronic closed circuit with 3 sensors and 2 independent systems to monitor partial pressure of oxygen. 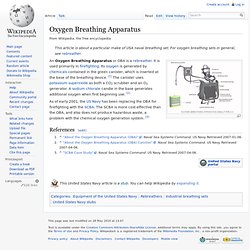 For oxygen breathing sets in general, see rebreather. An Oxygen Breathing Apparatus or OBA is a rebreather. It is used primarily in firefighting. Its oxygen is generated by chemicals contained in the green canister, which is inserted at the base of the breathing device. [1] The canister uses potassium superoxide as both a CO2 scrubber and an O2 generator. Lambertsen Amphibious Respiratory Unit. The Lambertsen Amphibious Respiratory Unit (LARU, for short) is an early model of closed circuit oxygen rebreather, used by military frogmen. Christian J. SK-1 spacesuit. SK-1 space suit SK-1 is an initialism of "Skafandr Kosmicheskiy" # 1 (Скафандр Космический = "spacesuit" or "diving suit for space") is a spacesuit that was developed specially for Yuri Gagarin.

As such, it is the first spacesuit ever used. After his successful flight on the Vostok 1 spacecraft, spacesuits of the SK series were used for space flights of other cosmonauts on Vostok spacecraft, in which the cosmonauts would eject and land separately from module. Extravehicular Mobility Unit. The Enhanced EMU Suit. The suits are white to reflect heat and to stand out against the blackness of space; the red stripes serve to differentiate astronauts. The Extravehicular Mobility Unit (EMU) is an independent anthropomorphic spacesuit that provides environmental protection, mobility, life support, and communications for astronauts performing extra-vehicular activity (EVA) in Earth orbit. Breathing set. Heliox.

Heliox is a breathing gas composed of a mixture of helium (He) and oxygen (O2). Heliox has been used medically since the 1930s, and although the medical community adopted it initially to alleviate symptoms of upper airway obstruction, its range of medical uses has since expanded greatly, mostly because of the low density of the gas.[1][2] Heliox is also used in saturation diving and sometimes during the deep phase of technical dives.[3][4] Medical uses[edit] In medicine heliox may refer to a mixture of 21% O2 (the same as air) and 79% He, although other combinations are available (70/30 and 60/40). Heliox generates less airway resistance than air and thereby requires less mechanical energy to ventilate the lungs.[5] "Work of Breathing" (WOB) is reduced. I-Suit. Hyperbaric medicine. Hyperbaric medicine, also known as hyperbaric oxygen therapy (HBOT), is the medical use of oxygen at a level higher than atmospheric pressure.

The equipment required consists of a pressure chamber, which may be of rigid or flexible construction, and a means of delivering 100% oxygen. Operation is performed to a predetermined schedule by trained personnel who monitor the patient and may adjust the schedule as required. HBOT found early use in the treatment of decompression sickness, and has also shown great effectiveness in treating conditions such as gas gangrene and carbon monoxide poisoning. More recent research has examined the possibility that it may also have value for other conditions such as cerebral palsy and multiple sclerosis, but no significant evidence has been found.