The greatest snare drum tuning trick EVER! Brazilian instruments. Social activitiesRight from the beginning, the activities of the Blocos were a lot more than participating in the carnival of Salvador. 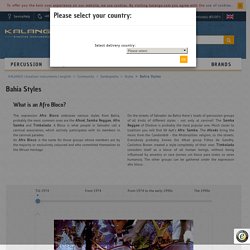 The aim was the development of a black consciousness, encouraged by various social projects inside their particular hood. Also the texts of the songs reflect this new awareness. The importance of the connection to the African patrimony is already set with the names of the Blocos. All names of the Afro Blocos descend from an African idiom, mostly from the Yoruba or a Bantu language. School- and apprenticeship projects, iniciated and run by the Blocos, increased the kids´chances. Musical development of the Afro Blocos Early timesThe hypnotic rhythms are played on the traditional Samba instruments. DevelopingThe musical directors managed to structure the rhythmic action bit by bit. GroovesIn Europe, people identify the Blocos from Salvador by their grooves.

Vic Firth. Drums. Hazelshould Vintage Drums & Cymbals. The Search For The Perfect Ride Cymbal - 10 cymbals compared by The Jazz Drums! Roy Burns Talks Tuning and Drum Head Science - Articles - The Black Page. Roy Burns holds a unique distinction among drummers in that he has sustained a successful career as a player, clinician, author, educator and manufacturer. 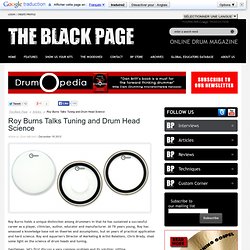 At 78 years young, Roy has amassed a knowledge base not on theories and assumptions, but on years of practical application and hard science. Roy and Aquarian's Director of Marketing & Artist Relations, Chris Brady, shed some light on the science of drum heads and tuning. Gentlemen, let's first discuss a very common problem and its solution: pitting. Roy Burns: I’ve got several observations. One is if the bead of the drumstick is round – like a ball end – it’ll deadhead like crazy. The next thing is, we’ve always heard this old line about “pulling the sound out of the drum.” Chris Brady: One thing I’ve noticed that can affect the pitting of the drum head is the actual angle of the drum – especially on tom heads. We all have our formulas on this, but what is the best way to seat a head? RB: Basically it’s a myth. Behringer B205D. 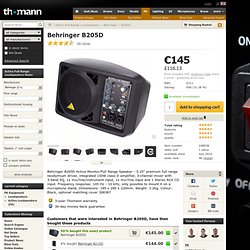 It is wonderfully featured and has enough punch to make it a good option for close monitoring, even in a live band situation. It has proven to be surprisingly tough, given that it's used in every weekend and is being transported from place to place in the back of a car, in all weather/conditions. I'm beginning to sound like a Behringer employee (which I am not!) If you need a compact, versatile monitor which you can use in all manner of different ways, you really won't find anything better at less than twice the price of this one. Good alternative to wedge monitors Wibbers on 15.05.2013 I never really got on with floor (wedge) monitors; in my band we don't often have the luxury of a front of house sound engineer and so have to do monitoring ourselves. 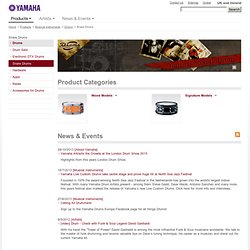 Sign up to the Yamaha Drums Europe Facebook page for all things Drums! 9/5/2012 [Artists] [video] Drum - Check with Funk & Soul Legend David Garibaldi With his band the “Tower of Power” David Garibaldi is among the most influential Funk & Soul musicians worldwide. Pearl. With no assembly line boundaries and no mass production compromises, Masterworks drums truly represent all that is possible. 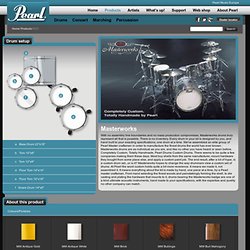 There is no inventory. Every drum in your kit is designed by you, and hand built to your exacting specifications, one drum at a time. We've assembled an elite group of Pearl Master craftsmen in order to manufacture the finest drums the world has ever known. Masterworks drums are as individual as you are, and like no other you have heard or seen before. Completely Custom, Totally Handmade, Pearl Drums Custom Drums. DW.