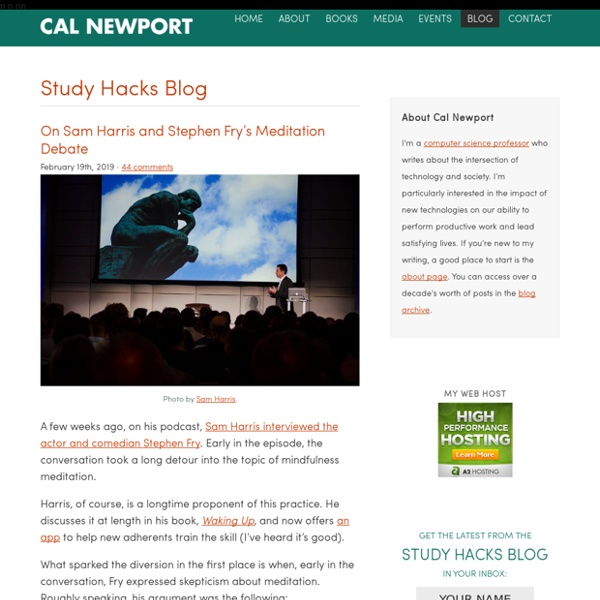 On Sam Harris and Stephen Fry’s Meditation Debate February 19th, 2019 · 44 comments A few weeks ago, on his podcast, Sam Harris interviewed the actor and comedian Stephen Fry. Early in the episode, the conversation took a long detour into the topic of mindfulness meditation. Harris, of course, is a longtime proponent of this practice. He discusses it at length in his book, Waking Up, and now offers an app to help new adherents train the skill (I’ve heard it’s good). What sparked the diversion in the first place is when, early in the conversation, Fry expressed skepticism about meditation. Harris’s response was to compare meditation to reading. Fry, who is currently using and enjoying Harris’s meditation app, conceded, and the discussion shifted toward a new direction. I wonder, however, whether Fry should have persisted. Read more » Minimalism Grows… February 8th, 2019 · 31 comments Before I do, two quick notes: On to the publicity updates: The Beginning of a Digital Revolution? Myth Confirmed

3×5 Challenging Authority Since 1978 I am a writer, traveler, and entrepreneur with the goal of visiting every country in the world while connecting with other world-changers. Continue reading about Chris How And Why To Keep A “Commonplace Book” The other day I was reading a book and I came across a little anecdote. It was about the great Athenian general Themistocles. Before the battle of Salamis, he was locked in a vigorous debate with a Spartan general about potential strategies for defeating the Persians. Themistocles was clearly in the minority with his views (but which ultimately turned out to be right and saved Western Civilization). He continued to interrupt and contradict the other generals. Finally, the Spartan general threatened to strike Themistocles if he didn’t shut up and stop.

How to Ace Calculus: The Art of Doing Well in Technical Courses November 14th, 2008 · 97 comments Tangent Troubles Calculus is easy. Or at least, it can be. Hacking Knowledge: 77 Ways to Learn Faster, Deeper, and Better If someone granted you one wish, what do you imagine you would want out of life that you haven’t gotten yet? For many people, it would be self-improvement and knowledge. Newcounter knowledge is the backbone of society’s progress. Great thinkers such as Leonardo da Vinci, Thomas Edison, Benjamin Franklin, Albert Einstein, and others’ quests for knowledge have led society to many of the marvels we enjoy today.

Listen to What Innovators Don't Talk About - Michael Schrage by Michael Schrage | 4:54 PM January 25, 2012 While working away on my laptop at a hotel breakfast, I couldn’t help but overhear the four gentlemen poring over an iPad two tables way. Their intense discussion revolved around rolling out their high-tech prototypes in a medical care complex. Since I’ve written about prototypes and prototyping, I couldn’t help but eavesdrop. Forgive me. The foursome represented a mix of medical care complex personnel and what was clearly an entrepreneurial innovator with a potentially high-impact idea.

These are the most common life mistakes that young people make I quit college and used the money to buy a car. The car was a used Honda Civic. I drove around for a few hours and then I dropped the car back off at the dealership and cancelled the check and went back to college. professional education - What "hacking" competitions/challenges exist? I don't know a good reference to point to for further reading. Thus I will try to list a few time-wasters that I personally enjoy. In the following I will allow myself to differentiate between various styles of hacking competitions. Brain Hacks ...For answer Holmes clapped the hat upon his head. It came right over the forehead and settled upon the bridge of his nose. "It is a question of cubic capacity, " said he; "a man with so large a brain must have something in it.

Wanted: Idea Fusers - Bronwyn Fryer - Our Editors by Bronwyn Fryer | 9:40 AM February 7, 2012 It’s become pretty much common knowledge that great innovation springs from the ability to pull two unlike things together to create a beautiful third. Steve Jobs famously shifted a paradigm when he fused calligraphy with technology to create the Mac’s graphical user interface.