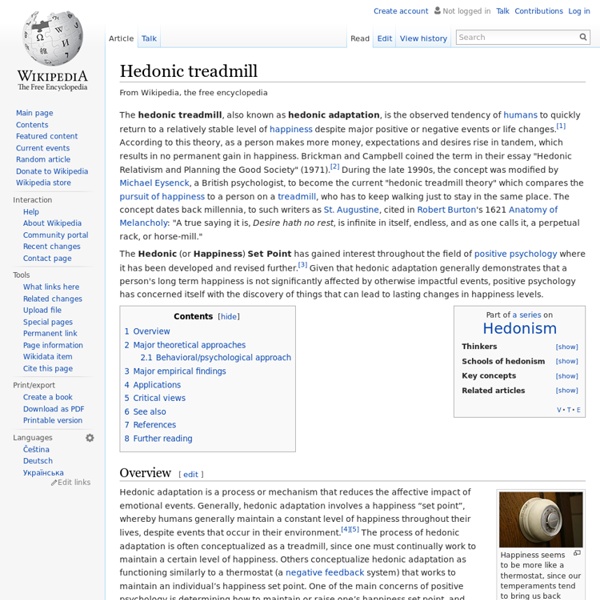 The Hedonic (or Happiness) Set Point has gained interest throughout the field of positive psychology where it has been developed and revised further.[3] Given that hedonic adaptation generally demonstrates that a person's long term happiness is not significantly affected by otherwise impactful events, positive psychology has concerned itself with the discovery of things that can lead to lasting changes in happiness levels. Overview[edit] Happiness seems to be more like a thermostat, since our temperaments tend to bring us back towards a certain happiness level (a tendency influenced by carefully chosen activities and habits). Hedonic adaptation is a process or mechanism that reduces the affective impact of emotional events. Hedonic adaptation can occur in a variety of ways. Major theoretical approaches[edit] Behavioral/psychological approach[edit] Major empirical findings[edit] Wildeman, Turney, Schnittker (2014) studied the effects of imprisonment on one’s baseline level of well-being.

Kinetica Artfair - Lucia 3 LUCIA No.03 is an innovative kinetic device which invokes a unique visual experience in the viewer’s mind; an artwork created by the individuals’ brain. Controlled by patented hard and software, LUCIA No.03 uses a combination of flickering LEDs and constant light to stimulate the brains’ alpha waves and produce an optical experience, which is entirely unique to the viewer. Whilst sitting in front of the light, moving gently with eyes shut, the viewers’ mind automatically creates a series of images, taking them on their own personal visual journey. Developed by Dr. Art, Light, Brain and Mind. In these changing times LUCIA No.03 challenges traditional notions of what art is and its role in society.

Michael Eysenck Michael William Eysenck (born 8 February 1944)[1] is a British academic psychologist, and is an emeritus professor in psychology at Royal Holloway, University of London. He also holds an appointment as Professorial Fellow at Roehampton University.[1] His research focuses on cognitive factors affecting anxiety. Eysenck has written and co-written many publications, including several textbooks. In the late 1990s, he developed the theory of the 'hedonic treadmill',[2] stating that humans are predisposed by genetics to plateau at a certain level of happiness, and that the occurrence of novel happy events merely elevates this level temporarily. He is the son of the noted psychologist Hans Jürgen Eysenck. Research interests[edit] Eysenck's research focuses mainly on cognitive factors associated with anxiety in normal and clinical populations. Specific interests: Cognitive factors in anxiety, including clinical anxiety and implications for therapy. Career history[edit] Portrait[edit]

Mind Hacks Happiness economics Subject classifications[edit] The subject may be categorized in various ways, depending on specificity, intersection, and cross-classification. For example, within the Journal of Economic Literature classification codes, it has been categorized under: Welfare economics at JEL: D63 – Equity, Justice, Inequality, and Other Normative Criteria and Measurement[1]Health, education, and welfare at JEL: I31 – General Welfare; Basic needs; Living standards; Quality of life; Happiness[3]Demographic economics at JEL:J18 – Public Policy.[4] Metrology[edit] Given its very nature, reported happiness is subjective.[5] It is difficult to compare one person’s happiness with another's.[1] It can be especially difficult to compare happiness across cultures.[1] However, many happiness economists believe they have solved this comparison problem. Micro-econometric happiness equations have the standard form: .[1] In this equation is the reported well-being of individual at time , and Determinants[edit] Leisure[edit]

The Daily Mind – Making the Daily Grind Meaningful A survey of ecological economics Brain Fitness and Cognitive Health Authority: Market Research and Advisory Services Hedonic regression An attribute vector, which may be a dummy or panel variable, is assigned to each characteristic or group of characteristics. Hedonic models can accommodate non-linearity, variable interaction, or other complex valuation situations. Hedonic models are commonly used in real estate appraisal, real estate economics and Consumer Price Index (CPI) calculations. In CPI calculations hedonic regression is used to control the effect of changes in product quality. Price changes that are due to substitution effects are subject to hedonic quality adjustments. Hedonic pricing method[edit] Certain environmental services often influence the market prices. This method finds its application to reveal the effect of environmental attributes in changes in the local real estate pricing. The overall quality of the environment in terms of air pollution, water pollution and noiseEnvironmental amenities which include aesthetic sights and closeness to recreational sites such as parks, beaches, etc. Advantages[edit]

How our society breeds anxiety, depression and dysfunction This article originally appeared on Alternet. Severe, disabling mental illness has dramatically increased in the United States. “The tally of those who are so disabled by mental disorders that they qualify for Supplemental Security Income (SSI) or Social Security Disability Insurance (SSDI) increased nearly two and a half times between 1987 and 2007 — from one in 184 Americans to one in 76. For children, the rise is even more startling — a thirty-five-fold increase in the same two decades,” as Marcia Angell summarizes in the New York Times Book Review. Angell also reports that a large survey of adults conducted between 2001 and 2003 sponsored by the National Institute of Mental Health found that at some point in their lives, 46 percent of Americans met the criteria established by the American Psychiatric Association for at least one mental illness. In 2011, the U.S. Over-Diagnosis, Pathologizing the Normal, and Psychiatric Drug Adverse Effects DSM-5 was published in May 2013.