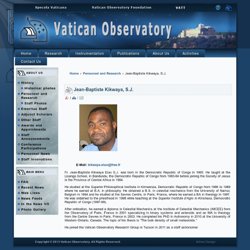 He obtained a B.S. in celestial mechanics from the University of Namur, Belgium in 1994 and he studied at the Sevres Centre, in Paris, France, where he earned a BA in theology in 1997. He was ordained to the priesthood in 1998 while teaching at the Superior Institute d’Agro in Kinshasa , Democratic Republic of Congo (1997-99). He joined the Vatican Observatory Research Group in Tucson in 2011 as a staff astronomer. 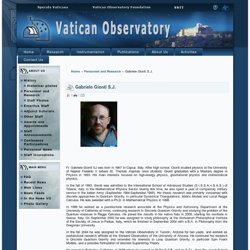 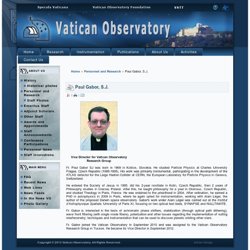 Paul Gabor SJ was born in 1969 in Košice, Slovakia. He studied Particle Physics at Charles University Prague, Czech Republic (1988-1995). David A. Brown, S.J. Father David Brown SJ is a member of the New Orleans Province of the Society of Jesus. 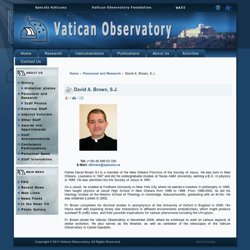 He was born in New Orleans, Louisiana in 1967 and did his undergraduate studies at Texas A&M University, earning a B.S. in physics in 1988. He was admitted into the Society of Jesus in 1991. As a Jesuit, he studied at Fordham University in New York City where he earned a masters in philosophy in 1995, then taught physics at Jesuit High School in New Orleans from 1996 to 1998. From 1999-2002, he did his theology studies at the Weston School of Theology in Cambridge, Massachusetts, graduating with an M.Div. Richard P. Boyle, S.J. Fr. 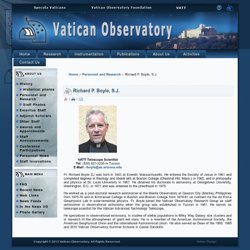 Richard Boyle SJ was born in 1943 at Everett, Massachusetts. He entered the Society of Jesus in 1961 and completed degrees in theology and liberal arts at Boston College (Chestnut Hill, Mass.) in 1965, and in philosophy and physics at St. Louis University in 1967. He obtained his doctorate in astronomy at Georgetown University, Washington, D.C. in 1971 and was ordained to the priesthood in 1975. He worked as a post-doctoral research astronomer at the Manila Observatory at Quezon City (Manila), Philippines from 1975-76 and at Emmanuel College in Boston and Boston College from 1978-81 on contract for the Air Force Geophysics Lab in solar-terrestrial physics. 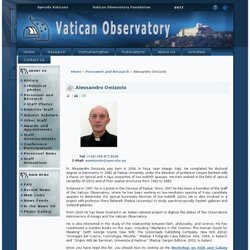 Alessandro Omizzolo was born in 1956, in Foza, near Asiago, Italy. He completed his doctoral degree in Astronomy in 1982 at Padua University under the direction of professor Cesare Barbieri with a thesis on Optical and X-rays properties of low-redshift quasars. He then worked in the field of optical variability of QSOs and of their spatial structures from 1982 to 1985. Ordained in 1987, he is a priest in the Diocese of Padua. Since 1997 he has been a member of the staff of the Vatican Observatory, where he has been working on low-resolution spectra of X-ray candidate quasars to determine the optical luminosity function of low-redshift QSOs.

From 2000 he has been involved in an Italian national project to digitize the plates of the Osservatorio Astronomico di Asiago and the Vatican Observatory. He is also interested in the study of the relationship between faith, philosophy, and science. Paul Mueller, S.J. Józef M. Maj, S.J. Sabino Maffeo, S.J. William R. Stoeger, S.J. Fr. 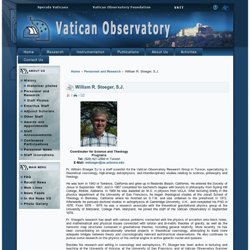 William Stoeger SJ is a staff scientist for the Vatican Observatory Research Group in Tucson, specializing in theoretical cosmology, high-energy astrophysics, and interdisciplinary studies relating to science, philosophy and theology.