Women who changed the world 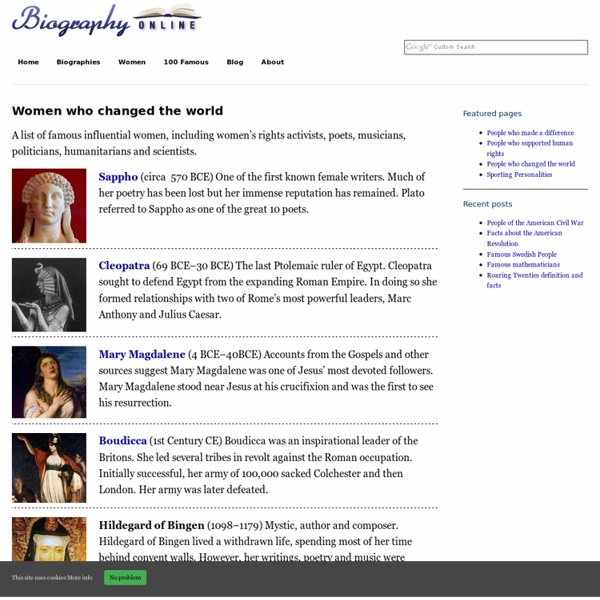 A list of famous influential women, including women’s rights activists, poets, musicians, politicians, humanitarians and scientists. Sappho (circa 570 BCE) One of the first known female writers. Much of her poetry has been lost but her immense reputation has remained. Plato referred to Sappho as one of the great 10 poets. Cleopatra (69 BCE–30 BCE) The last Ptolemaic ruler of Egypt. Cleopatra sought to defend Egypt from the expanding Roman Empire. Mary Magdalene (4 BCE–40BCE) Accounts from the Gospels and other sources suggest Mary Magdalene was one of Jesus’ most devoted followers. Boudicca (1st Century CE) Boudicca was an inspirational leader of the Britons. Hildegard of Bingen (1098–1179) Mystic, author and composer. Eleanor of Aquitaine (1122–1204) The first Queen of France. Joan of Arc (1412–1431) The patron saint of France, Joan of Arc inspired a French revolt against the occupation of the English. Mirabai (1498–1565) Indian mystic and poet. Susan B. Queen Elizabeth II Related pages:

Charlie And The Chocolate Factory For the first time in a decade, Willy Wonka, the reclusive and eccentric chocolate maker, is opening his doors to the public--well, five members of the public, actually. The lucky five who find a Golden Ticket in their Wonka bars will receive a private tour of the factory, given by Mr Wonka himself. For young Charlie Bucket, this a dream come true. Book Author: Roald Dahl Important Women Through History A List of Women Achievers Explore this list of over 30 women of achievement. You can nominate one of these women or someone else to the Honor Roll of Notable Women. This page includes links outside of Scholastic.com Every Web site we link to was visited by our team at one point in time to make sure it's appropriate for children. But we do not monitor or control these sites and these sites can change. In addition, many of these sites may have links to other sites which we have not reviewed.

World's Famous Women Leaders Women have been at the forefront of politics for quite a while now. They have ruled since the dawn of time. Egyptian queens governed the Mesopotamian area as early as 3000 BC. Women became members of parliament in East European countries after the Great War. 10 Best Free Listening Websites with Quizzes to Practise for Listening Exams So what do you do to practise listening for exams? Growing up, I never had the opportunity to do any extra practice to improve my listening skills. We didn’t have the Internet and the thousand possibilities it offers to learners of any language nowadays. The teachers had an old tape player that sometimes stopped and started on its own and old tapes that ended up sounding distorted and most of the times unlistenable so if you wanted to get better at listening, you just listened to the radio and struggled to understand the lyrics and sing along. Not that I ever complained. That was the perfect excuse to listen to music while claiming to be working hard.

8 Truly Feminist Lessons From Jane Austen That Every 21st Century Woman Can Use As she established herself as a serious writer, Jane Austen showed us all that her bread and butter were her women's stories. Her badass-ness manifested in proving that that novels written by women about women can uncover real truths, challenge, and unseat any reader — and, come on, is there any more feminist statement than women are (gasp!) human beings who are just as complex and interesting as men? I think not. In fact, I know not.

Women's History Month Activities, History, Timelines, Ideas, Events, Facts & Quizzes Women's History Month is observed every March in the United States. Learn about the history of Women's History Month, read biographies of famous women, try our quizzes and crosswords, find stats and facts about women, and more. History and Timelines Learn about famous firsts by women, read the history of women's history month, and find information about milestones in women's history. Women Leaders 365 Creative Writing Prompts As an Amazon Associate I earn from qualifying purchases. Thank you for your support! Sharing is caring! Famous Black Women Women have been discriminated against throughout the ages, but in spite of the hostility and prejudice, some women simply refused to give up and carried on with their journey to reach the pinnacle of success. Their stories are the stories of perseverance and determination. The names that grace this article have been, and are an inspiration to the billions of women out there. Women have been breaking barriers around the world and changing the way the world functions.

Christmas Traditions and Celebrations Worldwide On this page you can read some fun facts about Christmas around the World. Read how kids celebrate Christmas and get some interesting insights about Christmas traditions and celebrations. At Christmas, Christians all over the world celebrate the birth of Jesus Christ. Traditional Christmas decoration often can be admired and festive celebrations can be joined in most countries, even in many of the countries where Christianity is not the religion of the majority of people. Controversial Subjects in the Classroom Overview: Invariably, issues are raised in classrooms that bring charged responses from students. How can educators set the stage for safe, respectful dialogue and learning? Three students in a college Shakespeare course I taught accused me of trying to make them say two female characters in A Midsummer Night's Dream were lesbians. Since my lesson plan involved Shakespearean diction and close reading, I didn't take them seriously. I laughed. My response made the students even angrier, and they stormed out of the room, one gliding defiantly out on roller blades.

A century of distinction: 100 women who changed the world - News - People - The Independent To celebrate the occasion, The Independent on Sunday today salutes 100 women who have changed the world for ever and for the better, and who are drawn from all walks of life. The IoS's top female minds came together to make their selections; the only restriction facing them was that the candidates should be British and have made their lasting contribution during the past 100 years. But, though the rules were minimal, debate was long – and heated – as thousands of deserving candidates were whittled away to arrive at this magnificent roll of honour: undeniably subjective, but unquestionably fascinating. We would, of course, welcome your thoughts about those who are on the list – and about those we did not, but should have, featured.