This Labor Ruling Could Give a Big Boost to the Fight For 15. Virginia Gunman Was Ordered by TV Station Bosses to Seek Medical Help. The man who shot dead two former colleagues as they carried out a live broadcast had a long history of behavioral issues at work, it was revealed on Thursday. 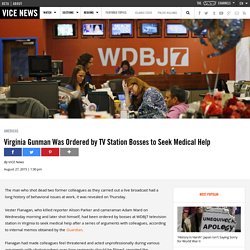 Vester Flanagan, who killed reporter Alison Parker and cameraman Adam Ward on Wednesday morning and later shot himself, had been ordered by bosses at WDBJ7 television station in Virginia to seek medical help after a series of arguments with colleagues, according to internal memos obtained by the Guardian. Flanagan had made colleagues feel threatened and acted unprofessionally during various arguments with photographers over how segments should be filmed, reported the newspaper, leading to official warnings and ultimately to his dismissal in February 2013. 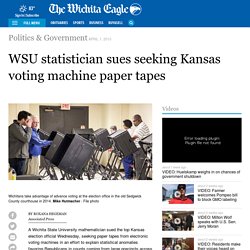 Beth Clarkson, chief statistician for the university’s National Institute for Aviation Research, filed the open records lawsuit in Sedgwick County District Court as part of her personal quest to find the answer to an unexplained pattern that transcends elections and states. Under John Kasich, Ohio's Charter Schools Became a "National Joke" John Kasich: David Becker/ZUMA; Imagine Columbus Primary Academy: Google Maps; Charter school students: Maryland GovPics/Flickr When Leon Sinoff was asked to sign off on a building lease for Imagine Columbus Primary Academy in Columbus, Ohio, in the summer of 2013, he had little reason to be skeptical. 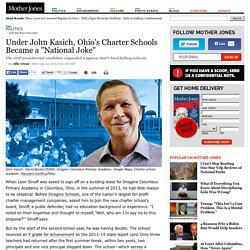 Before Imagine Schools, one of the nation's largest for-profit charter management companies, asked him to join the new charter school's board, Sinoff, a public defender, had no education background or experience. "I relied on their expertise and thought to myself, 'Well, who am I to say no to this proposal? '" Here's Why it Makes Perfect Sense That Josh Duggar Cheated  The U.S. Government's Department of Health Finally Admits That Marijuana Kills Cancer. Throughout history the main reasons human beings willfully kill other human beings are religion and greed. 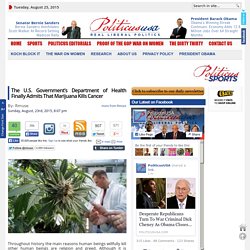 Although it is surprising that people steeped in a religion that worships a “loving god” revels in killing other humans, it is part of the “convert or kill” mindset that one the major Abrahamic religions, Christianity thrives and prospers on. It is not as surprising that human beings kill others out of greed, but for an industry that claims it exists to “save lives and heal infirmity,” it is astonishing that the pursuit of profit drives their pursuit of death and sickness. For the medical industrial complex, there is nothing as terrifying as a cure, or remedy, for a highly profitable and fatal disease like cancer.

Some of the other NIH studies have shown that cannabinoids reduce the risk of colon cancer, and are effective in its treatment. The Email Trail That Proves Scott Walker’s Collusion. The emails show Milwaukee County employees worked on Walker’s campaign during office hours. 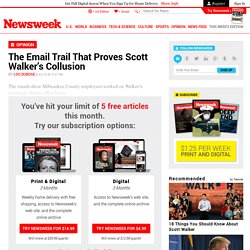 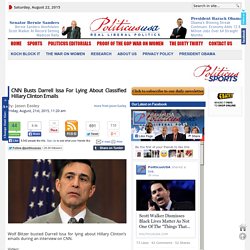 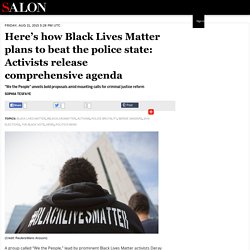 Campaign Zero launched today on a glossy website that read, “we can live in a world where the police don’t kill people by limiting police interventions, improving community interactions, and ensuring accountability”: Writing that “it will take deliberate action from policy-makers at all levels of government to implement these policy solutions,” the coalition of protestors outlined proposals in 10 different areas and called for new laws at the federal and state level.

“We must end police violence so we can live and feel safe in this country,” their website reads. Noam Chomsky: Why America Is the Gravest Threat to World Peace. To stay on top of important articles like these, sign up to receive the latest updates from TomDispatch.com here. 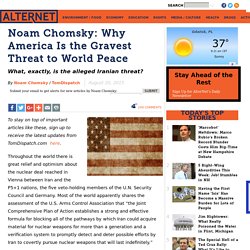 Throughout the world there is great relief and optimism about the nuclear deal reached in Vienna between Iran and the P5+1 nations, the five veto-holding members of the U.N. Security Council and Germany. Most of the world apparently shares the assessment of the U.S. Arms Control Association that “the Joint Comprehensive Plan of Action establishes a strong and effective formula for blocking all of the pathways by which Iran could acquire material for nuclear weapons for more than a generation and a verification system to promptly detect and deter possible efforts by Iran to covertly pursue nuclear weapons that will last indefinitely.”

There are, however, striking exceptions to the general enthusiasm: the United States and its closest regional allies, Israel and Saudi Arabia. “The Greatest Threat” Opponents of the nuclear deal charge that it does not go far enough. How Much Of California's Drought Was Caused By Climate Change? Scientists Now Have The Answer. Over the last few years, as California’s historic, four-year drought has intensified, scientists have found clues linking the extreme weather event to human-caused climate change. 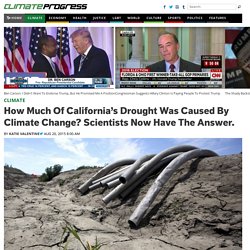 Now, a new study is the first to estimate just how much climate change contributed to the drought. The study, published Thursday in Geophysical Research Letters, found that climate change can be blamed for between 8 to 27 percent of the drought conditions between 2012 and 2014 and between 5 to 18 percent in 2014. Two Brothers Allegedly Beat Up A Latino Man, Say They Were Inspired By Donald Trump. A pair of siblings in Boston, Massachusetts targeted and ambushed a 58-year-old homeless Latino man because one brother was “inspired in part” by 2016 Republican presidential candidate Donald Trump, the Boston Globe reported. 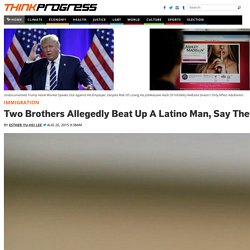 Police arrived on the scene early Wednesday to a homeless man covered in urine, whose nose was broken and chest and arms were battered. The victim told police that “he was awakened by two men urinating on his face.” He said they ripped away his blankets and sleeping bag, hit him in the face and the head, and punched him several times. According to the Boston Globe, several witnesses saw the homeless man being attacked. The perils of “Growth Mindset” education: Why we’re trying to fix our kids when we should be fixing the system. One of the most popular ideas in education these days can be summarized in a single sentence (a fact that may help to account for its popularity). Man Accidentally Shoots Self While Guarding 'Muslim-Free' Oktaha. OKTAHA, Oklahoma - The Muskogee County sheriff said a member of the group guarding an Oktaha gun shop accidentally shot himself Tuesday. Sheriff Charles Pearson said the man dropped his gun and a bullet hit him in the arm.

The sheriff did not identify the man or offer any other details about what happened. The group of armed citizens and veterans is standing guard outside the Save Yourself Survival and Tactical Gear store after the owners said they received death threats from all over the world for putting up a sign saying Muslims weren't welcome. 8/17/2015: Related Story: Armed Citizens Protect Oktaha Family After Threats Over Controversial Sign. Israel shocked by image of soldiers forcing violinist to play at roadblock. Madeleine Albright To Jeb: Stop Blaming Obama For Your Brother’s Iraq Debacle.

Republican presidential candidate Jeb Bush has been on a mission to rewrite history and fool the American people into believing that President Obama and Hillary Clinton are to blame for the rise of ISIS/ISIL/Daesh in the Middle East. ‘Budrus’ Becomes Part of a Palestinian Debate. A Tale of Two Beaches: Tel Aviv and Gaza. On July 25, 2015 The Washington Post carried an article by its Jerusalem correspondent, William Booth, on Israelis celebrating the one-year anniversary of Israel’s war on Gaza. Search the 935 Iraq War false statements. In a widely-reported study of orchestrated deception, the Center found that President Bush and seven top officials made 935 false statements leading up to the Iraq war — and offer them in a database for all to see.

Secretary of State Colin Powell followed close behind with 244 false statements about weapons of mass destruction and 10 about Al Qaeda links. 935 Lies (and Counting): Study Documents Bush Admin’s False Statements Preceding Iraq War. The Bully’s Pulpit - The Baffler. In late February and early March 1991, during the first Gulf War, U.S. forces bombed, shelled, and otherwise set fire to thousands of young Iraqi men who were trying to flee Kuwait. Weed, Whitewashed - The Baffler. Integrity: The Child Scott Walker Left Behind. Oath Keepers and the Age of Treason. ‘Marry before your house is swept away’: Climate change is giving child marriages a boost. Updated: August 9, 2015 9:44 am. Why conservative billionaires have started talking like Bernie Sanders: “We are creating a caste system from which it’s almost impossible to escape”

I’ve written previously about the growing fear among elites that they’ve pushed economic inequality too far. That fear is proliferating, according to a New York Times Op-Ed this weekend by former marketing conglomerate CEO Peter Georgescu. 15 Youth Movements to Dismantle White Supremacy Rising This Summer. 1. The Root of a Movement On April 20, Judge Dennis Porter dismissed charges against Chicago police officer Dante Servin in the killing of 22 year-old Rekia Boyd on the basis of technical differences between involuntary manslaughter and first degree murder.

Since then, the Chicago chapter of Black Youth Project 100 has organized nationally and locally to ensure that Servin is fired without a pension from the Chicago Police Department. We have staged several direct actions and testified in front of the CPD Police Review Board every month to demand Servin’s termination. It is our duty as an organization with a black queer feminist lens to center on the lives of black women that are victims of state violence. Zinn Coeditor: That All "Voices" Make History Is a "Dangerous Idea to Those in Power" The Head of the IMF Says Inequality Threatens Democracy. Here Are 7 Charts Proving She's Right. Joseph E. Stiglitz: The People Who Break the Rules Have Raked in Huge Profits and Wealth and It's Sickening Our Politics. What the 1% Don't Want Us to Know. Wing-nut conspiracy theorists have done it again: The truth about the Planned Parenthood hoax revealed. Right-wing push to deny federal funds to Planned Parenthood is a gigantic hoax - Blogs - The Leavenworth Times - Leavenworth, KS.