Japanese Nagasaki bomb survivor reveals scars 70 years later. On August 9, 1945, America dropped its second atomic bomb in three daysSumitery Taniguchi, 86, was just 16 at the time of the devastating blastHe was thrown from his bicycle and his teenage body was nearly torn apartSkin hanging from his back, shoulder and arm, he wandered for three daysNow 70 years on, he reveals his scars in his struggle against nuclear arms By Imogen Calderwood For Mailonline Published: 08:47 GMT, 8 August 2015 | Updated: 14:10 GMT, 8 August 2015 The frail 86-year-old body of Sumitery Taniguchi is a web of scars, that have criss-crossed his skin for 70 years. 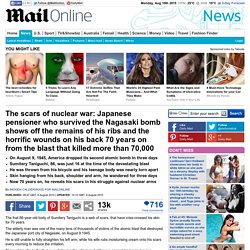 The elderly man was one of the many tens of thousands of victims of the atomic blast that destroyed the Japanese port city of Nagasaki, on August 9 1945. He is still unable to fully straighten his left arm, while his wife rubs moisturising cream onto his scars every morning to reduce the irritation. Artist Filippo Ioco disguises naked models as food and drink with body paint. Artist Filippo Ioco merges body painted models with still life shots of food and drinksThe Italian-born artist paints and shoots his model before blending the photos with a still life on a computerThe 47-year-old's creations include a range of desserts, vegetables, a hamburger and cocktails By Sara Malm for MailOnline Published: 11:54 GMT, 10 August 2015 | Updated: 14:33 GMT, 10 August 2015 A Swiss artist has been devoting his time to turning the human body into something that, quite literally, looks good enough to eat. 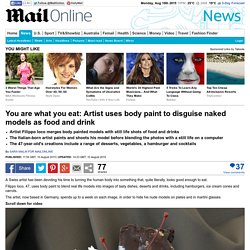 Filippo Ioco, 47, uses body paint to blend real life models into images of tasty dishes, deserts and drinks, including hamburgers, ice cream cones and carrots. Federal lawsuit could reveal evidence of Saudi complicity in 9/11. A congressional intelligence report had the explosive pages redactedThe two men who authored them are likely to be called to appear in courtThe lawsuit has been brought by victims' families against Saudi kingdomSuit claims links between two hijackers and former Saudi figures in US By Tim Macfarlan For Mailonline Published: 10:15 GMT, 10 August 2015 | Updated: 13:13 GMT, 10 August 2015 A federal lawsuit could reveal details implicating the Saudi government in 9/11. 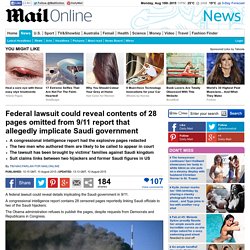 A congressional intelligence report contains 28 censored pages reportedly linking Saudi officials to two of the Saudi hijackers. The Obama administration refuses to publish the pages, despite requests from Democrats and Republicans in Congress. The World Trade Center south tower burst into flames after being struck by hijacked United Airlines Flight 175 on September 11, 2001. They did so while working for the independent 9/11 Commission, from whose final report the most grave allegations against the Saudis were stricken. Man gored by bull in Toledo as he filmed it charging at Spanish festival. WARNING: GRAPHIC CONTENT The man was gored in the neck as he filmed an unconscious bull in ToledoThe 32-year-old died when another animal surprised him from behindBull targeted the victim, throwing him up in the air 'like a puppet'Local mayor said the incident 'sent shivers' down organisers' spines By Gerard Couzens In Madrid For Mailonline Published: 19:05 GMT, 9 August 2015 | Updated: 13:34 GMT, 10 August 2015 This is the shocking moment a man was gored to death after trying to film a bull run on his mobile phone. 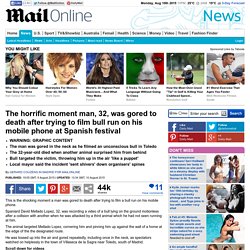 Spaniard David Mellado Lopez, 32, was recording a video of a bull lying on the ground motionless after a collision with another when he was attacked by a third animal which he had not seen running at him. The animal targeted Mellado Lopez, cornering him and pinning him up against the wall of a home at the edge of the the designated route. ISS astronauts to eat vegetables grown in space in step towards Mars mission. A crop of lettuce has been harvested from the ISS plant growth systemHalf of the crop will be eaten and half will be sent to Earth for analysisProviding astronauts with fresh food is crucial for manned mission to MarsTending the plants is also a valuable past-time for long distance trips. 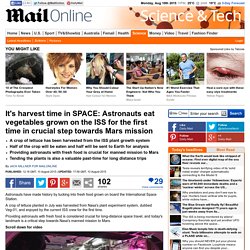 What the Earth would look like without oceans. Half a century of research, and 14,500 samples, has been compiled to make first ever digital map of seabedInteractive map reveals deep ocean basins and microfossil remains on the surface beneath miles of sedimentLast full map created of the Earth's seafloor, which makes up 70 per cent of the planet, was hand-drawn in 1970 By Mia De Graaf For Dailymail.com Published: 18:42 GMT, 10 August 2015 | Updated: 20:17 GMT, 10 August 2015 This is the first ever digital map of the Earth's seafloor, revealing deep ocean basins to be much more complex than previously thought. 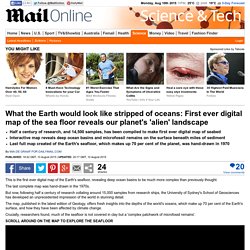 The last complete map was hand-drawn in the 1970s. Is the world's most scenic highway? China unveils new seven mile road that's built in the middle of a river valley  New route connects Xingshan County in Hubei to a high-speed motorwayIt officially opened on August 9 and has been dubbed 'over-water highway' It cuts an hour's journey to just 20 minutes and there's great views en route6.8 mile road is built on top of a bridge and follows the curve of river valley. 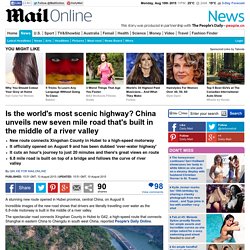 The plant that could save France's honey bees from 'the hornet from hell' Asian hornet arrived in France from China in a pottery shipment in 2004It has decimated France's bee population and damaged honey productionThe North American Sarracenia plant can attract and eat the insectsPheromones from the plant could be used to build a commercial trap By Fiona Macrae Science Correspondent For The Daily Mail Published: 17:33 GMT, 10 August 2015 | Updated: 18:48 GMT, 10 August 2015 A hornet species that has killed at least six people in France and devastated honey production may have met its match – in the form of a carnivorous plant. 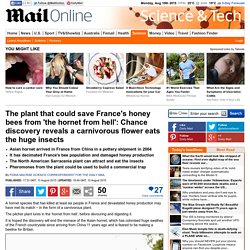 The pitcher plant lures in the ‘hornet from hell’, before devouring and digesting it. It is hoped the discovery will end the menace of the Asian hornet, which has colonised huge swathes of the French countryside since arriving from China 11 years ago and is feared to be making a beeline for Britain. The yellow-footed insect’s searing sting can trigger fatal allergic reactions and has been likened to a hot nail being hammered into a body. 4,000-year-old skeletons of mother and child found in in Qinghai locked in embrace. Skeletal remains show mother on her knees with arms around child as she protected him from disaster in China The astounding discovery was made by experts on the Bronze Age archaeological site in Qinghai province 'Pompeii of the East' is believed to have been hit by a catastrophic earthquake and flooding in around 2,000BC By Emily Chan For Mailonline Published: 16:05 GMT, 10 August 2015 | Updated: 20:07 GMT, 10 August 2015 The loving embrace of a mother and child has lasted 4,000 years, as Chinese archaeologists found when they discovered their interlocked skeletons. 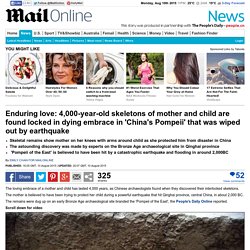 The mother is believed to have been trying to protect her child during a powerful earthquake that hit Qinghai province, central China, in about 2,000 BC. The remains were dug up on an early Bronze Age archaeological site branded the 'Pompeii of the East', the People's Daily Online reported. A car MELTS in the sun during a heatwave of 100F in Italy. John Westbrook pictured damage to car caused by sheer strength of sunRenault Megane was parked in the blistering sunlight in Caorle for daysThe coastal town in northern Italy has been hit by temperatures of 37C By Elaine O'flynn For Mailonline Published: 18:26 GMT, 10 August 2015 | Updated: 19:04 GMT, 10 August 2015 The incredible moment a car melted in the killer heatwave in Italy has been captured on camera by a British tourist. 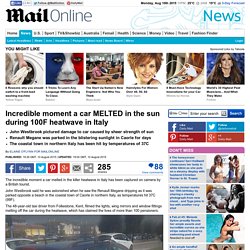 John Westbrook said he was astonished when he saw the Renault Megane dripping as it was parked opposite a beach in the coastal town of Caorle in northern Italy, as temperatures hit 37C (99F). The 48-year-old taxi driver from Folkestone, Kent, filmed the lights, wing mirrors and window fittings melting off the car during the heatwave, which has claimed the lives of more than 100 pensioners. He told MailOnline: 'The car was parked parallel to the beach and had been there for a few days - it was just the pure heat of the sun beating down on it that made it melt.'

Why you should NEVER put your phone number on Facebook. Facebook users may want to think twice before putting a phone number on their profile. The social network encourages anybody who uploads pictures from their mobile to add their number too. But if they do, it means anyone can potentially find their name, picture and location simply by typing this number into the search bar. Underlining the security dangers, a British software engineer has even harvested thousands of data about users, simply by generating random phone numbers.

Footage from inside the creepy Gloriavale cult reveals how elderly leaders match young men and women and use bloodlines to ensure members of the same families do not marry. How patients who believe in God 'cope better' with cancer. US researchers found people with greater faith deal better with cancer Symptoms of the disease affect religious people less, the study suggests Worshippers were also found to have less anxiety, depression and stress By Ollie Gillman for MailOnline Published: 20:07 GMT, 10 August 2015 | Updated: 21:49 GMT, 10 August 2015 Religious people cope better with cancer than those with no faith, a study suggests.

US researchers found that people with greater faith claimed to have better physical health, a greater ability to carry on doing everyday tasks and fewer physical symptoms of cancer and its treatment. People with strong religious beliefs also have less anxiety, depression or distress, the academics believe. Religious people cope better with cancer than those with no faith, a study suggests (file picture) Three French students are arrested for killing a Eva Bourseau then dissolving body in acid. Men, aged 19 to 22, allegedly killed Eva Bourseau at her flat in Toulouse Maths students are accused of trying to dissolve her body in acidOne admits copying 'Breaking Bad' method of disposing of murder victimMother of Miss Bourseau, 24, discovered daughter's decomposing body By Peter Allen In Paris and Ollie Gillman for MailOnline.

Indian boy with giant hands from local gigantism gets life changing operation. Mohammad Kaleem, eight, from India, suffers from localised giantismIt causes his hands and arms to grow to a disproportionate size Villagers believed he was cursed, branding him a 'devil's child'He has now been helped by a local surgeon who has reduced his hands By Sara Malm for MailOnline Published: 12:47 GMT, 10 August 2015 | Updated: 16:50 GMT, 10 August 2015 An eight-year-old boy suffering from a rare form of giantism, which caused his hands to grow disproportionately large, has undergone dramatic surgery to reduce them.

Asian man lets daughter drown in Dubai rather than be touched by 'strange men' Victim, 20, got into difficulty while swimming at the beach with her familyLifeguards tried to help her, but her father got violent and pulled them awayPolice chief: I cannot forget. It shocked me and others involved in the case.