Advice for Jeremy Corbyn. Maybe check anything Kezia Dugdale tells you before you go on telly with it. 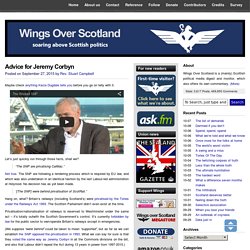 Let’s just quickly run through those facts, shall we? “The SNP are privatising CalMac.” Not true. Photos published of moment Israeli soldier shot Palestinian woman, IDF say it was self-defence. Pictures have emerged of the moment an Israeli soldier aimed his rifle at a woman who was killed by troops in the West Bank. 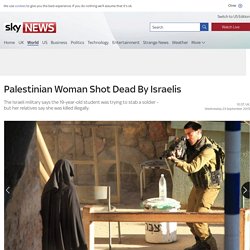 The Israel Defense Forces said the Palestinian was shot in Hebron as she tried to stab a soldier. But relatives of Hadeel al-Hashlamun, a 19-year-old student, denied the Israeli report and claimed she had been illegally killed. What the British are really laughing about - The Leveller. Whether or not it’s true, the Internet has decided for the time being that British Prime Minister David Cameron probably put his private parts into the mouth of a dead pig when he was at Oxford. 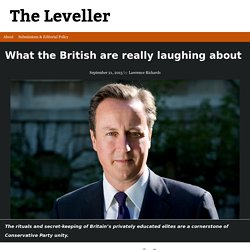 The allegations have been made by extremely well-connected Establishment figures, former Conservative Party Deputy Chairman Lord (Michael) Ashcroft, and former Sunday Times political editor Isabel Oakeshott, and the story is published in the Daily Mail, which makes this the highest possible tier of character assassination in British politics. Ashcroft’s goal is, according to the Mail, “revenge”.

In the years leading up to Cameron taking office in 2010, the tax-dodging billionaire had donated over £8 million to the Conservative Party, bailing them out of debt after their disastrous election defeat in 2005. He had worked as Treasurer and later Deputy Chairman of the party, helping to manage them back to an electable public image under Cameron. That is why we’re laughing. The BBC's refusal to report the dead pig allegations against David Cameron is unacceptable.

The BBC likes to say that, when a really big story breaks, the nation turns to the corporation for its take on the news. 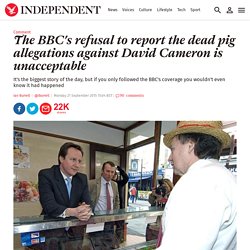 Not now it doesn’t. Not when #piggate has dominated social media all day, not to mention the front page of the Daily Mail, which is serialising Lord Ashcroft’s account of David Cameron’s alleged excesses as an Oxford student. @SophiaPangloss assume you've seen this but just in case... Local Tory group cancels 'pig race' fundraiser after David Cameron pig allegations #piggate. A local Conservative party group has cancelled a planned “pig race” fundraising event after allegations emerged about David Cameron’s experiences with the animals while he was at university. 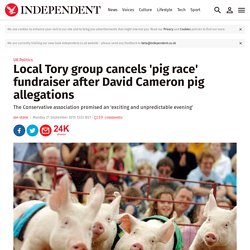 Dewsbury, Mirfield, Denby Dale and Kirkburton Conservative Association in West Yorkshire had planned to charge people to attend the race at a local pub. Kezia Dugdale: Labour MSPs free to back end of UK. Labour MSPs and MPs will be free to campaign for Scottish independence if there is another referendum, party leader Kezia Dugdale has said. 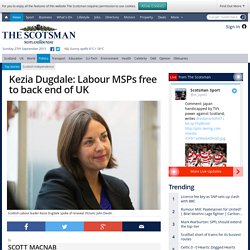 Louise Mensch has somehow defended David Cameron over pig gate. Those waking up on Monday 21 September, threw open the curtains and gazed upon a whole new world. 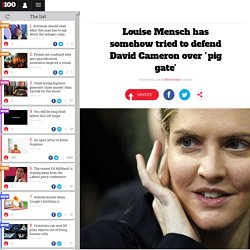 A world in which allegations Prime Minister David Cameron "put a private part of his anatomy" into a dead pig's mouth while at university exist. It's pig gate. It's the bae of pigs. It's David Hameron. Nothing will be the same again. However, the Daily Mail story, serialising a new, unauthorised biography of Cameron, got even more bizarre when former Conservative MP for Corby Louise Mensch weighed into the topic. 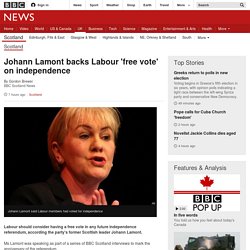 Sherlockian Atlas: Reference: Vermissa Valley. How big will rugby players get? - BBC News. Image copyright AFP This year's Rugby World Cup has been billed by some as a kind of gladiatorial contest - rugby players have always been big, and in recent years they have been getting bigger. 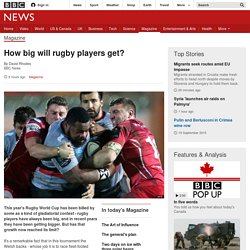 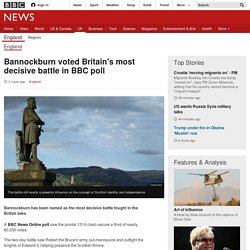 A BBC News Online poll saw the pivotal 1314 clash secure a third of nearly 60,000 votes. The two-day battle saw Robert the Bruce's army out-manoeuvre and outfight the knights of Edward II, helping preserve the Scottish throne. It beat off competition from Hastings and the Battle of Britain, which is marking its 75th anniversary. Scotland's Story- The Proclaimers A great time on the Anniversary with great resonance on Refugees situation! Vote Labour, get Tory. Here's how to sing a national anthem! with thanks to @AlecFinlay. Labour call for VAT to stay in Scotland: The Labour Party is to call for all VAT revenue raised in Scotland to... http:…

Image copyright PA The Labour Party is set to call for all VAT revenue raised in Scotland to be assigned to the Scottish government. The party will table an additional change to the Scotland Bill on further devolution powers on Wednesday. The bill is due to return to the Commons over the coming weeks for further consideration by MPs. Labour said its amendments would give Holyrood the power to design a new welfare system for Scotland. Scottish ministers would be able to top-up welfare benefits, even where individuals have been sanctioned, and create new benefits, it said.

Battles of Britain: Vote for which one changed us most - BBC News. The British Isles have seen countless battles, campaigns and wars. But which one affected us the most? This year is rich with the anniversaries of significant battles - Waterloo, Gallipoli and Agincourt. But during the past 2,000 years, the British Isles has been riven by conflict, being remembered with the 75th anniversary of the Battle of Britain, the recent reburial of Richard III and the upcoming 950th anniversary of Hastings.

So which is the most important battle ever fought here? A clash of arms that produced not only a winner and a loser but perhaps changed everything that came after? Dick Gaughan, spot on again No man has any right to buy and sell The earth for private gain @Lesley… As of seven minutes ago, Germany has begun closing its border with Austria. Germany has reintroduced border controls with Austria, its interior minister has confirmed, halting all trains and deploying 2,100 riot police to help carry out checks.

Speaking at a press conference called at short notice, Thomas de Maizière said the controls were being applied with immediate effect "to bring some order to the entry of refugees". While the exact nature of the checks remained unclear, the minister described them as a "safety measure" which was within the remit of the Schengen Agreement. "In Germany the rules will be applied in order to protect refugees," De Maizière said. "Germany has shown a lot of willingness to help, there have been many helpers and volunteers, but this helpfulness must not be overstretched.

" The Jezzajism and the earthquake that shakes Scotland loose. Jeremy Corbyn has been overwhelmingly elected as leader of the Labour party. Scotland was already skiting along on the ice road to independence, through the cold Tory winter, but Corbyn’s victory puts it on a jet ski. Independence here we come. You might think, if you were a semi-literate Labour MSP, that the Jezzajism of British politics would restore the fortunes of the Labour party in Scotland, and his victory would be the best thing to happen to that sorry branch office since John McTernan said he was flitting to Australia. Sadly, you’d be as mistaken as a McTernan, and that’s pretty mistaken indeed.

Jeremy Corbyn has given hope to thousands of people on the left in England, and in Scotland we must welcome anything that drags Labour out of its hellish cohabitation with neo-conservatism, privatisation, and the creeping criminalisation of protest. Jeremy Corbyn praised by Argentina's president Cristina Kirchner. President Cristina Kirchner said on Saturday that the far-left politican is a great friend of Latin America. "Hope has triumphed," she said. Empire strikes back. Why Scots is a language. Fer whit it's worth... 2 lumps o coal in here, the rest is jist dross... ♫

Second poll finds Scots now back independence. Tory politician suspended over comments about Scotland's First Minister and Islamic State: A SCOTS Tory counci... http:… Hattie jacques. U.K. Labour Frontrunner Corbyn Made 'Tax the Rich' Speech in 1997. Problem loading page. - STV plc. George Osborne mocks Scotland with a sick joke on Trident renewal. To give George Osborne his due, his comic timing is impeccable. It's just an immense pity that his joke is such a sick one.