Citigroup Chief Economist Thinks Only "Helicopter Money" Can Save The World Now. Having recently explained (in great detail) why QE4 (and 5, 6 & 7) were inevitable (despite the protestations of all central planners, except for perhaps Kocharlakota - who never met an economy he didn't want to throw free money at), we found it fascinating that no lessor purveyor of the status quo's view of the world - Citigroup's chief economist Willem Buiter - that a global recession is imminent and nothing but a major blast of fiscal spending financed by outright "helicopter" money from the central banks will avert the deepening crisis. 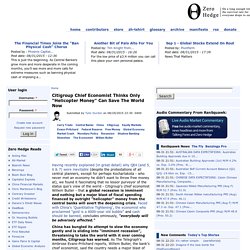 Global currency wars: why China's devaluation is a peace offering misunderstood by the world. But the rest of the world has looked on with trepidation. 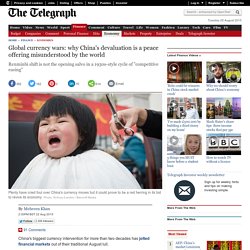 Received wisdom suggests China will now lead the descent into an uncontrolled cycle of "competitive devaluation" where major economies jostle to steal export shares, export deflationary pressures, and pull up their trade barriers. A return to the 1930s? The notion of beggar-thy-neighbour trade wars loom large in the public imagination. In the West, the issue has been given prominence by howls of derision from Washington over the motives of an apparently mercantilist Beijing. "They're doing a big cut in the yuan, and that’s going to be devastating for us. " Donald Trump In 2012, eventual losing Republican party presidential candidate Mitt Romney vowed to declare China a currency manipulator on his first day in office. Following the PBOC's move, a chorus of voices in the US jumped to proclaim the beginning of a fresh round of currency warfare.

Current GOP presidential hopeful Donald Trump was emphatic: "They’re destroying us. A dud tool? Stocks down after China market crash: Why the turmoil is spreading across the globe. Photo by Aly Song/Reuters Friday was a rout in the stock markets; Monday is already looking worse. 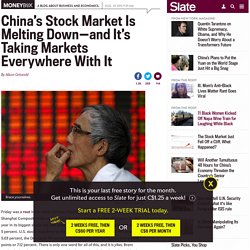 The Shanghai Composite index tumbled 8.5 percent—erasing the last of its gains for the year in its biggest single-day loss since 2007. European stocks have plunged nearly 5 percent. U.S. stocks nosedived at the opening bell: The S&P 500 fell 99.1 points or 5.03 percent, the Dow sank 991 points or 6.02 percent, and the Nasdaq pitched 335 points or 7.12 percent. There is only one word for all of this, and it is yikes. Yahoo Finance. Black Monday for the Markets: China Fails to Hold the Line  People are starting to FREAK OUT! 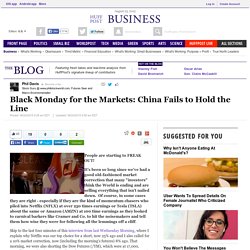 It's been so long since we've had a good old-fashioned market correction that many "investors" think the World is ending and are selling everything that isn't nailed down. Of course, in some cases they are right - especially if they are the kind of momentum chasers who piled into Netflix (NFLX) at over 250 times earnings or Tesla (TSLA) about the same or Amazon (AMZN) at 100 time earnings as they looked to carnival barkers like Cramer and Co. to hit the noisemakers and tell them how wise they were for following all the lemmings off a cliff.

Skip to the last four minutes of this interview from last Wednesday Morning, where I explain why Netflix was our top choice for a short, now 25% ago and I also called for a 10% market correction, now (including the morning's futures) 8% ago. As noted in "Using Futures", there are ALWAYS opportunities to pick up nice gains in the Futures market, no matter which way things are going.

Be careful out there. Have You Hugged a Concrete Pillar Today? The car I drive to work is made of around 2,600 pounds of steel, 800 pounds of plastic, and 400 pounds of light metal alloys. 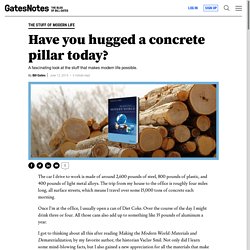 The trip from my house to the office is roughly four miles long, all surface streets, which means I travel over some 15,000 tons of concrete each morning. Once I’m at the office, I usually open a can of Diet Coke. Over the course of the day I might drink three or four. All those cans also add up to something like 35 pounds of aluminum a year. I got to thinking about all this after reading Making the Modern World: Materials and Dematerialization, by my favorite author, the historian Vaclav Smil. This isn’t just idle curiosity. I had already read Smil’s books on energy and diet. Smil excels at answering big questions like these.

Markets should take note: The China tide has turned - The Drum. Opinion Posted It was China that saved Western capitalism from itself in 2009. 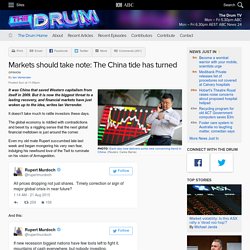 But it is now the biggest threat to a lasting recovery, and financial markets have just woken up to the idea, writes Ian Verrender. It doesn't take much to rattle investors these days. World stock markets plunge after fall of China shares; US dollar takes hit before stabilising. Updated World stock markets have plunged following a near 9 per cent dive in China shares, but commodities and the dollar pared losses and United States stocks staged a striking comeback in a volatile session after European markets closed. 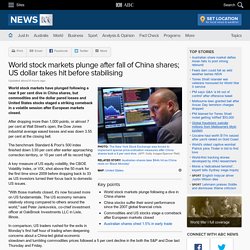 Key points World stock markets plunge following a dive in China sharesChina stocks suffer their worst performance since the 2007 global financial crisisCommodities and US stocks stage a comeback after European markets closedAustralian shares shed 1.5% in early trade After dropping more than 1,000 points, or almost 7 per cent at Wall Street's open, the Dow Jones industrial average eased losses and was down 3.55 per cent at the closing bell. 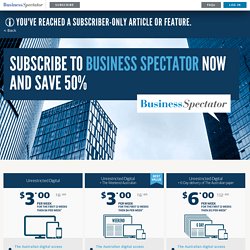 Renewals occur unless cancelled. Payments in advance by credit/debit card or Paypal only. Offer is only available where normal home delivery exists and not where additional freight is ordinarily charged. Explicit cookie consent.