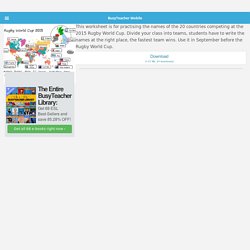 Divide your class into teams, students have to write the names at the right place, the fastest team wins. BusyTeacher.org Mobile. This is my second worksheet about the Rugby World Cup. 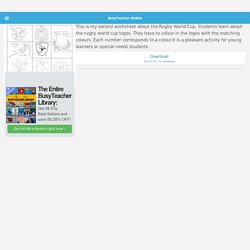 Students learn about the rugby world cup logos. They have to colour in the logos with the matching colours. Each number corresponds to a colour.It is a pleasant activity for young learners or special needs students. BusyTeacher.org Mobile. This is a crossword puzzle about rugby (answer key included). 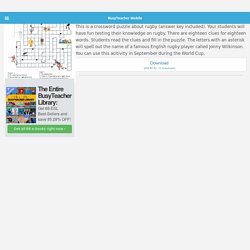 Your students will have fun testing their knowledge on rugby. There are eighteen clues for eighteen words. Students read the clues and fill in the puzzle. The letters with an asterisk will spell out the name of a famous English rugby player called Jonny Wilkinson. You can use this acitivity in September during the World Cup. Rugby Comes Home. Although teams from the Southern Hemisphere have long dominated the sport, rugby was invented in England. 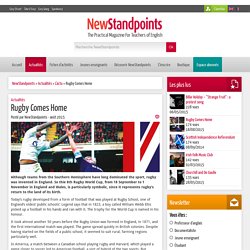 So thie 8th Rugby World Cup, from 18 September to 1 November in England and Wales, is particularly symbolic, since it represents rugby’s return to the land of its birth. Today’s rugby developed from a form of football that was played at Rugby School, one of England’s oldest ‘public schools’. Legend says that in 1823, a boy called William Webb Ellis picked up a football in his hands and ran with it.

The trophy for the World Cup is named in his honour. It took almost another 50 years before the Rugby Union was formed in England, in 1871, and the first international match was played. In America, a match between a Canadian school playing rugby and Harvard, which played a game closer to soccer led to American football, a sort of hybrid of the two sports. After winning at home in 2011, New Zealand would love to become the first country to win two consecutive Rugby World Cups.

A History of Rugby Football. New for 2015 Rugby World Cup Tours - at the birthplace of the game In 1820 the game of Rugby was played rather like soccer, but players were allowed to catch the ball and kick it out of their hands. 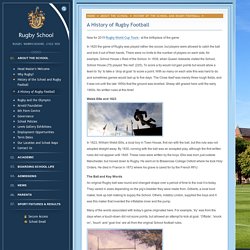 There were no limits to the number of players on each side, for example, School House v Rest of the School. In 1839, when Queen Adelaide visited the School, School House (75) played ‘the rest’ (225). To score a try would not gain points but would allow a team to ‘try’ to take a ‘drop at goal’ to score a point. With so many on each side this was hard to do and sometimes games would last up to five days. Webb Ellis and 1823 In 1823, William Webb Ellis, a local boy in Town House, first ran with the ball, but this rule was not adopted straight away. The Ball and Key Words An original Rugby ball was round and changed shape over a period of time to the oval it is today. Many of the words associated with today’s game originated here. Rugby World Cup. Rugby World Cup For Kids.

The Web Ellis Cup What does the winning team take home? 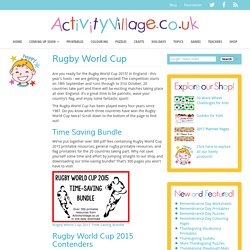 The Web Ellis Cup! (photo courtesy of flickr.com/jonlucas/) The cup is named after William Web Ellis, the 16 year old schoolboy from England's Rugby School, who supposedly invented rugby during a football training session in 1823, when he picked up the ball and ran with it! It's not quite as grand as the Web Ellis Cup, but we have our own gold sports trophy which you can embellish. Rugby Colouring Pages We've got a huge collection of rugby colouring page featuring men, boys and girls. How to Play Rugby - Part 4. Learn how to play rugby. 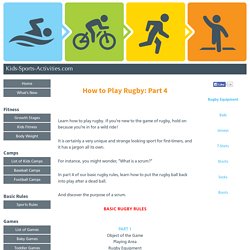 If you're new to the game of rugby, hold on because you're in for a wild ride! It is certainly a very unique and strange looking sport for first-timers, and it has a jargon all its own. Rugby World Cup 2015: Team guides for all 20 of the countries competing for the Webb Ellis Cup in England. Rugby World Cup. 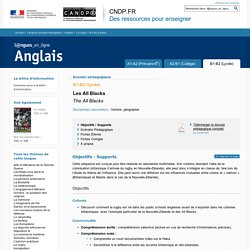