Fiction / YA. Sci-fi. Horror / dystopia. Life-changing? Science. Funny. 10 Naughty Books That'll Make You Want to Have Sex. 50 Best Sociology Books of All Time - Masters Degree. Many students find themselves compelled to learn more about the social sciences because of their broad, interdisciplinary nature. 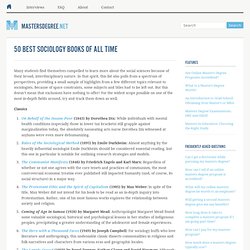 In that spirit, this list also pulls from a spectrum of perspectives, providing a small sample of highlights from a few different topics relevant to sociologists. Because of space constraints, some subjects and titles had to be left out. But this doesn’t mean that exclusions have nothing to offer! For the widest scope possible on one of the most in-depth fields around, try and track them down as well. Classics. 55 great books under 200 pages. Having no time doesn’t mean you have to stop reading. 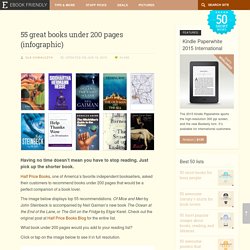 Just pick up the shorter book. Half Price Books, one of America’s favorite independent booksellers, asked their customers to recommend books under 200 pages that would be a perfect companion of a book lover. The image below displays top 55 recommendations. Of Mice and Men by John Steinbeck is accompanied by Neil Gaiman’s new book The Ocean at the End of the Lane, or The Girl on the Fridge by Etgar Keret. Check out the original post at Half Price Books Blog for the entire list.

What book under 200 pages would you add to your reading list? Click or tap on the image below to see it in full resolution. Top article Best short books you can read in less than three hours. More infographics to check out: About Ola Kowalczyk Collecting bits and pieces about books and libraries in digital age. How to be Well-read in No Time: 40 Short Novels - Listmuse.com. 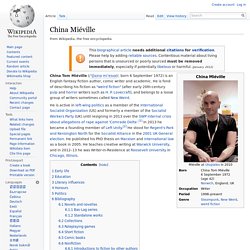 He is fond of describing his fiction as "weird fiction" (after early 20th-century pulp and horror writers such as H. P. Lovecraft), and belongs to a loose group of writers sometimes called New Weird. Early life[edit] Don DeLillo. DeLillo has described his fiction as being concerned with "living in dangerous times",[3] and in a 2005 interview declared, "Writers must oppose systems. 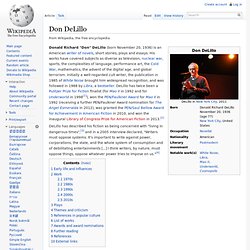 It's important to write against power, corporations, the state, and the whole system of consumption and of debilitating entertainments [...] I think writers, by nature, must oppose things, oppose whatever power tries to impose on us. "[4] Early life and Influences[edit] DeLillo was born on November 20, 1936 and grew up in a working-class Italian Catholic family, from Molise, in an Italian-American neighborhood of the Bronx in New York City, not far from Arthur Avenue.[5] Reflecting on his childhood in The Bronx, DeLillo later described how he was "...always out in the street.

As a teenager, DeLillo wasn't interested in writing until taking a summer job as a parking attendant, where hours spent waiting and watching over vehicles led to a reading habit. Work[edit] The Black Company. Cover of the first novel in the series, "The Black Company". 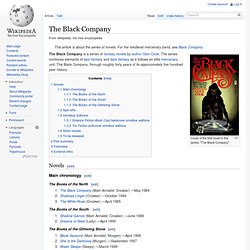 The Black Company is a series of fantasy novels by author Glen Cook. The series combines elements of epic fantasy and dark fantasy as it follows an elite mercenary unit, The Black Company, through roughly forty years of its approximately five hundred year history. Novels[edit] Main chronology[edit] The Steel Remains. The Steel Remains (2008) is a fantasy novel by Richard K. Morgan. It is the first fantasy book by Morgan, a noted science fiction author known for the Takeshi Kovacs trilogy and the standalone novels Market Forces and Black Man. The Steel Remains is the first book of a planned trilogy named A Land Fit For Heroes, a series title also used by Phillip Mann.

A Land Fit For Heroes was originally the working title of the first volume, and was retained as the series title after first Morgan and the UK publisher, and then the US publisher, decided to use the current title The Steel Remains.[1] The sequel, The Cold Commands, was published in 2011. The third, The Dark Defiles is due in August 2013. Plot[edit]