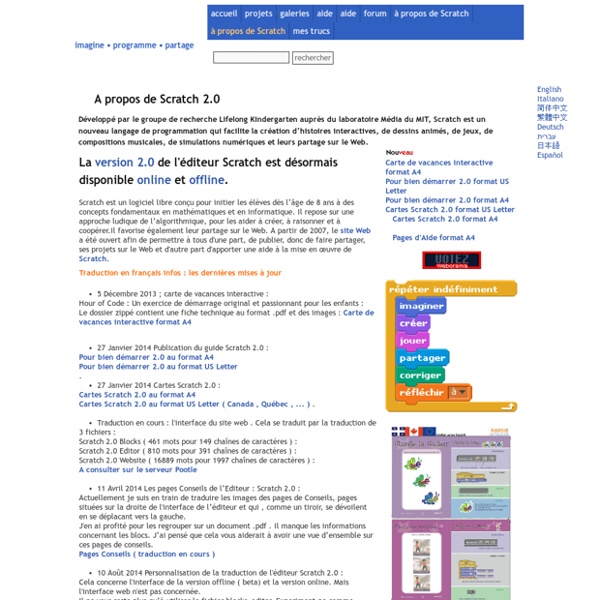 Scratch Developed by the Lifelong Kindergarten with the MIT's Media Lab research group, Scratch is a new programming language that facilitates the creation of interactive, cartoons, games, musical compositions of stories, simulations and their shares on the Web. Scratch is a free software designed to introduce students from the age of 8, to fundamental concepts in mathematics and computer science. It is based on a fun of algorithmic approach, to help them to create, to reason and to cooperate. It also promotes the sharing on the Web. From 2007, the website was opened to allow everyone on the one hand to publish, so sharing its projects on the Web, and on the other hand to provide assistance to the implementation of Scratch.

Resources Anyone can use Kodu! Kodu can be taught by any teacher, no previous programming expertise required. Ages 8 and up typically have the most success learning Kodu. Blockly for PICAXE - Software Product Details Blockly for PICAXE is a free powerful visual programming tool for generating PICAXE microcontroller programs. By stacking coloured blocks on top of each other a control program can be rapidly generated. This simple click’n’drag programming method allows students to rapidly develop control sequences for real life microcontroller projects. Blockly can be run online in a web browser on almost any device that has an internet connection. For offline use Blockly is embedded within PICAXE Editor and is also available as a standalone (installed) Chrome app.

MaKey MaKey PicoBoard Scratch Trumpet I have been programming an electronic trumpet in Scratch. I am using a MaKey MaKey and a PicoBoardfor the hardware side of this project. Here is the Scratch code I devised. You can download the project from my Scratch projects page. Timeline Timeline allows students to create a graphical representation of an event or process by displaying items sequentially along a line. Timelines can be organized by time of day, date, or event, and the tool allows users to create a label with short or long descriptive text. Adding an image for each label makes a timeline more visually appealing.

12 Sites and Apps for Learning to Code When the conversation amongst educators turns to programming, Scratch is often the first resource that is mentioned. Scratch allows students to program animations, games, and videos through a visual interface. Students create their programs by dragging together blocks that represent movements and functions on their screens. The blocks snap together to help students see how the "if, then" logic of programming works. The Internet map The map of the Internet Like any other map, The Internet map is a scheme displaying objects’ relative position; but unlike real maps (e.g. the map of the Earth) or virtual maps (e.g. the map of Mordor), the objects shown on it are not aligned on a surface. Mathematically speaking, The Internet map is a bi-dimensional presentation of links between websites on the Internet.

Anyone Can Learn to Program with Scratch One of the most powerful things about the Leap Motion platform is its ability to tie into just about any creative platform. That’s why we’ve launched a Platform Integrations & Libraries showcase where you can discover the latest wrappers, plugins, and integrations. Whether you started programming at four years old, or yesterday afternoon, there’s nothing like that first time when something you coded springs to life and says “Hello World!”

mollysoda.tumblr.com (Source: unomoralez, via whatsurdadlike) artwerk6666: bebe (Source: hugostrange, via andrewilliam) Nuages de mots TAGUL Word Cloud Art Gallery New Trending Most loved sunset By swalta 46 minutes ago Informática Europe Code Week 360° virtual tour creation with CoSpaces_Edu The objective of this lesson plan is to create different Virtual Reality brochures or touristic guides in which students show their knowledge of their community, their city, a culture, or a civilization. This lesson involves getting students to do a significant amount of research and data collection, organize the information they gathered, and decide how to best present it in narrated or written format.CoSpaces Edu allows students to use 360° degree images onto which complementary information can be added through different types of icons or shapes available on the web or on the platform itself.The use of this type of visuals and the creation of 360° walks or itineraries is absolutely fantastic for class. It offers a way of bringing students closer to distant or nearby places and offering them a full view of the place. Types: Levels: