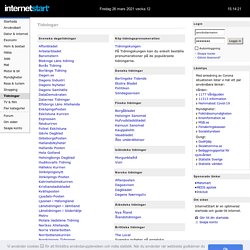 När du använder vår webbsida godkänner du det. Läs mer. Your Digital Archive. KidsPost. The South Korean teens so addicted to phones they're going into detox. The South Korean high school student knew she had a problem, so she enrolled in a government-run camp for teenagers who can't put their phones down. 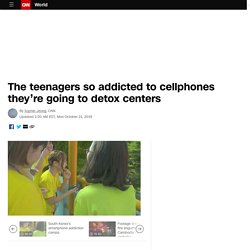 "Even when I knew in my head I should stop using my smartphone, I just kept going," Yoo said. "I couldn't stop, so I'd be on it until dawn. " Last year, around 30% of South Korean children aged 10 to 19 were classed as "overdependent" on their phones, according to the Ministry of Science and Information and Communications Technology (MSIT). That means they experienced "serious consequences" due to their smartphone use, including a decline in self-control. It's those children -- like Yoo -- who qualify for a place on government-run camps to treat internet addiction. This year, the Ministry of Gender Equality and Family held 16 camps across the country for about 400 middle and high school students. Sleepless and scrolling Yoo had been an average student in middle school, but by high school she had sunk to the bottom of the class. 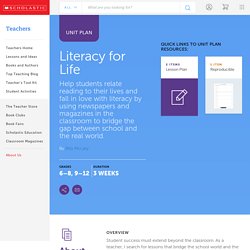 As a teacher, I search for lessons that bridge the school world and the world outside of school. The alarming news of students' lack of reading for pleasure prompts teachers of all levels to help students relate reading to their lives and fall in love with literacy. Using newspapers and magazines in the classroom entices students to build a lifelong reading habit. Teaching students to recognize bias in journalistic-style writing will help to create informed citizens. Objectives. UK Newspapers Online and Worldwide Newspapers in English;International News Sites/Links; Business News. Youngzine. DOGO News - Kids news articles! Kids current events; plus kids news on science, sports, and more! Home - CBBC Newsround. Latest Stories. NewsHour Extra. Articles for kids, middle school, teens from Smithsonian.

The Times in Plain English. Something About Which We All Agree: Clutter is the Enemy Teenager's bedroom with clothes, books, and CDs thrown around. 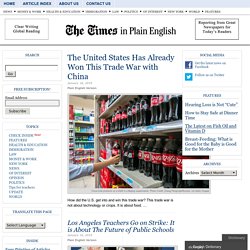 There is something about piles of clothing and other household goods. When closets, drawers, and shelves are overflowing, people use the dreaded word: clutter. Clutter, it turns out, is not a … Ukraine and Russia: The Religious Side of the War The head of the independent Ukrainian Orthodox Church, performed a blessing in Istanbul on Sunday.PhotoCredit: Lefteris Pitarakis/Associated Press Religion The center of all Eastern Orthodox Christians is in Istanbul, Turkey. It is Not Just People, Caravans of Money Migrate A commuter train in Istanbul passed an election poster for President Recep Tayyip Erdogan last June. Most migrations are about staying alive. Hello, how are your wages on the first workday of 2019? Map of wages in the United States Today, hundreds of thousands of federal workers in the United States have no wages. A Frenchman is Crossing the Atlantic in a Barrel.

What’s Going On in This Picture? - The New York Times. Unfiltered.news. Easy English Articles - The School Times International. Current events articles for teachers and students. Yes, you can learn English. - Simple English News. Easy News for ESL Listening. Teaching Kids News - Readable, teachable news. One in five young people has suffered online abuse, study finds. Cyberbullying is a worse problem among teenagers than drug abuse, according to almost half of all young people surveyed in a new study that finds one in five has experienced online abuse. 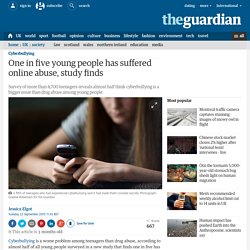 In the global YouGov survey of more than 4,700 teenagers from across the world, a fifth of those who had experienced cyberbullying said it had made them consider suicide, and more than half said being taunted online was worse than being bullied in person. A quarter of those bullied closed down social media accounts and more than a fifth skipped school, the survey commissioned by Vodafone found. Of those who were bullied, almost 40% did not tell their parents, citing feelings of shame or fear. 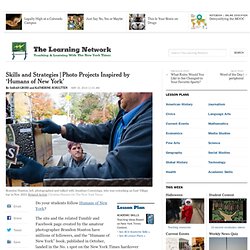 The site and the related Tumblr and Facebook page created by the amateur photographer Brandon Stanton have millions of followers, and the “Humans of New York” book, published in October, landed in the No. 1 spot on the New York Times hardcover nonfiction best-seller list its first week on sale. As the Times article about the phenomenon puts it: Mr. Stanton — a hybrid of interviewer, photographer and eager chronicler of street life — said this week that he was still stunned by the runaway success of his book, which has more than 145,000 copies in print. In this lesson, students read the article, analyze some of Mr. Your Task: Read an article about Humans of New York and analyze photos from the project. Read “A Fisherman in New York’s Sea of Faces.”

Before You Do the Task You Might … Use the three questions The Learning Network uses for its photo analysis feature: What’s going on in this picture? English news and easy articles for students of English. News For Your Classroom.