A timelapse of the Sun in 4K 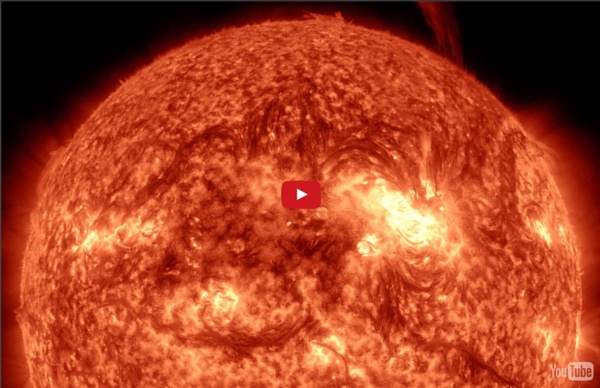 beyonce CHIME FOR CHANGE and Global Citizen are proud to announce a long-term partnership to build a global campaign that will create change for girls and women around the world. Global Citizen’s community of people wants to learn about the critical issues facing women, and to take action in support of them. Gender equality is fundamental to Global Citizen’s long-term objective of ending extreme poverty by 2030. Women account for half of the world’s population, but three-fifths of those in extreme poverty. Women also perform two-thirds of the world’s working hours, yet earn only ten per cent of the world’s income, and own less than one per cent of the world’s property. This partnership will provide CHIME FOR CHANGE a global platform – GlobalCitizen.org – to engage millions of people around the world by educating and encouraging them to take meaningful action in support of girls and women.

The Neuroscience of Singing The neuroscience of singing shows that when we sing our neurotransmitters connect in new and different ways. It fires up the right temporal lobe of our brain, releasing endorphins that make us smarter, healthier, happier and more creative. When we sing with other people this effect is amplified. The science is in. Singing is really, really good for you and the most recent research suggests that group singing is the most exhilarating and transformative of all. The good feelings we get from singing in a group are a kind of evolutionary reward for coming together cooperatively.

This photo shows the Sun's power in exquisite detail From 93 million miles away, we earthlings are blissfully unaware of the sheer magnitude of powerful activity roiling on the the sun’s surface. But thanks to NASA’s Solar Dynamics Observatory (SDO) spacecraft, which has been snapping pictures of the sun for the last five years, we can see this massive monster in action, like in the SDO image below: What you’re seeing is a representation of Introducing the newest member of our family, the YouTube Kids app Like most parents, I love helping my kids learn more about something they're interested in. For example, right now, I spend a lot of time on YouTube with my 3-year-old son, who loves watching videos of car washes, Super Simple Songs, and about the universe. We’re not the only ones: Families worldwide are watching millions of videos on YouTube. And lately, those of us at YouTube have been working on a new way for our kids—and yours—to discover and explore videos on every topic in, well, the universe. Today, we’re introducing the YouTube Kids app, the first Google product built from the ground up with little ones in mind. The app makes it safer and easier for children to find videos on topics they want to explore, and is available for free on Google Play and the App Store in the U.S.

The Relation Between the Moon and the Human Mind ~ Fractal Enlightenment Every thing around us has an effect on something within us – be it our exposure to the sun’s ultraviolet radiation (UVR), looking at the morning sky, taking a walk in the forest, or swimming in the sea – nature’s beauty prompts the flow of hormones and energy in our body. But not everything that’s present in nature is fundamentally good for human beings. The Moon, romanticised by poets and artists since ages, has a series of negative effects on the human mind, scientifically and spiritually. Several scientists and research institutions have conducted experiments over the years to study the effect of moon and full moon nights on the human mind and behaviour. Moon, Conscious and Sub-Conscious According to Quantum Physics, everything in the Universe – stars, planets, satellites or even the moon has an operating frequency.

“Tim and Eric” directed this lightbulb ad for GE, starring Jeff Goldblum, and it's awesome This commercial for GE Link Light Bulbs starring Jeff Goldblum was directed by Tim Heidecker and Eric Wareheim, bizarro-discomfort comedy performers and directors best known for the Cartoon Network Adult Swim programs “Tim and Eric Awesome Show, Great Job!,” “Check it Out With Dr. Steve Brule,” and “Tom Goes to the Mayor.” Tim and Eric and Dr. Steve Brule are currently on a sold-out US tour. Ten Principles for the Establishment of a Monolithic Ideological System - Wikipedia Ten Principles for the Establishment of a Monolithic Ideological System (Chosŏn'gŭl: 당의 유일사상체계확립의 10대 원칙; also known as the "Ten Principles of the One-Ideology System") are a set of ten principles and 65 clauses which establishes standards for governance and guides the behaviors of the people of North Korea.[1] Originally proposed by Kim Yong-ju, the younger brother of North Korean leader Kim Il-sung, in 1967 and made official by Kim Jong-il in 1974, the Monolithic Ideological System emerged in the context of internal policy debates within the Workers’ Party of Korea and the external challenges posed by the Sino-Soviet split. The Monolithic Ideological System was implemented by Kim Il-sung in order to squash internal dissent and cement his family's dominance over the North Korean political system.[2] The Ten Principles have come to supersede the national constitution or edicts by the Workers’ Party of Korea, and in practice serve as the supreme law of the country.[3][4][5] See also[edit]

Alan Friedman’s Astonishing HD Photographs of the Sun Shot from his Own Backyard Alan Friedman is a fascinating guy. By day he’s a maker of greeting cards and a lover of hats, but in his spare time he’s a self-proclaimed space cowboy who points a telescope skyward from his backyard in downtown Buffalo, directly into the light of the sun. Using special filters attached to his camera Friedman captures some of the most lovely details of the Sun’s roiling surface.

How journalists use Twitter I've tweeted three times in the last 12 days. Three. Yet I'm on Twitter constantly. An Alternate Universe: Our Cosmos May Have Been Spawned by a Hypermassive Black Hole With Origins From a Singularity The most accepted theory of the origin of the universe is still the Big Bang. The theory proposes the universe started from a small singularity (the gravitational kind), then began to expand over the succeeding 13.8 billion years. Although this expansion has its own issues, a bigger question remains: what preceded the Big Bang? Ethan Siegel, physicist and contributor at Forbes, explains the possibility that the universe could have started from a black hole.

The Sun Is Slowly Expanding. How Can We Stop It From Killing Us All? The Earth’s future seems to always be at stake, whether it’s climate change, country politics, or even the expansion of our sun. While the other threats seem a bit exaggerated and current, the aging of our sun into a red giant in 7.6 billion years is a legitimate threat the existence of life on Earth — as well as the Earth itself. While some scientists contend that the expansion of the Sun results in its loss of mass, and thereby the gravitational tug on the Earth should lessen, others disagree with this prediction.