Biomes of the World - Biome Map 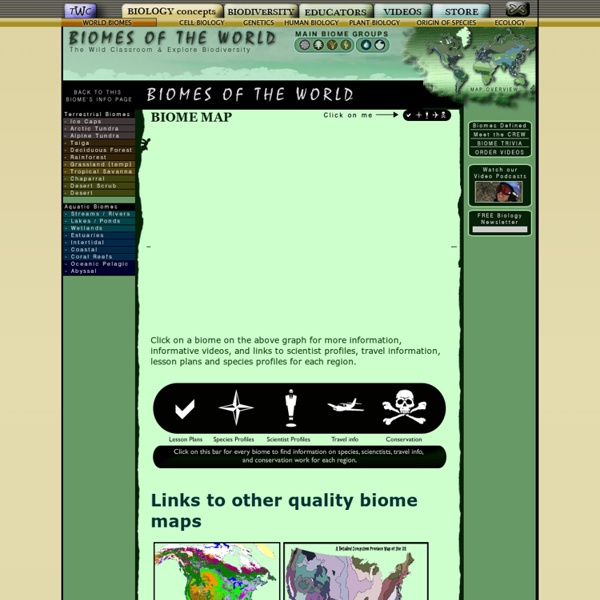 Click on a biome on the above graph for more information, informative videos, and links to scientist profiles, travel information, lesson plans and species profiles for each region. We'd like to know where you're coming from. If you've used this site for a class project or browsing for fun, add yourself to our map and communicate with other "ecogeeks" Related:  Ecology

KILL 'EM ALL They buzz. They bite. And they have killed more people than cancer, war, or heart disease. Ever since there have been humans, mosquitoes have been biting us, and we’ve been trying to kill them. Oh, and we visit a mosquito factory in eastern Brazil. And after listening, read this, from Radiolab producer Andy Mills: what if we don't kill 'em all? Special thanks to reporter David Baker The Population Biology of Isle Royale Wolves and Moose: An Overview | The Wolves and Moose of Isle Royale 1. Five decades of wolf-moose dynamics The wolves and moose of Isle Royale have been studied for more than five decades. The most important events in the chronology have been essentially unpredictable. 2. Each symbol on this graph represents the density of moose (read from the horizontal axis) and the density of wolves (read from the vertical axis) for a particular year. Wolf and moose densities are the total number of wolves and moose on Isle Royale, divided by the size of Isle Royale, 544km2. This graph tells a great deal about how wolf and moose populations are interconnected. By contrast, if moose abundance was determined primarily by wolf predation, and if wolf abundance was a good indication of predation pressure, then wolf and moose abundance would be negatively related. This graph shows that wolf and moose abundances are neither positively nor negatively related. 3. The most remarkable observation is just how variable kill rate is. 4. 5. 6. So how is it on Isle Royale? 7. 8. 9.

WolfQuest Using the Carbon Cycle Interactive Game in the Classroom - Windows to the Universe Have students read the Windows to the Universe page entitled The Carbon Cycle. Introduction: Ask students to (based of the reading) list the places where carbon is found on Earth. As a class, brainstorm why carbon is important and why carbon is sometimes hazardous. Tell students that for this online interactive game, they are all playing the role of carbon atoms. They will travel through the carbon cycle. Students write a paragraph about their trip through the carbon cycle. Carbon is the 12th element in the periodic table. The carbon cycle is one of the biogeochemical cycles. The six locations along the online game board "map" (atmosphere, plants, soils, shallow ocean, deep ocean, and marine life) are called carbon reservoirs or carbon pools. In this interactive game, students assume the identify of carbon atoms that are released into the atmosphere when fossil fuels are burned.

Energy Flow Through Ecosystems Summary:The objective of this lesson plan is to give students a basic understanding of how energy flows through an ecosystem by introducing them to the concepts of food chains and energy pyramids. Included in this lesson are two small group activities and a power point presentation. The power point presentation provides the students with fundamental knowledge about one way that organisms in an ecosystem interact and depend on one another. By using the power point lecture, the students are able to visualize food chains and energy pyramids. It is hoped that through the small group activities, the students will help each other gain a better understanding of how energy flows through an ecosystem. Main Curriculum Tie: Science - BiologyStandard 1 Objective 1Summarize how energy flows through an ecosystem. Materials: LCD projector and classroom computer 1 computer for every 2 students Graph paper Microsoft PowerPoint Internet Access on each computer Student Prior Knowledge: Intended Learning Outcomes: