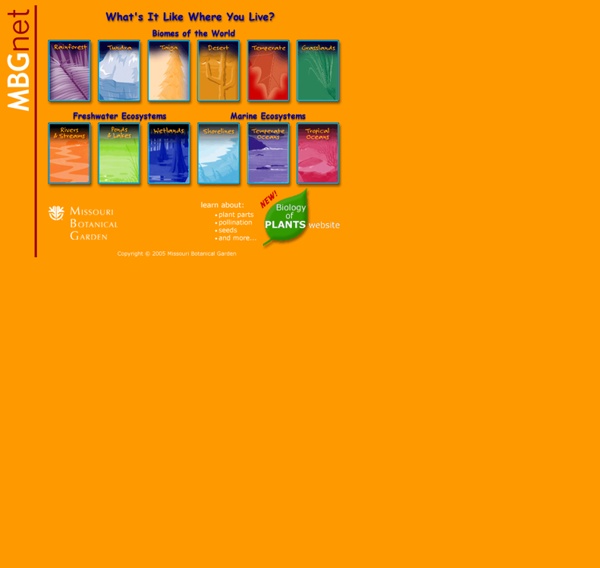 Blue Planet Biomes - Home instaGrok.com biome The Land we Love || Agriculture: What's 'organic'? In recent years we've heard a lot about organic farming and organic food. But what exactly does “organic” mean? Organic farming encourages the sustainable health and productivity of the ecosystem (soil, plants, animals and people). Organic foods are grown (e.g. plants) and raised (e.g. livestock) using absolutely no synthetic (made by people) pesticides or fertilizers, hormones or genetically modified organisms (GMOs) on land that has been chemical-free for at least three years. Organically-grown food may not always look as “picture perfect” as food grown with chemicals, and may not be as cheap, but it generally tastes better and more importantly, it's healthier for you and the environment.

World Biomes and Ecosystems What is an ecosystem? Each individual plant and animal could not exist by itself on planet Earth. All living organisms need millions of other living organisms to survive. An ecosystem describes a specific area where the organisms work together as a unit. What is a biome? A biome is way to describe a large group of similar ecosystems. Map of the world biomes - Click on the map to see a larger picture Click on the biomes below to learn more about each one. Land Biomes Aquatic BiomesThe Balance of the Ecosystem Ecosystems maintain important balances in order that all the organisms within the ecosystem can survive. The sun provides the energy needed by ecosystems. Some important cycles that occur in ecosystems to help maintain proper balance include: Humans and the Ecosystem Humans have adversely affected many ecosystems and biomes throughout the world. How can we help? By learning about the world's biomes and how important they are to life, you can spread the word. Activities

Canada's Endangered Species 256 Canadian species are listed by the Scientific Committee on the Status of Endangered Wildlife in Canada (COSEWIC) as being extinct, extirpated, endangered, threatened and vulnerable. The list only includes Canada's vertebrate and vascular plant species and was released in April 1994. Definitions are: Extinct - a species formerly indigenous to Canada that no longer exists anywhere. Extirpated - a species no longer existing in the wild in Canada but occurring elsewhere in the world. Endangered - a species threatened with imminent extinction or extirpation throughout all or a significant portion of its Canadian range. Threatened - a species likely to become endangered in Canada if the factors affecting its vulnerability are not reversed. Vulnerable - a species particularly at risk because of low or declining numbers, small range or for some other reason, but not a threatened species. Extinct - 9 species Mammals, 2; Birds, 3; Fish, 4 Extirpated - 11 species Endangered - 55 species Plants, 30;

The world's biomes Online exhibits The world's biomes Biomes are defined as "the world's major communities, classified according to the predominant vegetation and characterized by adaptations of organisms to that particular environment" (Campbell 1996). The importance of biomes cannot be overestimated. Biomes have changed and moved many times during the history of life on Earth. More recently, human activities have drastically altered these communities. Here we group biomes into six major types: Conservation and preservation of biomes Because we share the world with many other species of plants and animals, we must consider the consequences of our actions. Forests are important as they are home to the most diverse biotic communties in the world. Logging has depleted many old-growth temperate forests. Tropical forests have fallen victim to timber exploitation, slash and burn farming, and clearfelling for industrial use or cattle ranching, particularly in Latin America.

Research Tools The world's biomes Biomes A biome is a large, distinctive complex of plant communities created and maintained by climate. How many biomes are there? A study published in 1999 concluded that there are 150 different "ecoregions" in North America alone. But I shall cast my lot with the "lumpers" rather than the "splitters" and lump these into 8 biomes: The figure shows the distribution of these 8 biomes around the world. A number of climatic factors interact in the creation and maintenance of a biome. whether it ever freezes; length of the growing season If there is ample rainfall, we find 4 characteristic biomes as we proceed from the tropics (high temperatures) to the extreme latitudes (low temperatures). Tropical Rain Forest In the Western Hemisphere, the tropical rain forest reaches its fullest development in the jungles of Central and South America. The tropical rain forest exceeds all the other biomes in the diversity of its animals as well as plants. Temperate Deciduous Forest Taiga The photo (courtesy of Dr.