Tax haven link to rainforest destruction and illegal fishing. Image copyright Getty Images Deforestation in the Amazon and widespread illegal fishing have both been linked to tax havens, according to a new study. 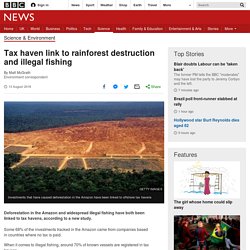 Some 68% of the investments tracked in the Amazon came from companies based in countries where no tax is paid. When it comes to illegal fishing, around 70% of known vessels are registered in tax havens. Scientists claim pesticides are linked to bee decline. Climate 'key driver' in European forest disturbances. 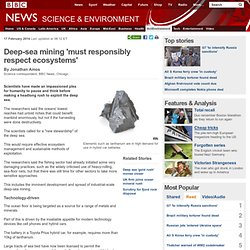 Nations adopt landmark mercury pollution convention. 10 October 2013Last updated at 05:56 ET By Mark Kinver Environment reporter, BBC News Rising gold prices has seen an increase in small-scale gold mines, most of which use mercury Nations have begun signing a legally binding treaty designed to curb mercury pollution and the use of the toxic metal in products around the globe. 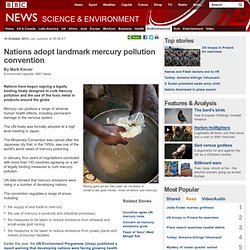 Mercury can produce a range of adverse human health effects, including permanent damage to the nervous system. The UN treaty was formally adopted at a high level meeting in Japan. The Minamata Convention was named after the Japanese city that, in the 1950s, saw one of the world's worst cases of mercury poisoning. In January, four years of negotiations concluded with more than 140 countries agreeing on a set of legally binding measures to curb mercury pollution. Can we restore the world’s coral reefs? 21 August 2013Last updated at 09:23 GMT Even the Great Barrier Reef is having to face up to the challenge of a changing world Advances in science could offer hope for the world's besieged coral reefs. 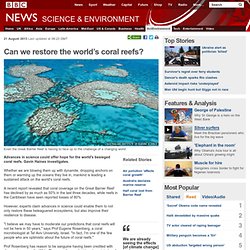 Gavin Haines investigates. Whether we are blowing them up with dynamite, dropping anchors on them or warming up the oceans they live in, mankind is leading a sustained attack on the world's coral reefs. A recent report revealed that coral coverage on the Great Barrier Reef has declined by as much as 50% in the last three decades, while reefs in the Caribbean have seen reported losses of 80%. However, experts claim advances in science could enable them to not only restore these beleaguered ecosystems, but also improve their resilience to disease. Fracking: RSPB objects to Cuadrilla plans for two sites.

17 August 2013Last updated at 01:58 ET By Roger Harrabin Environment analyst Singleton is an important site for whooper swans The RSPB has lodged objections to proposals to drill for shale gas and oil in Lancashire and West Sussex. 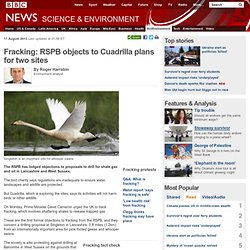 The bird charity says regulations are inadequate to ensure water, landscapes and wildlife are protected. But Cuadrilla, which is exploring the sites, says its activities will not harm birds or other wildlife. On Monday, Prime Minister David Cameron urged the UK to back fracking, which involves shattering shales to release trapped gas. These are the first formal objections to fracking from the RSPB, and they concern a drilling proposal at Singleton in Lancashire, 0.8 miles (1.2km) from an internationally important area for pink-footed geese and whooper swans. Big animal extinction 'severed nutrient arteries' 12 August 2013Last updated at 02:01 ET By Mark Kinver Environment reporter, BBC News The study is the first to look at how prehistoric megafauna distributed nutrients The demise of big animals in the Amazon region 12,000 years ago cut a key way that nutrients were distributed across the landscape, a study has suggested. 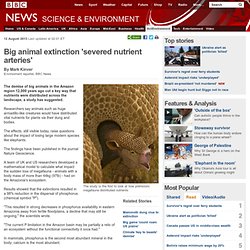 Researchers say animals such as huge armadillo-like creatures would have distributed vital nutrients for plants via their dung and bodies. The effects, still visible today, raise questions about the impact of losing large modern species like elephants. Toxic Derbyshire 'Blue Lagoon' dyed black. 10 June 2013Last updated at 13:35 ET Continue reading the main story Despite warning signs, dozens of swimmers flock to the "beauty spot" Residents say the change to black seems to be putting people off Although the lagoon looked picturesque, the water has a pH level of 11.3 Continue reading the main story. 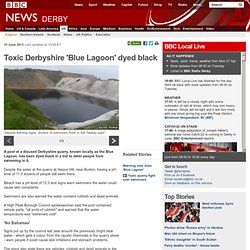 Arctic drilling: UK 'complacent', say MPs. 26 July 2013Last updated at 22:11 ET The MPs have renewed their calls for an Arctic environmental sanctuary The UK is "complacently standing by" as firms start drilling for oil and gas in the Arctic, a group of MPs has said. 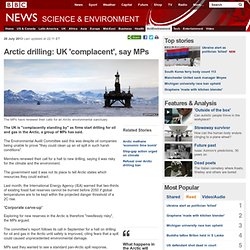 The Environmental Audit Committee said this was despite oil companies being unable to prove "they could clean up an oil spill in such harsh conditions". Members renewed their call for a halt to new drilling, saying it was risky for the climate and the environment. The government said it was not its place to tell Arctic states which resources they could extract. Last month, the International Energy Agency (IEA) warned that two-thirds of existing fossil fuel reserves cannot be burned before 2050 if global temperatures are to be kept within the projected danger threshold of a 2C rise. The Aral Sea Crisis. Desert 'carbon farming' to curb CO2. 1 August 2013Last updated at 10:45 ET By Matt McGrath Environment correspondent, BBC News Jatropha seeds can be used to produce biofuel but the plant itself can absorb large amounts of CO2 Scientists say that planting large numbers of jatropha trees in desert areas could be an effective way of curbing emissions of CO2. 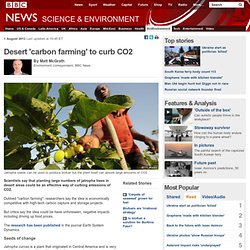 Dubbed "carbon farming", researchers say the idea is economically competitive with high-tech carbon capture and storage projects. But critics say the idea could be have unforeseen, negative impacts including driving up food prices. The research has been published in the journal Earth System Dynamics. Seeds of change Jatropha curcas is a plant that originated in Central America and is very well adapted to harsh conditions including extremely arid deserts. It is already grown as a biofuel in some parts of the world because its seeds can produce oil. Anglo-American mining plans threaten millions of salmon.