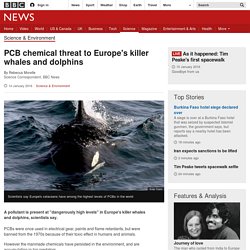 PCBs were once used in electrical gear, paints and flame retardants, but were banned from the 1970s because of their toxic effect in humans and animals. However the manmade chemicals have persisted in the environment, and are accumulating in top predators. The study finds Europe's cetaceans have levels of PCBs that are among the highest found in on the oceans.

Lead author Dr Paul Jepson, a wildlife veterinarian from the Zoological Society of London, said: "For striped dolphins, bottlenose dolphins and killer whales, we have mean PCB levels that are excessive - they are really high - probably the highest in the world right now, by some way. "Europe is a big big hotspot. " The contamination is so high that some populations of killer whales are facing extinction, he added. The research is published in the journal Scientific Reports. Image copyright CSIP/ZSL. Call for more protection for seagrass meadows - BBC News. Image copyright Frogfish Seagrasses - the underwater plants that act as nursery grounds for young fish - need more protection, say scientists. 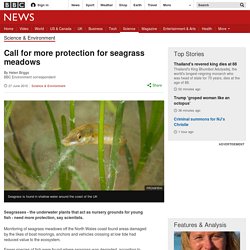 Monitoring of seagrass meadows off the North Wales coast found areas damaged by the likes of boat moorings, anchors and vehicles crossing at low tide had reduced value to the ecosystem. Fewer species of fish were found where seagrass was degraded, according to research published in PeerJ journal. The seagrass studied was near the village of Porthdinllaen, in Gwynedd. Researchers at Swansea University studied areas with both high and low cover over a 28-hectare stretch of sea bed. They also sampled fish living in the underwater meadows of flowering plants. There was a three-fold reduction in the diversity of fish species and invertebrates, such as prawns, shrimp, juvenile cod and juvenile plaice, in areas of low cover, said lead researcher Dr Richard Unsworth.

However, despite this protection it was still being degraded, he said. The beautiful creatures with a deadly streak - BBC News. The shimmering beauty of a tropical coral reef submerged in a sapphire sea is often equated with paradise. 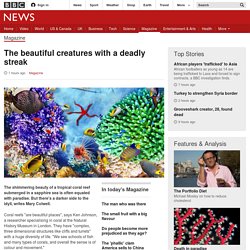 But there's a darker side to the idyll, writes Mary Colwell. Coral reefs "are beautiful places", says Ken Johnson, a researcher specialising in coral at the Natural History Museum in London. They have "complex, three dimensional structures like cliffs and turrets" with a huge diversity of life. "We see schools of fish and many types of corals, and overall the sense is of colour and movement. " Reefs often surround coral islands where white sands are lapped by gentle waves - R M Ballantyne captured this idyll in his 19th Century novel The Coral Island, a tale about 3 boys who are sailing through the Pacific Ocean.

"At last we came among the Coral Islands of the Pacific; and I shall never forget the delight with which I gazed - when we chanced to pass one - at the pure, white, dazzling shores, and the verdant palm-trees, which looked bright and beautiful in the sunshine. Find out more.