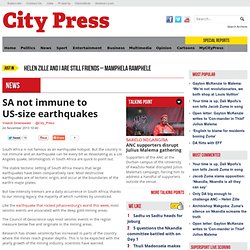 But the country is not immune and an earthquake can be every bit as devastating as a Los Angeles quake, seismologists in South Africa are quick to point out. The stable tectonic setting of South Africa means that large earthquakes have been comparatively rare. Most destructive earthquakes are of tectonic origin, and occur at the boundaries of the earth’s major plates. But low-intensity tremors are a daily occurrence in South Africa, thanks to our mining legacy, the majority of which rumbles by unnoticed. Like the earthquake that rocked Johannesburg’s world this week, most seismic events are associated with the deep gold-mining areas. The Price of Oil: Global Warming - Oil Change International. Global warming poses a major threat both to the environment and to global development. 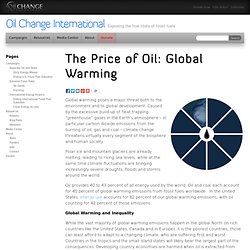 Caused by the excessive build-up of heat trapping “greenhouse” gases in the Earth’s atmosphere – in particular carbon dioxide emissions from the burning of oil, gas and coal – climate change threatens virtually every segment of the biosphere and human society. Polar ice and mountain glaciers are already melting, leading to rising sea levels, while at the same time climate fluctuations are bringing increasingly severe droughts, floods and storms around the world. Oil provides 40 to 43 percent of all energy used by the world. Oil and coal each account for 40 percent of global warming emissions from fossil fuels worldwide. In the United States, energy use accounts for 82 percent of our global warming emissions, with oil counting for 42 percent of those emissions.

Global Warming and Inequality Reducing Greenhouse Gases Oil Companies and Climate Change To be clear, these are oil companies. Take Action. The Price of Oil: Local Pollution - Oil Change International. Every link in the chain of oil production, from exploration through consumption, generates profound damage to the local environment and communities. 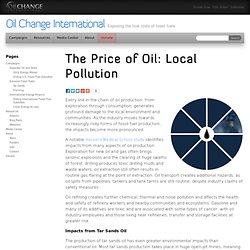 Oil refining creates further chemical, thermal and noise pollution and affects the health and safety of refinery workers and nearby communities and ecosystems. Impacts from Tar Sands Oil Impacts from Fracking for Gas. Report exposes threat to dam 'Lost World' The Akawaio and Arekuna fish in the Mazaruni river and its tributaries. 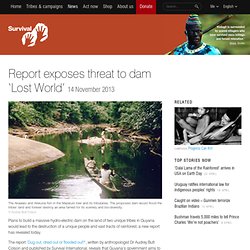 The proposed dam would flood the tribes' land and forever destroy an area famed for its scenery and bio-diversity. © Audrey Butt Colson Plans to build a massive hydro-electric dam on the land of two unique tribes in Guyana would lead to the destruction of a unique people and vast tracts of rainforest, a new report has revealed today. The report ‘Dug out, dried out or flooded out?’ , written by anthropologist Dr Audrey Butt Colson and published by Survival International, reveals that Guyana’s government aims to push ahead with one or more dams on the Upper Mazaruni River, which would flood out the entire Akawaio indigenous people and an Arekuna community. Guyana’s government has shrouded the project in secrecy. Ecuadorians Fight for Justice in Landmark Chevron Trial, Danny Glover Visits Contaminated Rainforest in Support. 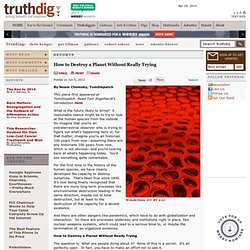 Read Tom Engelhardt’s introduction here. What is the future likely to bring? For the first time in the history of the human species, we have clearly developed the capacity to destroy ourselves. And there are other dangers like pandemics, which have to do with globalization and interaction. How to Destroy a Planet Without Really Trying The question is: What are people doing about it? There have been a range of reactions. In fact, all over the world—Australia, India, South America—there are battles going on, sometimes wars. Noam Chomsky: Canada on Fast-Speed Race 'to Destroy the Environment'

Canada is on a race "to destroy the environment as fast as possible," said noted linguist and intellectual Noam Chomsky in an interview with the Guardian published Friday. 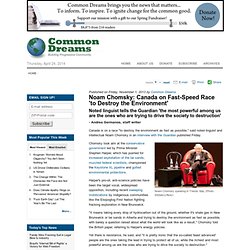