Smartwatch sony review. Sea otter return boosts ailing seagrass in California. 26 August 2013Last updated at 14:40 ET By Suzi Gage BBC News A sea otter enjoys a crab in California, and helps seagrass in the process The return of sea otters to an estuary on the central Californian coast has significantly improved the health of seagrass, new research has found. 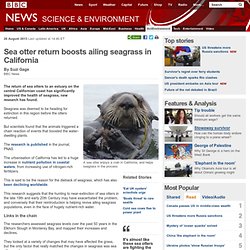 Seagrass was deemed to be heading for extinction in this region before the otters returned. But scientists found that the animals triggered a chain reaction of events that boosted the water-dwelling plants. The research is published in the journal, PNAS. The urbanisation of California has led to a huge increase in nutrient pollution in coastal waters, from increasing use of nitrogen-rich fertilizers. Continue reading the main story “Start Quote It's almost like these sea otters are fighting the effects of poor water quality” End QuoteBrent HughesUniversity of California This is said to be the reason for the dieback of seagrass, which has also been declining worldwide. UK urban meadows hope to help pollinators get buzzing. 12 August 2013Last updated at 20:24 ET By Mark Kinver Environment reporter, BBC News The UK has lost an estimated 97% of its wildflower meadows since the 1930s Researchers have planted flower meadows in four UK cities as part of a study to improve understanding of urbanisation on insect pollinators. 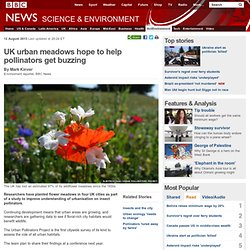 Continuing development means that urban areas are growing, and researchers are gathering data to see if floral-rich city habitats would benefit wildlife. BBC Nature - Urban hives boom could be 'bad for bees' 12 August 2013Last updated at 08:06 A boom in urban beekeeping could be doing the insects more harm than good, say scientists. 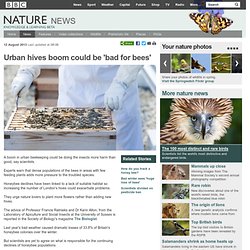 Experts warn that dense populations of the bees in areas with few feeding plants adds more pressure to the troubled species. Honeybee declines have been linked to a lack of suitable habitat so increasing the number of London's hives could exacerbate problems. They urge nature lovers to plant more flowers rather than adding new hives. The advice of Professor Francis Ratnieks and Dr Karin Alton, from the Laboratory of Apiculture and Social Insects at the University of Sussex is reported in the Society of Biology's magazine The Biologist. Last year's bad weather caused dramatic losses of 33.8% of Britain's honeybee colonies over the winter. But scientists are yet to agree on what is responsible for the continuing declines of honeybee populations. Charities and conservationists have been championing beekeeping in response to the statistics. Jaguar Corridor Initiative. Conserving Jaguars from Argentina to Mexico Jaguars, like many large, free-ranging wildlife species, are not constrained by political boundaries, nor are they as challenged or constrained by physical ones. 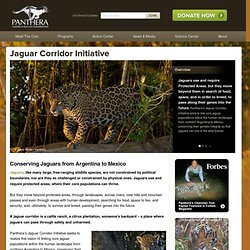 Jaguars use and require protected areas, where their core populations can thrive. But they move beyond protected areas, through landscapes, across rivers, over hills and mountain passes and even through areas with human development, searching for food, space to live, and security, and, ultimately, to survive and breed, passing their genes into the future. A jaguar corridor is a cattle ranch, a citrus plantation, someone’s backyard – a place where jaguars can pass through safely and unharmed.

Panthera’s Jaguar Corridor Initiative seeks to realize this vision of linking core jaguar populations within the human landscape from northern Argentina to Mexico, preserving their genetic integrity so jaguars can live in the wild forever. Hybrid grass 'could reduce flooding impact' 26 April 2013Last updated at 20:20 ET By Mark Kinver Environment reporter, BBC News The plots of the hybrid grass were planted on clay-rich soil, which is prone to run-off A hybrid farmland grass, developed by a team of UK researchers, could help reduce flooding, a study has shown. 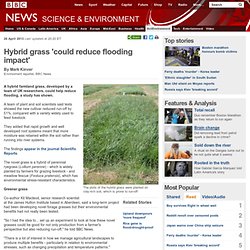 A team of plant and soil scientists said tests showed the new cultivar reduced run-off by 51%, compared with a variety widely used to feed livestock. They added that rapid growth and well developed root systems meant that more moisture was retained within the soil rather than running into river systems. The findings appear in the journal Scientific Reports. The novel grass is a hybrid of perennial ryegrass (Lollium perenne) - which is widely planted by farmers for grazing livestock - and meadow fescue (Festuca pratensis), which has environmental stress-resistant characteristics. Greener grass "It creates more storage capacity for water.