Online boutique for the misfits and miss legits. Let's party! 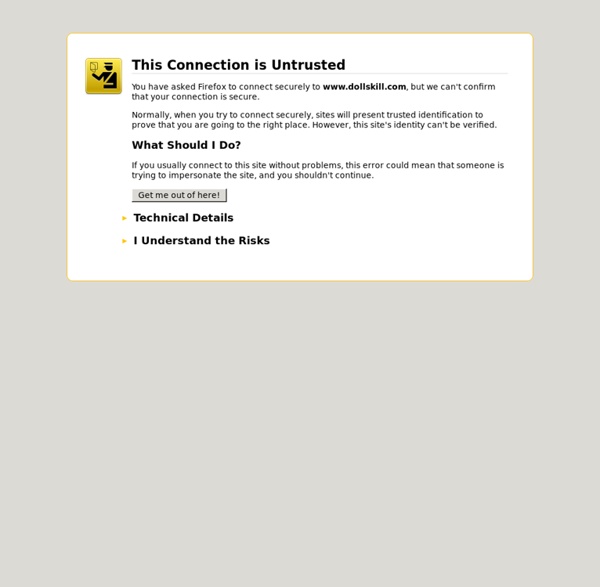 Edible Cups made from Jello Jelloware cups are made entirely out of agar and come in three tasty flavors. The cups were designed to be thrown into the grass after they are used, as agar is a seaweed extract and actually nurtures the growth of plants. For more cup designs, check out: 17 Cool and Unusual Mugs Dolls Kill is raising up to $15 million for its edgy fashion brand made for ‘misfits’ When founder Bobby Farahi met Shaudi “Shoddy” Lynn, it was at a rave in L.A. Farahi has said he was immediately drawn to the fashion sense of Lynn, who was a DJ at the time; she, meanwhile, might have appreciated the business acumen of Farahi, who had already sold a broadcast monitoring service called Multivision to a rival company. As Farahi told Inc. magazine several years ago, the couple, now married, decided to try their hand at business together, calling it Dolls Kill and selling foxtail keychains before eventually evolving the brand into an online boutique that sells edgy, risqué clothes and accessories from companies like Killstar and Motel, both in the U.K., as well as makeup from another London company called Skinnydip. Shoppers like what they see, evidently. Some of that capital is being used to test out offline stores. Dolls Kill is sometimes likened to Nasty Gal, founded in 2006 by Sophia Amoruso. At the time, industry analyst Richie Siegel told the L.A.

Hot Chocolate on a Spoon Hotchocspoons: Hot Chocolate on a Spoon December 7, 2009, 1:30 pm 20 Comments Hotchocspoons from the Chocolate Company in Europe are the perfect hot chocolate-making device: 50 grams of chocolate are melted down and then solidified with a nice, big wooden spoon inside for convenient stirring. [via Notcot] —Raphael Brion Tags: chocolate, hot chocolate, Hotchocspoons Welcome Cara Trinder of Hysteria Machine - Kisses & Chaos LONG, long ago on a social network that’s never far enough away (you know we all hate to love it and love to hate it) I discovered headdress heaven. If a neo-tribal pagan wood nymph got frisky with a flapper who also happened to be a Valkyrie their baby would be Hysteria Machine – or, more precisely, Cara Trinder, the creative goddess behind Hysteria Machine. Naturally, with such a serious creative girl crush in full swing I had to ask her to join in the random and ridiculous fun of The Same 7. And much to my pleasure she was more than happy to oblige. So without further ado I present you the glorious, glamorous genius of Cara Trinder: 1) In 10 words or less tell us what makes you so freakin’ awesome…and don’t be modest. 2) Did you (or do you currently) have an imaginary friend(s)? 3) Do you believe in ghosts?” 4) What one thing scares the ever-loving crap out of you more than anything else in the whole wide world?” 5) Sunrise, sunset, new moon or full moon?” 7) It’s the zombie apocalypse.

Glamour Doll zero waste daniel Sneakers Disguised As Dress Shoes by NobleSole Risks and challenges WE'VE DONE THIS BEFORE - We know to get the shoes made properly and on time. Our last campaign encountered a few challenges that we learned from and have applied those lessons to this campaign. SURVEY - Fill out your survey as soon as the campaign is over. 2 weeks after the campaign is concluded, you will be emailed a link to a Kickstarter survey. QUALITY - We are working with one of the top footwear manufacturers in Portugal. SHIPPING - As soon as the campaign is over, you’ll be mailed a link for a survey. This time we will start manufacturing 30 days after the close of the campaign. RETURNS - If you receive the wrong size or colour, you have 30 days to exchange the shoes. If, once you receive your shoes, you wish to change the size/colour, there is a $15 fee to cover us shipping you a new pair. Learn about accountability on Kickstarter

Camper Together Ferrara, Italy. 1951 When Michele De Lucchi joined the Together project, he turned to the most provocative stage of his brilliant career to design venues that could only be Camper stores. The architect/designer and the footwear brand resurrected the legendary 80s style of Memphis and materialised it in the space with impeccable rigour. Technical talent with an emotional response: in De Lucchi's own words, "the connection that distinguishes a good design". Sobre Michele De Lucchi "From radical, non-conformist designer to internationally famed creator."