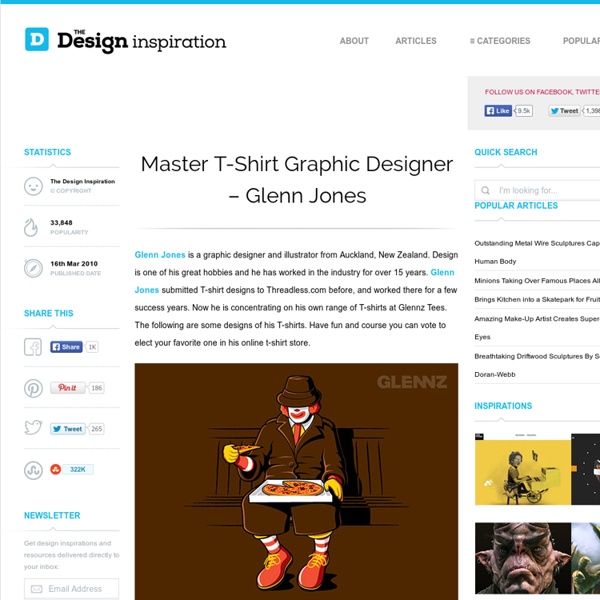 Nicoletta Ceccoli Under - Art, Illustration, Inspiration Crows Surrealism, fantasy, magic, strange creatures and a beautiful doll-like character among all these with very distinct innocent facial features. Nicoletta Ceccoli, an award winning children’s book illustrator, has illustrated over 30 books since 1995 mainly with USA, UK , and Italian publishers. In 2001 she was awarded the Andersen prize ‘Baia Delle Favole’ as the best illustrator of the year in Italy. The Magician`s Assistant Contrary Mary Tower Leda (left) - Giocoliere (right) Sheryl Daphne (left) - and Kleodora (right) Toyland Cow Girl (left) - Fishingroom (right) She's so lovely Lolipopland Katherine Charlotte The Princess and the Prey (left) - Agata (right) Birdcage Evidently Goldfish The Elephan`s Journey Octopussy Girl and Candyforest Fight 2 Cow Girl and Fishingroom Aurora If you like this post then you might also like one of these:

Weird and Wacky Furniture By Straight Line Designs | DeMilked - StumbleUpon EmailEmail Straight Line Designs is a one-of-a-kind workshop that has been operating out of Vancouver, British Columbia for the past 25 years. In addition to installations, sculptures and private commissions, designer Judson Beaumont and his staff of eight full-time craftspeople have designed and constructed a variety of wacky cartoon-style furniture and projects for public institutions and children’s exhibitions throughout North America and abroad. Website: StaightLineDesigns.com 1. 2. 3. 4. 5. 6. 7. 8. 9. 10. 11. 12. 13. 14. 15. 16. 17. 18. 19.Daddy Long Legs

blog  – Golden Ratio in logo designs Golden Ratio in logo designs. Beauty and aesthetics have been praised from time immemorial. But little did people know that the most effective, perfectly balanced, and visually compelling creations followed the tid-bits of mathematics. Golden Ratio Golden Mean, Golden Section, Divine Proportion are all common names for what is known as the Golden Ratio which is based off the number phi (φ) = 1.61803398874… discovered by Italian Mathematician Fibonacci. the ratio between these numbers soon become very close to φ (1.618). What’s so amazing about this number? Logos with golden ratio So, it was not surprising when I found the invasion of φ in logo designs. National Geographic Remember the yellow square in the National Geographic logo? Pepsi The new logo of Pepsi has been much simpler and effective, characterized by spare, pure design. Apple Apple is one of those very few companies that do not have the company name in their logo. iCloud Toyota The logo of Toyota consists of three ovals. References

15 Ways to Get Past an Awkward Moment Aug 13, 2012 We’ve all been in awkward situations, our lives are full of them. Nobody’s perfect, but how you handle it can turn an awkward moment into a partial win. Below you will see 15 awkward situations and what these people did to try and turn it around. 1. 2. 3. 4. 5. 6. 7. 8. 9. 10. 11. 12. 13. 14. 15. *Bonus* If you enjoyed this post, the Sifter highly recommends: Paintings and illustrations by Valentina Brostean Heavily inspired by urban culture and the pop surrealism movement, Valentina Brostean has developed a unique and very personal style.She has an eye for the strange beauty in the grotesqueries of life. Inspired by the relationship between dreams, natural world and the emptiness of consumer culture, she creates and brings unique characters to life from her imaginary world. Her body of work is built of melancholy interaction between man-made status symbols and frozen moments of the utopian childhood memories. Strongly focused on figurative narration her characters simply reflect us – modern society without its masks, without the fake presentations that make us acceptable to whatever group we are a part of. If look closely at her work, one might come to realize that her characters are really kind of self-portraits, set in a fantastical landscapes of imaginary world which echoes of her own… a bitter, yet sweetly coated prescription for modern life.

NESTREST Doesn't that picture look so peaceful and inviting? I think I'm in love. That dangling, serene little pod is a NESTREST, designed by Paris' Daniel Pouzet and Fred Frety. It's described as an over-sized bird's nest that's perfect for relaxation, meditation and open-air conversations. Judith Ann Braun's Fingers Are Magical With an art career spanning more than three decades, Judith Ann Braun has tested the limits of her artistic musculature. She began as a self-described “realistic figure painter,” and worked through the struggles common to anyone who endeavors upon an artistic pursuit, that of searching for one’s own voice in the chosen medium. Fast forward to the 21st century where the evolution of Braun’s work has brought us to the Fingerings series, a collection of charcoal dust landscapes and abstracts “painted” using not brushes but her fingertips. Braun has a specific interest in symmetry, as evidenced by the patterns she follows in a number of the Fingerings pieces as well as work in the Symmetrical Procedures collection. Her fingerprints are obvious up close in some of the paintings, though a step back and the grandeur of Braun’s imagination sprawls into a landscape of soft hills, overhanging trees, delicate florals, and a reflective waterway. Share With Your Friends

Retro Futurism Retro Futurism Frank R. Paul was an illustrator of US pulp magazines in the science fiction field. Many many years ago (~1940), Frank R. 7th of July 2010 Probably Related Retro Futuristic Illustrations by Klaus Bürgle Tavis Coburn’s Amazing Retro Program Covers #7 by disonyando Retro Style Recovery Kits Travel Status Back home since 54 days Currently in: Switzerland Oh dear, do you realise how old your browser is? Artist Takes A New Drug Each Day And Draws His Self Portrait On March 30, 1995 Bryan Lewis Saunders made the decision that he was going to draw one self portrait every day for the rest of his life. Several portraits later Bryan began to search for a way that would profoundly affect his perception of himself. That is when he came up with the idea to take a different drug each day, and then draw his self portrait while under the influence. Bryan now has over 8,000 portraits and like fingerprints, snowflakes, and DNA, each one is different. Bryan explains that “For hundreds of years, artists have been putting themselves into representations of the world around them. I am doing the exact opposite. Bryan created a 5 minute long film that includes 3,000 of his self-portraits entitled “Near Death Experience” (see video below). Psilocybin Mushrooms Cocaine Absinth Hash Crystal Meth Abilify Abilify / Xanax / Ativan Dilaudid Huffing Gas Valium Salvia Divinorum Ritilin Morphine Marijuana Bath Salts Butane Honey Oil “Near Death Experience” Share With Your Friends

TRAILER I Believe I Can Fly (flight of the frenchies) ShareThis If you would like to contribute to our future projects, please download the film (720p HD) for $7 (approx 5€) below, or make a donation via the link – proceeds will go to the highliners and the smallest donation will help turn more dreams into reality. Also check out the Frenchies' new film "Petit Bus Rouge" I Believe I Can Fly (Flight of the Frenchies) is an amazing journey into the unknown. Two friends test the boundaries of free flight and friendship as they take their passion in a totally new direction. We travel from the Verdon gorge to the skyscrapers of Paris, and finally to the spectacular cliffs and fjords of Norway - where the pair plan to put weeks spent training to the ultimate test. The talented friends featured in my film have been instrumental in the innovation and development of highlining and baselining, and this exciting project was born from their passion and love for what they do. No. times played: