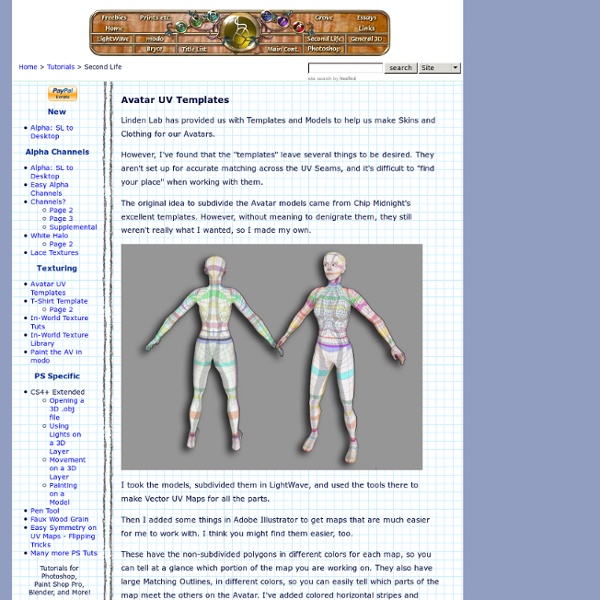 <p class="noScript">I notice you have Javascript turned off. Unless you did that to print, the page is more fun if you turn it on. Thanks! Linden Lab has provided us with Templates and Models to help us make Skins and Clothing for our Avatars. However, I've found that the "templates" leave several things to be desired. The original idea to subdivide the Avatar models came from Chip Midnight's excellent templates. I took the models, subdivided them in LightWave, and used the tools there to make Vector UV Maps for all the parts. Then I added some things in Adobe Illustrator to get maps that are much easier for me to work with. These have the non-subdivided polygons in different colors for each map, so you can tell at a glance which portion of the map you are working on. Most importantly, I think, I've kept the original maps as Vector Smart Objects, which you can use if you have Adobe CS2 or better. I have provided several ways to download these files, in several different formats.

Video conversion with DownloadHelper Note that this documentation only applies to Video DownloadHelper 5.1.0 and above. What is the converter on Video DownloadHelper ? The converter associated to Video DownloadHelper is an external program installed on your computer that is called in the background to perform operations that could not be carried out from a browser add-on. It is requested in 3 situations: Aggregating audio and videos: some video variants on some sites are not available as a single file, but instead, the video and the audio are downloaded separately then assembled locally to generate a unique file that you can use. Convert local files: If you already downloaded some video files and you want to convert them afterwards, click the VDH icon in the toolbar, the panel opens, click Convert local files at the top to start the process. How to install the converter ? The converter can be installed on all platforms: Windows, Mac and Linux, but the install procedure varies depending on the platform. Using conversion rules

Category:LSL Library Script Library NOTE: Please add your scripts to this page and then add them to a category on the Categorized Library page. Come to this page to see complex examples that show how to combine parts of LSL. Go to the LSL Examples page to see brief examples of how to use parts of LSL. Why collect complex examples here? Well, ... There is a treasure trove of user developed scripts that have become hard to find over time throughout Second Life's web server revisions and redesigns. The wiki medium is well-suited for a script library due to its revision based historical foundation. Rules for posting: Your script must be tested and working. LSL Script Library Support Script Library These are scripts in other languages, intended to be run on other systems that support scripts written in LSL See Also Subcategories This category has the following 2 subcategories, out of 2 total. Pages in category "LSL Library" The following 200 pages are in this category, out of 223 total.

The Mysterious Connection Between Sirius and Human History | Secret Arcana Since ancient times and across multiple civilizations, Sirius, the dog star, has been surrounded with a mysterious lore. Esoteric teachings of all ages have invariably attributed to Sirius a special status and the star’s importance in occult symbolism is an attestation of that fact. What makes Sirius so special? Is it simply due to the fact that it is the brightest star in the sky? Or is it also because humanity has an ancient, mysterious connection with it? Sirius is located in the constellation Canis Major – also known as the Big Dog – and is therefore known as the “dog star”. Artifacts of ancient civilizations have revealed that Sirius was of a great importance in astronomy, mythology and occultism. Associating Sirius with the divine and even considering it as the home of humanity’s “great teachers” is not only embedded in the mythology of a few primitive civilizations: It is a widespread belief that has survived (and even intensified) to this day. In Ancient Civilizations

Rudolf Steiner Ancient Egypt: the - Seshat (Seshet, Sesheta) Symbols: seven-pointed star or flower atop a pole, palm branch, writing pen and palette, papyrus scrolls and books Seshat was an ancient goddess of writing and measurement. She was also the patroness of mathmatics, architecture and record-keeping. Though she shared these duties with her husband, Thoth, Seshat was primarily a royal goddess. Throughout Egypt's history, Seshat was shown recording the number of captives and other booty taken during the king's military campaigns. Seshat was portrated as a woman wearing a dress and the priestly leopard skin. Seshat carried many titles, such as "Lady of Builders", "Mistress of Books", and "Foremost in the Library". Digg This! Del.icio.us Stumble Upon

Iconoclast Report with Carolyn Harris radio show Khokhmah and Sophia: the Judaic and Gnostic Goddess Wisdom goddesses are a primary survival of Goddess consciousness within patriarchal systems. In an intact Goddess cosmology, Wisdom is not sharply differentiated from other divine qualities. In that sense the separation is artificial, and typical of the divisions that arise when theologians erect their esoteric hegemonies. But I’m struck by the recurrence of Wisdom deities in the “major” religions, and how archaic streams of Goddess reverence continue to flow through them under the doctrinal surfaces. For seekers groping a way back to Origins, it can be illuminating to meditate on divine Wisdom in these forms. Khokhmah and Sophia Max Dashú The ancient Hebrew name for Wisdom is Khokhmah, a feminine noun. Another beautiful passage likens Wisdom to “a flame of stars through the night.” I am Isis, mistress of every land I laid down laws for humanity and ordained things that no one may change... The biggest community of Therapeutae lived near the Mareotic lake in northern Egypt.

Jupiter in Aquarius 2009 e.v. Jupiter enters Aquarius (Jupiter in Aquarius: January 5, 2009 – January 18, 2010) A technological era of economic advancement begins January 2009 with the planet of luck and fortune, Jupiter, newly entering the constellation Aquarius. Jupiter in Aquarius brings innovative solutions to economic problems. It also allows us to realize our economic strength as whole communities, bringing people together to work towards building financial strength and salvation. A review of the past: Jupiter in Capricorn (December 18, 2007 – January 5, 2009) Since December 18, 2007, Jupiter was traveling through Capricorn, focusing the magic of great wealth and expense on such Capricorn-like things as construction, building, banking, corporate growth, architectural feats, estate management, and administrative expertise. Capricorn is conservative by nature, and requires the flow of prosperity to be useful, attainable, applicable, substantive, and controllable. Jupiter in Aquarius

Gorish: voudon In 1929 a travelogue was released that would, through the chain reaction it set off, have a profound effect on American popular culture and by extension the American collective consciousness. It was written by a fellow with a questionable resume of personal traits said to include alcoholism, occultism, sensory deprivation, and sadism, who would ultimately commit suicide by pill-overdose. His is not a household name, and is rarely spoken, yet it is through the continued fascinated invocation of another name altogether that we unknowingly evoke his legacy: Zombie! Zombie!! Zombie!!! He was William Buehler Seabrook, a reporter and Lost Generation writer (claiming the minor distinction of having written the first celebrity rehab tell-all) and it was his book, The Magic Island, a sensationalized account of his voodoo-mad travels throughout Haiti, that first ushered our beloved un-dead bugaboo, the zombie, onto American shores. Zombie! A search for more info on Mr. Jay A.