Goins, Writer: On Writing, Ideas, and Making a Difference 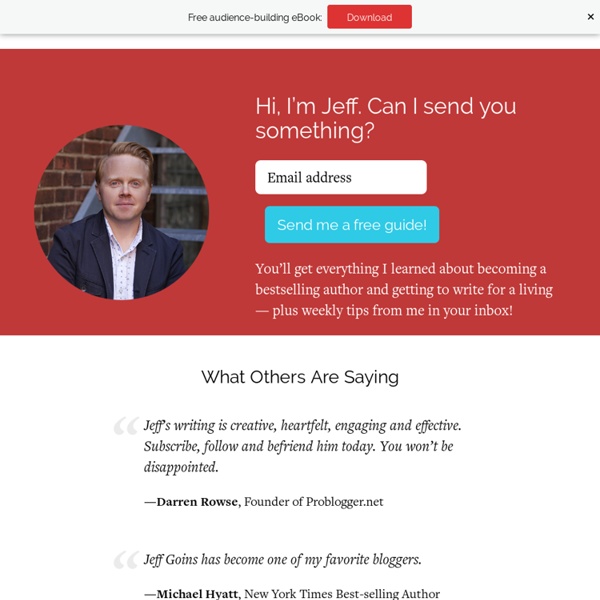 We’ve talked before about why you need to find your tribe — a unique group of fans, friends, and followers. This can be done with a blog, radio show, or speaking platform. But how do you actually do this? How do you create a community that wants to hear what you have to say? If we ask Seth Godin, he would say you need to communicate a message that is personal, relevant, and anticipated. So what does that look like?

Radio for Writers Searching for your muse? You'll find it here! Writers FM broadcasts live across the Web, 24 hours a day. To Touch The Hem of Bill Johnson’s Garment… ﻿﻿Man, I’ve been reading back through a lot of my old posts and I totally forgot I was supposed to do one where I spoofed the annoying restaurant photo takers by taking photos of the dumps I take AFTER eating an exquisite meal and posting THOSE along with the review. I’ll be back in DC starting next weekend, and you know how I roll when it comes to the dining….so this may happen, I “shit” you not! Get it? I’m a card. TwistedSifter Apr 22, 2014 Picture of the Day: A Satellite View of Earth on Earth Day A SATELLITE VIEW OF EARTH ON EARTH DAY Satellite Image by NASA NOAA’s GOES-East satellite captured this stunning view of the Americas on Earth Day, April 22, 2014 at 11:45 UTC/7:45 a.m.

How to create and keep an art journal by aisling d'art ©2006 Artist's journals are illustrated diaries and journals on any theme. An art journal can be a record of your daily thoughts, a travel journal, an exercise or diet diary, a dream journal, a place where you jot down your goals or to-do lists, or... well, almost any record that you'd like to keep in a book or notebook. They become "art journals" when you add any kind of illustration or embellishment to the pages. These pages share ideas and tips for creating and keeping your own illustrated journal. How to create an art journal

Miscellaneous Ramblings of an Old Man: The Overlords Have you ever noticed that in general people do not advance in government and commerce, etc. because they are virtuous? Often not even because they are the most skilled or talented at their craft. Again, in general and yes there are exceptions, the worst of us are advanced. Why Hollywood's Biggest Films Are Leaving L.A. for London From "Guardians of the Galaxy" to the next "Star Wars" film, the hottest blockbusters are being lured abroad by London's lucrative tax credit Brad Pitt, Robert Downey Jr., Vin Diesel and J.J. Abrams call Los Angeles home, but for the world premieres of their latest films like "Iron Man 3" and "World War Z," they all decamped for the new hub of Hollywood’s biggest productions — London. It is a testament to how the U.K. city is attracting filmmakers in droves because of lucrative tax incentives that make one of the most expensive cities in the world cheaper to shoot films in than Los Angeles.

Journaling your Past ©2005 - 2007 by aisling d'art I'm probably best-known for my personal journaling workshops and online art journals. And, I want to share some of my journaling tips with you in this free ebook about journaling your own history. Journaling Your Past is a free 26-page ebook, and it's like taking one of my popular workshops at home. A Collection of Odd.: Hitting A Brick Wall... Auto Bail Out The Windshield Hitting A Brick Wall... Auto Bail Out The Windshield I was told that the safest place in a car is in the passengers seat during an accident. Well, not in this crazy ride we call the economy.

Flavorwire As you already know, The Avengers is pretty much already the people’s choice movie of the year, and has inspired all manner of pop culture tributes in recent months, from the relatively high brow to the delightfully low brow. Well, here’s just one more for you to add to the list, and it comes with a bonus — in addition to being a charming idea, these cute Avengers-themed cocktails, created by the genius mind (and great illustrator) behind The More I Arty, actually look pretty delicious. And hey, a sampling of your favorite before you go see the film in 3-d might just improve the experience. [via Pop Chart Lab]

First Page Creativity New journals are exciting–the possibility, the fresh approach, the hope you will be as filled with opportunity as the journal is filled with pages. And then that clutch of fear: the. first. page. Suddenly the possibility, joy, newness, excitement is filled with panic. War Tard: Phase II: Why the US wants to attack Iran Looks like the US is playing musical chairs with its carrier groups in the Gulf of Oman. The USS Stennis Carrier Group moved to the Indian Ocean last week so the US could transit another carrier, the Abraham Lincoln, through the Straits of Hormuz just to remind the Iranians how screwed they'd be if the shooting starts. The carrier was escorted by the cruiser USS Cape St. George, two destroyers, the Royal Navy anti sub frigate HMS Argyll and even the French got an invite and sent along their own La Motte-Picquet anti sub frigate to fill out the international nature of the party. That's pretty interesting and those frigates show the West's concern at the Iranian submarine threat and the small chance that the Iranians might manage to land a torp in the nuke belly of a carrier. Sure, it's unlikely but the Chinese did manage to sneak a diesel powered sub into the middle of a carrier group during USN exercises off Taiwan in 2006.

Digital Art Journaling – Resources/Tutorials/Links Art Journaling is HOT right now. It’s a fun way for each individual to get Artsy while Journaling one’s life stories. Art as therapy is the premise and, evidently, judging by the sheer number of blogs and folks who are doing it, it must be working!. The art, itself, may be the therapy, using the raw emotion to influence their design in the art.