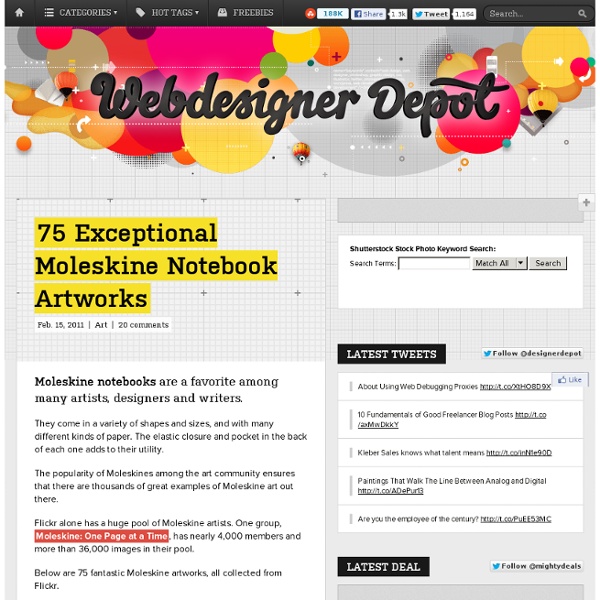 Moleskine notebooks are a favorite among many artists, designers and writers. They come in a variety of shapes and sizes, and with many different kinds of paper. The elastic closure and pocket in the back of each one adds to their utility. The popularity of Moleskines among the art community ensures that there are thousands of great examples of Moleskine art out there. Flickr alone has a huge pool of Moleskine artists. One group, Moleskine: One Page at a Time, has nearly 4,000 members and more than 36,000 images in their pool. Below are 75 fantastic Moleskine artworks, all collected from Flickr. Fine Art and Illustration A lot of traditional artists opt for Moleskines, due to their variety of paper types and their durability. Moleskine 2 by Andy Gosling: A heart and the letter “A”, created from interwoven arteries. Moleskine book 5, page 72 by Steve Loya. Moleskine Sketches by Jimbradshaw. Moleskine book 1, pages 61 and 62 by Steve Loya. Moleskine “A cat in my head” by Framboisine Berry.

33 Free and Online Tools for Drawing,Painting and Sketching There are many professional and of course paid programs for graphic designers or digital illustrators.But in recent years many online tools are also released for drawing,painting or sketching.Today,we’ve collected free,online drawing and painting tools.Ok,these tools are not professional and maybe just for spending a little time when you are bored but when you see some examples in the below sites you may be surprised. If you would like more professional style tools check out a company like Procore, but it might not be free. Some of these free tools are for kids and students and some are for more talented people.You can also share your creations with your friends directly. deviantART muro

artwork by lawrence yang *UPDATE* - I've been working on a new site so haven't been keeping this up to date -- in the meantime if you'd like to see my latest work, please find me on Facebook, Twitter, or Instagram. And as always, you can email me with any questions! Thanks, Lawrence Cyklop artifies street poles French artist Cyklop Paris is all set to cover different cities with his wonderful art of customizing poles and other objects .Cyklop plays extensively with the symbol of an eye. This symbol is found in almost all different part of the streets and can be eaisly identified as Cyklop street art . Incoming search terms: colorful poles Comments

Tutorial Tuesday: Drawing the Female Figure Tutorial Tuesday is here, and this week we’re going to tackle the Female Figure in comics. The basic tutorials and tips I’m going to discuss here applies to drawing females in your typical American mainstream action-hero style. You’ll notice that females vary greatly from genre to genre – you wouldn’t necessarily use some of the tips in this tutorial to draw females in manga, or if you were doing an Indie style comic where the females are normal in appearance. The women in mainstream comics tend to be hyper-sexualized, over proportioned and exaggerated idealistic forms, much like their beefcake counterparts on the male side. But – what you can take from this is the basic principles of anatomy.

Never Be My Friend When I'm bored, I browse through my friends' Facebook images, choose my favorites, and draw them. Sometimes I take... liberties. Let's just call it artistic license. 3D Paintings on Panes of Glass Using multiple layers of clear glass, Canada based David Spriggs and Chinese born Xia Xiaowan, transform flat artwork into 3D sculptures. Viewers are treated to different shifting perspectives of the works based on where they stand in the art space. Spriggs work revolves around powerful explosive imagery, often resembling storms, cosmic blasts or firework like explosions.

carnovsky RGB Color est e pluribus unus RGB is a work about the exploration of the “surface’s deepness”. RGB designs create surfaces that mutate and interact with different chromatic stimulus. Carnovsky's RGB is an ongoing project that experiments with the interaction between printed and light colours. The resulting images are unexpected and disorienting. The colors mix up, the lines and shapes entwine becoming oneiric and not completely clear. The Quickstart Guide to a Decluttered Home By Leo Babauta One of my favorite habits that I’ve created since I changed my life 9 years ago is having a decluttered home. I now realize that I always disliked the clutter, but I put off thinking about it because it was unpleasant. The thought of having to deal with all that clutter was overwhelming, and I had too much to do, or I was too tired, so I procrastinated. Clutter, it turns out, is procrastination. But I learned to deal with that procrastination one small chunk at a time, and I cleared it out.

Masterpieces Painted By The Chinese TotallyCoolPix A Van Gogh? You’ve got it. A Dali? You’ve got it. A Rubens? You’ve got it. With Maidens of Mystery - The artwork of Audrey Kawasaki Audrey Kawasaki is a Los Angeles-based painter, known for her characteristic works that are painted directly onto wood panels. Kawasaki studied fine art painting at the Pratt Institute in New York City, but left after two years without completing her degree. The emphasis that New York art standards put on conceptual art was at odds with her painting ideologies and was the reason for her leaving. The unique style that she renders to her artworks can be described as a fusion of eastern as well as western traditions such as Art Nouveau and Japanese Manga comics. Audrey’s paintings are portrayals of young, mesmerizing women who come across as innocent and tantalizing at once. Her use of subdued colors, misty backgrounds, and delicate embellishments creates a magical effect within her paintings.

Moss graffiti making tips (1 photos) Posted on February 23, 2012 in Humor If you’re new here, you may want to subscribe to our RSS feed or follow us on Facebook or Twitter . Thanks for visiting! Rate this Post Loading ... So... 15 Free Guides That Really Teach You USEFUL Stuff - StumbleUpon Advertisement Over the past months, we’ve written quite a few PDF manuals for you, on all kinds of diverging subjects, including BitTorrent, iTunes, iPhone, Twitter, Mac, Linux, Photoshop and several other topics. Freely available to MakeUseOf subscribers, there are now multiple manuals released every month, for everyone to enjoy. After releasing 15 manuals and nearly half a million downloads we thought it was about time to look back and review what has been published so far. Enjoy!

Story Behind Those Stunning Cinematic Gifs Here at theMET, we're always looking for creative projects that catch our eye. More than anything, we love posting about work that pushes boundaries, showing our audience something that has been changed, flipped or spinned into something magically different. Then, we see it as our job to find out the story behind such projects. What inspired the artist or photographer to start down that path? Big Doodle Big sharpie doodle! Big Doodle - sharpie on mat board - 40" x 32" Artwork © Lawrence Yang 2009 my blog | my site | purchase inquiries