What is Plagiarism? - Plagiarism.org. Many people think of plagiarism as copying another's work or borrowing someone else's original ideas. But terms like "copying" and "borrowing" can disguise the seriousness of the offense: According to the Merriam-Webster online dictionary, to "plagiarize" means: to steal and pass off (the ideas or words of another) as one's own to use (another's production) without crediting the source to commit literary theft to present as new and original an idea or product derived from an existing source In other words, plagiarism is an act of fraud.

It involves both stealing someone else's work and lying about it afterward. But can words and ideas really be stolen? According to U.S. law, the answer is yes. All of the following are considered plagiarism: Most cases of plagiarism can be avoided, however, by citing sources. What about images, videos, and music? Unintentional Plagiarism: Definition & Examples Video with Lesson Transcript. Internet Piracy. Is internet piracy a bad thing? Piracy is bad We would be robbing the company of their profits. 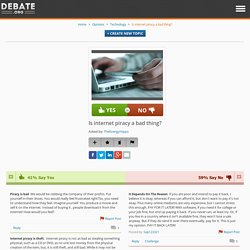 Put yourself in their shoes. You would really feel frustrated right? So, you need to understand how they feel. Imagine yourself. You produce a movie and sell it on the internet. TEDxChallengeEarlyCollegeHighSchool. Internet Piracy: The Effects of Streaming Services and the Digital Marketplace – Columbia Science and Technology Law Review. Online disinhibition effect.

Online disinhibition is the lack of restraint one feels when communicating online in comparison to communicating in-person.[1] Possible influencing factors toward online disinhibition include anonymity, invisibility, asynchronous communication, empathy deficit, in addition to individual factors like personality and culture background.[2][3][4] The manifestations of such effect could be in both positive and negative directions. 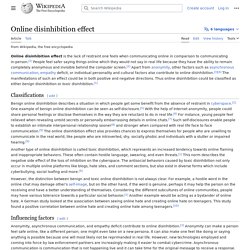 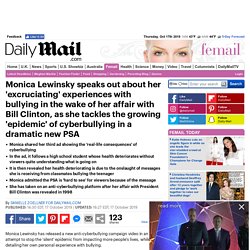 The campaign video is the third in a powerful series of ads aiming to inform the public about the dangers of cyberbullying and why it should be considered a health epidemic. For Monica, the message is a personal one after the bullying she experienced in 1998 when she went from a private citizen to a public figure after the affair between herself and President Bill Clinton was revealed.

Sending a message: Monica Lewinsky shared her third campaign ad showing the 'real-life consequences' of cyberbullying Silent message: In the ad, it follows a high school student whose health deteriorates without viewers quite understanding what is going on Epidemic: The ad, called The Epidemic, then watches as the student takes pills and ends up in the hospital with doctors attempting to revive her. Cyber Bullying Statistics - Bullying Statistics. Cyberbullying - National Bullying Prevention Center. Just as the use of technology itself has evolved, so has the ability to bully. Bullying, once restricted to the school or neighborhood, has now moved into the online world. Bullying through the use of technology is referred to as “cyberbullying.” Cyberbullying is the use of technology to repeatedly and intentionally harass, hurt, embarrass, humiliate, or intimidate another person.

As adults, thinking back, it was just a generation ago that kids and teens were asking their parents for a phone in their room — maybe even one with a separate line or three-way calling — so they could easily and somewhat privately connect with more friends. Today, a kid or teen’s desire to connect with friends has not changed, but the options for doing so have grown tremendously.

Cyberbullying can happen anywhere there is online social interaction. Cyberbullying: Definition and Dynamics 1. electronic forms of contact 2. an aggressive act 3. intent 4. repetition 5. harm to the target (Hutson, 2016 ) Persistent. Cyberbullying. Bullies and mean girls have been around forever, but technology now gives them a whole new platform for their actions.

The old "sticks and stones" saying is no longer true — both real-world and online name-calling can have serious emotional consequences for our kids and teens. It's not always easy to know how and when to step in as a parent. For starters, most kids use technology differently than we do. Free Plagiarism Checker for Teacher and Students. Terms of Use This document explains the Terms of Use under which you may use PaperRater.com ("PaperRater"), its products and services. 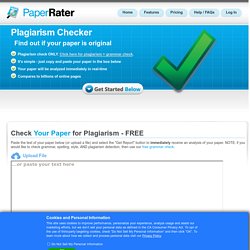