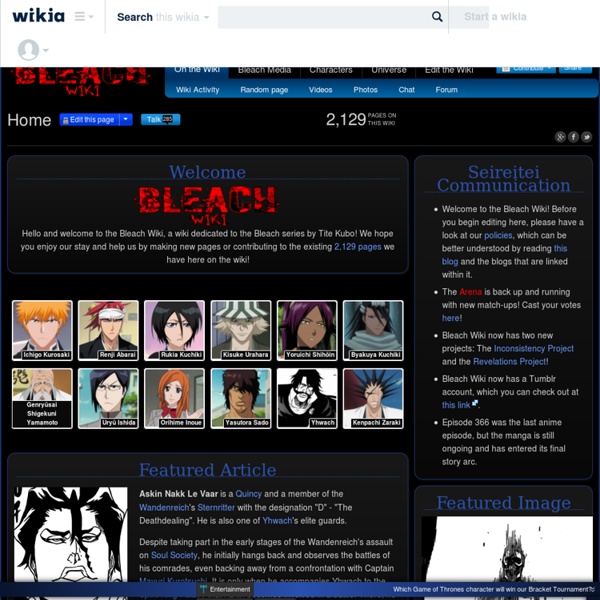 Ghost in the Shell Title[edit] Shirow has stated that he had always wanted the title of his manga to be "GHOST IN THE SHELL", even in Japan, but his original publishers preferred Kōkaku Kidōtai (攻殻機動隊?). He had chosen "Ghost in the Shell" in homage to Arthur Koestler's The Ghost in the Machine, from which he also drew inspiration.[1] Setting[edit] MediaMiner.org - Anime FanArt & FanFiction Rukia Kuchiki Rukia Kuchiki (朽木 ルキア, Kuchiki Rukia) is the lieutenant of the 13th Division under Captain Jūshirō Ukitake. Rukia is the adoptive sister of Byakuya Kuchiki and a friend of Ichigo Kurosaki. Appearance Short and petite, Rukia has light skin and violet-colored eyes.

Narutopedia Elfen Lied Elfen Lied (エルフェンリート, Erufen Rīto?) is a Japanese manga series written and illustrated by Lynn Okamoto. It was originally serialized in Shueisha's Weekly Young Jump from June 2002 to August 2005, with the 107 chapters collected into twelve tankōbon volumes. Elfen Lied revolves around the interactions, views, emotions, and differences between human beings and the Diclonii, a mutant species similar to humans in build but distinguishable by two horns on their heads and "vectors", transparent telekinetically controlled arms that have the power to manipulate and cut objects within their reach. The series is centered on the teenage Diclonius girl "Lucy" who was rejected by human beings and subsequently wants revenge. Plot and characters[edit]

Ichigo Kurosaki After scaring some skateboarders away from a dead girl's resting place, Ichigo, apologizing to her, promises to bring her some new flowers to replace those damaged by the skaters, telling her to go to heaven quickly.[64] That evening, Ichigo, seeing Rukia Kuchiki in his bedroom, initially mistakes her for a burglar, but when Ichigo realizes only he can see the intruder, he accepts Rukia is a ghost. When he refuses to believe her explanation about Shinigami, Rukia binds him with Kidō. As a Hollow attacks the house, Ichigo, upon hearing his sister's pleas for help, breaks free and rushes to stop the Hollow.[65] Surprised at its monstrous appearance, Ichigo charges at it with a baseball bat in an attempt to release the captive Yuzu. Rukia frees Yuzu, but Ichigo's reckless actions force Rukia to shield him with her body, severely injuring her. At Orihime's apartment, Ichigo initially panics when he sees her soul separated from her body, but Rukia explains there is still time to save her.

Enderman Endermen are three-block-high mobs that spawn fairly uncommonly in the Overworld at light levels of 7 or less, and they densely populate The End. Endermen are neutral, but they will turn hostile when provoked. They are known for their spooky presentation, their unique abilities to pick up blocks and teleport, their vulnerability to water, and the odd noises they make. Endermen are the main source of Ender Pearls (the only other being stronghold chests), which are useful both in their own right and as a crafting ingredient for Eyes of Ender, which are necessary to reach The End. Endermen can be provoked via an attack or by simply looking at them (placing the crosshairs on their upper bodies from up to 64 blocks away).