Amchoor. Amchoor or aamchur, also referred to as mango powder, is a fruity spice powder made from dried unripe green mangoes and is used as a citrusy seasoning. 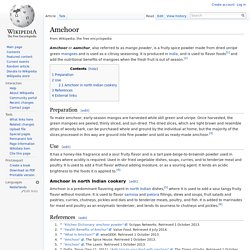 Asafoetida. Asafoetida /æsəˈfɛtɨdə/[1] is the dried latex (gum oleoresin) exuded from the rhizome or tap root of several species of Ferula, a perennial herb that grows 1 to 1.5 m (3–5 ft) tall. 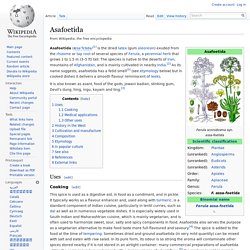 Basil. There are many varieties of Ocimum basilicum, as well as several related species or species hybrids also called basil. 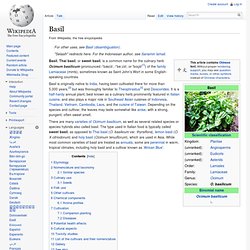 The type used in Italian food is typically called sweet basil, as opposed to Thai basil (O. basilicum var. thyrsiflora), lemon basil (O. X citriodorum) and holy basil (Ocimum tenuiflorum), which are used in Asia. While most common varieties of basil are treated as annuals, some are perennial in warm, tropical climates, including holy basil and a cultivar known as 'African Blue'.

Etymology[edit] The word basil come from the Greek βασιλεύς (basileus), meaning "king",[4] as it has come to be associated with the Feast of the Cross commemorating the finding of the True Cross by St Helena mother of the emperor St. Nomenclature and taxonomy[edit] Most commercially available basils are cultivars of sweet basil. Fenugreek. Fenugreek (/ˈfɛnjʉɡriːk/; Trigonella foenum-graecum) is an annual plant in the family Fabaceae, with leaves consisting of three small obovate to oblong leaflets. 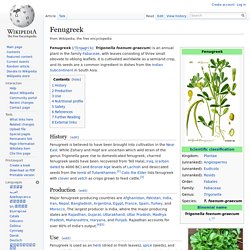 It is cultivated worldwide as a semiarid crop, and its seeds are a common ingredient in dishes from the Indian Subcontinent in South Asia. History[edit] Fenugreek is believed to have been brought into cultivation in the Near East. While Zohary and Hopf are uncertain which wild strain of the genus Trigonella gave rise to domesticated fenugreek, charred fenugreek seeds have been recovered from Tell Halal, Iraq, (carbon dated to 4000 BC) and Bronze Age levels of Lachish and desiccated seeds from the tomb of Tutankhamen.[2] Cato the Elder lists fenugreek with clover and vetch as crops grown to feed cattle.[3]

Kala Namak. Whole Kala Namak salt crystals Production[edit] The raw material for producing kala namak was originally obtained from natural halite from mines in Bangladesh, India, Nepal and Pakistan in certain locations of the Himalayas salt ranges,[3][4] or from salt harvested from the North Indian salt lakes of Sambhar or Didwana and Mustang of Nepal[5] Although the kala namak can be produced from natural salts with the required compounds, it is common to now manufacture it synthetically. 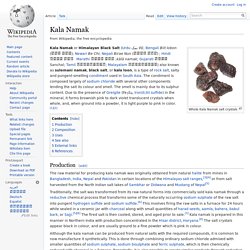 This is done through combining ordinary sodium chloride admixed with smaller quantities of sodium sulphate, sodium bisulphate and ferric sulphate, which is then chemically reduced with charcoal in a furnace. Masterwort (Peucedanum Ostruthium) This article is about the plant species Peucedanum ostruthium. 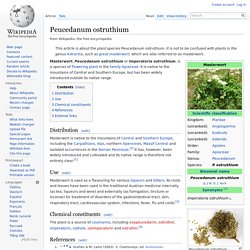 Oregano. Oregano (US /əˈrɛɡənoʊ/ or UK /ɒrɨˈɡɑːnoʊ/, scientific name Origanum vulgare) is a common species of Origanum, a genus of the mint family (Lamiaceae). 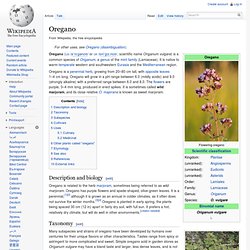 It is native to warm-temperate western and southwestern Eurasia and the Mediterranean region. Oregano is a perennial herb, growing from 20–80 cm tall, with opposite leaves 1–4 cm long. Oregano will grow in a pH range between 6.0 (mildly acidic) and 9.0 (strongly alkaline) with a preferred range between 6.0 and 8.0. The flowers are purple, 3–4 mm long, produced in erect spikes. Rosemary. Rosmarinus officinalis, commonly known as rosemary, is a woody, perennial herb with fragrant, evergreen, needle-like leaves and white, pink, purple, or blue flowers, native to the Mediterranean region. 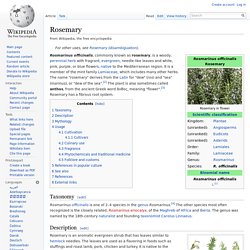 It is a member of the mint family Lamiaceae, which includes many other herbs. The name "rosemary" derives from the Latin for "dew" (ros) and "sea" (marinus), or "dew of the sea".[2] The plant is also sometimes called anthos, from the ancient Greek word ἄνθος, meaning "flower".[3] Rosemary has a fibrous root system. Taxonomy[edit] Rosmarinus officinalis is one of 2–4 species in the genus Rosmarinus.[4] The other species most often recognized is the closely related, Rosmarinus eriocalyx, of the Maghreb of Africa and Iberia. The genus was named by the 18th-century naturalist and founding taxonomist Carolus Linnaeus. 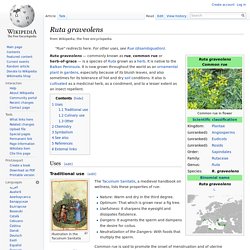 It is native to the Balkan Peninsula. Thyme. A bundle of thyme Flowering thyme History[edit] Ancient Egyptians used thyme for embalming. 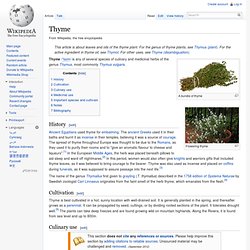 The ancient Greeks used it in their baths and burnt it as incense in their temples, believing it was a source of courage. The spread of thyme throughout Europe was thought to be due to the Romans, as they used it to purify their rooms and to "give an aromatic flavour to cheese and liqueurs".[1] In the European Middle Ages, the herb was placed beneath pillows to aid sleep and ward off nightmares.[2] In this period, women would also often give knights and warriors gifts that included thyme leaves, as it was believed to bring courage to the bearer.