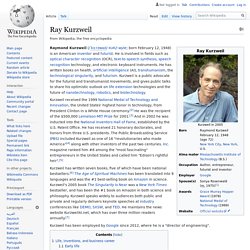 He is involved in fields such as optical character recognition (OCR), text-to-speech synthesis, speech recognition technology, and electronic keyboard instruments. He has written books on health, artificial intelligence (AI), transhumanism, the technological singularity, and futurism. Kurzweil is a public advocate for the futurist and transhumanist movements, and gives public talks to share his optimistic outlook on life extension technologies and the future of nanotechnology, robotics, and biotechnology. Kurzweil has been employed by Google since 2012, where he is a "director of engineering". Life, inventions, and business career[edit] Early life[edit] Kurzweil grew up in the New York City borough of Queens. Kurzweil attended Martin Van Buren High School.

Mid-life[edit] While in high school, Kurzweil had corresponded with Marvin Minsky and was invited to visit him at MIT, which he did. Books[edit] Epic Cycle. The Epic Cycle (Greek: Ἐπικὸς Κύκλος, Epikos Kyklos) was a collection of Ancient Greek epic poems, composed in dactylic hexameter and related to the story of the Trojan War, including the Cypria, the Aethiopis, the so-called Little Iliad, the Iliupersis, the Nostoi, and the Telegony. 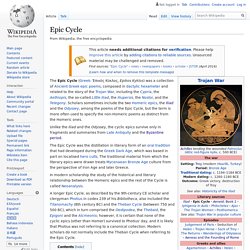 Scholars sometimes include the two Homeric epics, the Iliad and the Odyssey, among the poems of the Epic Cycle, but the term is more often used to specify the non-Homeric poems as distinct from the Homeric ones. Unlike the Iliad and the Odyssey, the cyclic epics survive only in fragments and summaries from Late Antiquity and the Byzantine period. The Epic Cycle was the distillation in literary form of an oral tradition that had developed during the Greek Dark Age, which was based in part on localised hero cults. The traditional material from which the literary epics were drawn treats Mycenaean Bronze Age culture from the perspective of Iron Age and later Greece. Contents[edit] Evidence[edit] 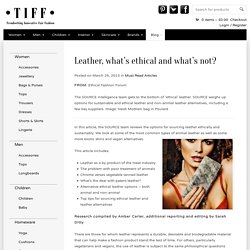 SOURCE weighs up options for sustainable and ethical leather and non-animal leather alternatives, including a few key suppliers. Image: Heidi Mottram bag in Poulard In this article, the SOURCE team reviews the options for sourcing leather ethically and sustainably. We look at some of the most common types of animal leather as well as some more exotic skins and vegan alternatives. This article includes: Leather as a by-product of the meat industryThe problem with poor treatment of animalsChrome verses vegetable tanned leatherWhat’s the deal with patent leather? Research compiled by Amber Carter, additional reporting and editing by Sarah Ditty There are those for whom leather represents a durable, desirable and biodegradable material that can help make a fashion product stand the test of time.

However, this brings into question how the animal was treated before its hide is used as leather. Emilie Wapnick: Why some of us don't have one true calling. Jim Chamberlin. James A. 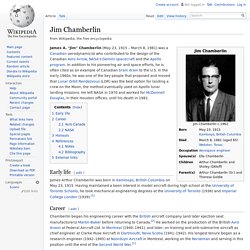 "Jim" Chamberlin (May 23, 1915 – March 8, 1981) was a Canadian aerodynamicist who contributed to the design of the Canadian Avro Arrow, NASA's Gemini spacecraft and the Apollo program. In addition to his pioneering air and space efforts, he is often cited as an example of Canadian brain drain to the U.S. In the early 1960s, he was one of the key people that proposed and moved that Lunar Orbit Rendezvous (LOR) was the best option for landing a crew on the Moon, the method eventually used on Apollo lunar landing missions. He left NASA in 1970 and worked for McDonnell Douglas, in their Houston offices, until his death in 1981. Early life[edit] James Arthur Chamberlin was born in Kamloops, British Columbia on May 23, 1915. Career[edit] Avro Canada[edit] Carbon Fiber Instruments. The Sharpest Knife: Rockwell Scale Hardness of Knives. It seems a lot of importance and confusion has been given to this topic recently. 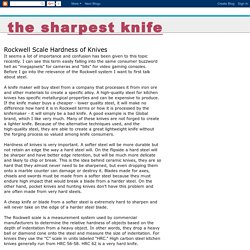 I can see this term easily falling into the same consumer buzzword hell as “megapixels” for cameras and “bits” for video gaming consoles. Before I go into the relevance of the Rockwell system I want to first talk about steel. A knife maker will buy steel from a company that processes it from iron ore and other materials to create a specific alloy. A high-quality steel for kitchen knives has specific metallurgical properties and can be expensive to produce. If the knife maker buys a cheaper - lower quality steel, it will make no difference how hard it is in Rockwell terms or how it is processed by the knifemaker - it will simply be a bad knife. Hardness of knives is very important. A cheap knife or blade from a softer steel is extremely hard to sharpen and will never take on the edge of a harder steel blade. Initially I spent a great deal of time comparing Rockwell ratings for different brands.

Related:  Our final invention   -  Intro to Genetics DNA Structure and Function   -  Zone confort - Développement Personnelle   -  Calling   -  Emilie Wapnick: Why some of us don't have one true calling   -  Education   -  Enterprise