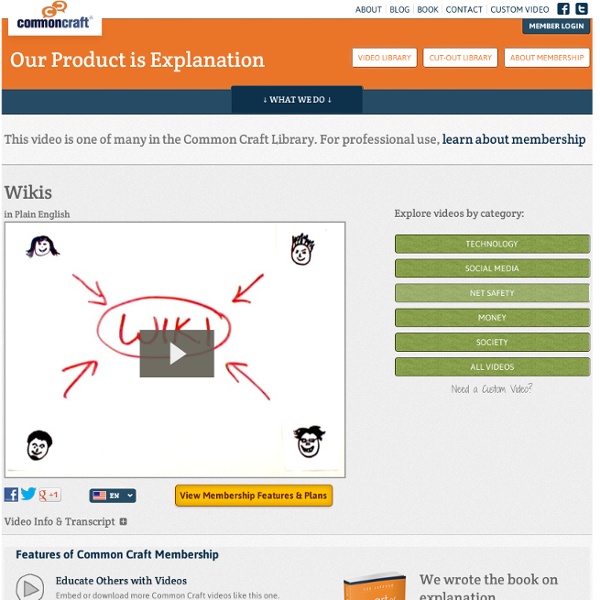 These four friends are going on a camping trip. They need to bring the right supplies because they're backpacking. The group needs to plan and plan well, so coordination is key. They're all computer users, so they start planning with an email. It's start with one, but then becomes a barrage. Email is not good at coordinating and organizing a group's input. The important information is scattered across everyone's inbox. There is a better way. Most wikis work the same. The buttons are really important. Here are our camping friends and here is a wiki website. Once you're finished editing, you click save and the document becomes a webpage once again, and is ready for the next person to edit it - easy! Edit - Write - and Save. Mary signs up for a wiki site and then sees the new site for the first time. Now it's John's turn. Henry visits the wiki, clicks edit and he can edit the page. Frank saves the page and realizes something awesome. But wait!

Project Based Learning You remember what it was like in school. IT WAS BORING! You sat in class, memorized as much as you could and tried to pass a test at the end. But is that good enough? These days school can be more interesting and effective by focusing students on work that matters. Most adults live in a world of projects. Let’s take a look at this Project Based World. Claire came out of the project looking like a rock star and she learned a lot about green products. The world needs more Claires. The answer is Project Based Learning or PBL. Here’s what I mean. Mr. After dividing the class into teams, he got them started on the project. The project teams showed off their final work to an enthusiastic audience of parents and their children at a nearby elementary school. His students practiced critical thinking, collaboration and communication. I'm Lee LeFever, and this has been Project Based Learning Explained by Common Craft.

Portaportal Watching #flipclass videos: F.I.T.C.H. I made a short video for next year's students on how to get the most out of a "Flip Class" video. For their summer packet this year, they are going to be doing some "flip class-y" things... rather than just being given a packet of review problems to do, they are going to be given that packet, have videos to go along with each lesson, and then submit a reflection similar to a WSQ online. I'm hoping this will help ease my students in to next year's class. We will have six sections of Math Analysis in the fall, split between me and another teacher. You can see what I have set up for them at my student site (still under construction for next year) - kirchmathanalysis.blogspot.com You can see the letter that explains what I am having them do here. I decided to come up with an acronym (I love acronyms!) F - Focused, Serious Attitude. I - Involved in the process.

Wikispaces Edmodo Scavenger Hunt Video Playlist I finally decided to do something that I been putting off for too long - finishing my scavenger hunt videos (I only had three left to record, and it took me less than 5 minutes - shesh) and adding the last 8 mini-videos to my MentorMob playlist. So I did it today! I decided to do an edmodo scavenger hunt because some of my students will be familiar with edmodo (because I had them last year and we used it) and some of my students have most likely never heard of it (Some of my students last year did talk about it to students who weren't in my class). I decided to break the scavenger hunt into steps (18 to be exact) and include a checklist on paper so my students could check it off as they go and get a visual of their progress. Most of the videos are under 2 minutes (Step 12 or 13- can't remember which - is 5 minutes). Create your own Playlist on MentorMob! On a side note, I love mentor mob. I'm going to be working on Unit C - Pronouns and continuing to create my flipped class units.