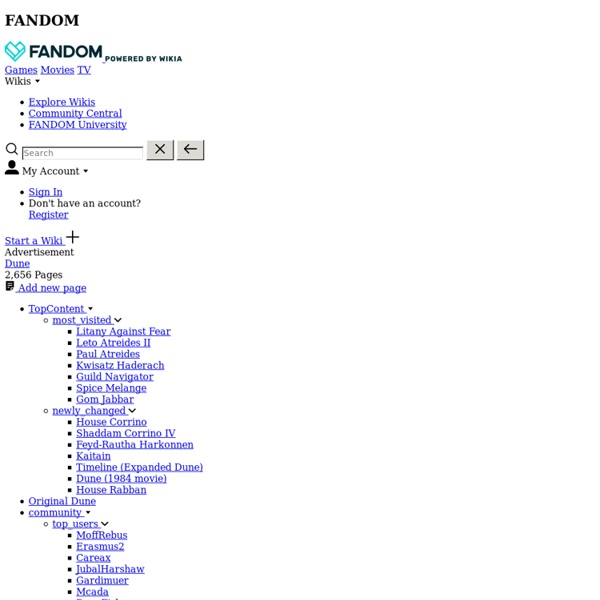 Arnor Arnor, i.e. the Northern Kingdom, was a kingdom of the Dúnedain in the land of Eriador in Middle-earth. The name probably means "Land of the King", from Sindarin Ara- (high, kingly) + (n)dor (land). History Edit It was founded at the end of the Second Age (SA 3320) by Elendil, whose sons founded Gondor at the same time. Star Wars Origins - Frank Herbert's Dune Origins Frank Herbert (1920-1986) was an unusually bright boy who grew up with sporadically alcoholic parents during the Great Depression. He spent a lot of time alone, out exploring nature or swept away by "love affairs" with authors including Ezra Pound, Guy De Maupassant, Marcel Proust and Ernest Hemingway. On his eighth birthday Herbert announced his intention to be a writer when he grew up.

The Oracle of Bacon Hopefully, you've played around a bit with The Oracle of Bacon and discovered how few steps are necessary to link just about anybody who has ever been in a movie to Kevin Bacon, but could there be some actor or actress who is even closer to the center of the Hollywood universe? The answer turns out to be: yes. By processing all of the 2.6 million people in the Internet Movie Database I discovered that there are currently 369 people who are better centers than Kevin Bacon! What does it mean for one person to be a "better" center than another?

Leviathan - Leviathans Wiki Origin Edit The word Leviathan in modern parlance is used to describe lighter than air vessels that acheive lift through the use of electroid, though the word is primarily used in English speaking countries. The original usage of the word 'Leviathan' dates back to the Old Testament of the Bible, where the Leviathan is a terrible sea monster of enormous size. The monster in the seas to the modern Leviathans' depiction as the monsters in the skies.

Peacekeepers "Most of the Peacekeepers turn a blind eye to the few of us who hunt because they're as hungry for fresh meat as anybody is." ―Katniss Everdeen about the District 12 Peacekeepers[src] The Peacekeepers comprise a gendarmerie which is controlled by the Capitol, and tasked with maintaining order throughout the nation of Panem. They essentially act as the government's internal security force in the various districts, led by a "Head Peacekeeper" who is the commander of the local garrison. They ensure that the Capitol's laws are obeyed, and punish those who break them. The Secret Invasion - Crimson Skies Wiki - a Wikia Gaming wiki Thanks to that cipher machine you retrieved from the Balmoral, you now know the secret British base in the Hawaiian archipelago, and a recon flight reveals a complete establishment with a zeppelin repair dock, officer's headquarters and a labour camp that forces prisoners to work on an airstrip construction. Big John (who is African-American) is rightfully outraged when he hears that... Plot thickens when Zachary explains that King George wants to expand his chain of naval bases ranging from Singapore to Japan, and from here they are gonna spread their imperialistic influence. This is the videogame's effort to emphasize on FASA's tabletop game political depth for the fans, although the Fortune Hunters are only planning this invasion to plunder the base's Zep gear...

Forge World - Warhammer 40K Wiki - Space Marines, Chaos, planets, and more A Forge World is the Imperial term for the numerous planets that are directly controlled by the Adeptus Mechanicus. All have in common a complete dedication to the manufacture of the various machines and devices of the Imperium, the pursuit of and preservation of (ancient) scientific and technical knowledge and the worship of the Machine God. Because of the Adeptus Mechanicus' monopoly on technical knowledge and expertise in Imperial culture, the Forge Worlds are the Imperium's primary source of all kinds of hardware: from farming equipment to war machines such as starships, tanks, aerospace fighters, or even Titans.

Slaypire - Buffy the Vampire Slayer and Angel Wiki "A creature like you cannot be allowed to survive." ―D'Hoffryn[src] A "slaypire" was the result of a Slayer being turned into a vampire. Characteristics and Traits Slaypires went through the same psychological and physiological changes as regular humans did, retaining their memories but becoming undead and soulless. Jared Booth - Bones Wiki Jared Booth Occupation Military Intelligence Affiliation United States of America Family Chapter A Chapter is a self-contained Space Marine army usually made up of a thousand or so Space Marines, as well as a large number of administrative and functionary personnel. The Adeptus Astartes is divided into roughly a thousand Chapters. Each constituent Chapter is autonomous and constitutes a complete army, with its own leadership, support and administrative staff, reliant only on its own Chapter members.

Nebuchadnezzar - Matrix Wiki - Neo, Trinity, Wachowski Brothers "I dreamed a dream...but now that dream is gone from me." ―Morpheus, quoting the biblical King Nebuchadnezzar. [src] The Nebuchadnezzar,[1] nicknamed the Neb, is the main hovercraft featured in the The Matrix and The Matrix Reloaded; it is used by the main characters Morpheus, Neo, and Trinity. History