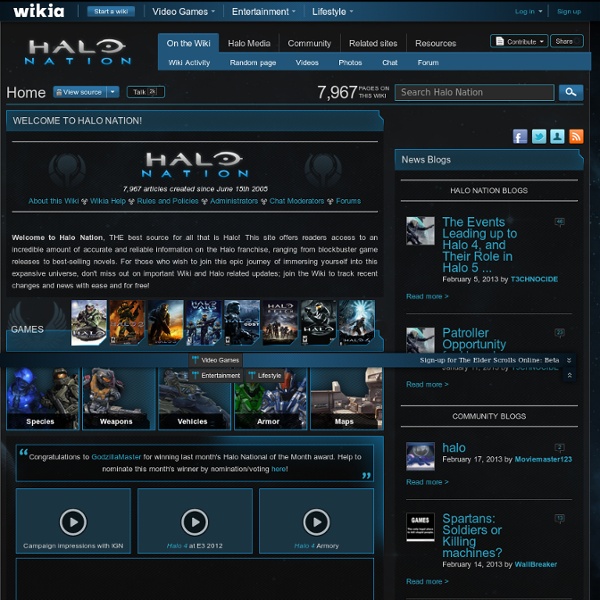 StarCraft Wiki New Alternate Reality Game Halo 4 Related? One of the biggest announcements during Microsoft’s press conference during E3 2011 was Halo 4. The announcement of the game was a surprise to all but what was even more surprising was that Microsoft and 343 Industries are starting a new Halo trilogy. Halo will always be the franchise that receives the most hype and some give that credit to the world wide success of Bungie and their fine tuning of the Halo franchise. It was not only the gameplay that added to the Halo experience, but the Alternate Reality Games that preceded some of the title. ILoveBees.com (ILB) and 42 Entertainment were the most known and really caused a stir in the industry and amongst gamers. Much like the viral marketing for Halo 2, ILB has started another A.I. countdown which might be for Halo 4. Upon further investigation, BlastMagazine has stumbled across another website that could also be related to the same Halo 4 phenomenon. That’s all the information we have on the matter so far.

The Vault, the Fallout wiki - Fallout: New Vegas and more the free encyclopedia Is “Mission Ice Fly” tied to Halo 4? A new website known as Mission Icefly has popped up on the internet, looking for test subjects, and if the rumors are true — it’s got something to do with Halo 4. The site, which features a rather lengthy warning, along with a spot to sign in and take a pretty psychedelic questionnaire popped up recently and has everyone guessing just what it could be. Here’s where things get interesting. The site is reportedly registered to the same team who created the iheartbees.com alternate reality game for Halo 3. A rumor also suggests that select people were given motorized ice flies at the Microsoft press conference at this year’s E3. The site has also been updated with a number of US Cities. So, what do you we know for sure? (Thanks Zac)

Main Page - Paragon Wiki Wookieepedia, the Star Wars Wiki Master Chief: A Visual History of Halo's Hero - Xbox360 Feature at IGN The mysterious, armor-clad hero of the human race is not quite human himself: As part of the Spartan program, Halo's Master Chief, aka John-117, was genetically engineered and reared by the military to become the xenocidal savior of everything. Master Chief is a hulking pile of future man, with a penchant for one-liners and a steady hand; he could probably blow up the Death Star by driving a Warthog up to the exhaust port and tossing a plasma grenade into it, no "Force" required. We're not aiming for a comprehensive history of Halo in these pages. Halo (Unreleased, Mac / PC) In 1999, Steve Jobs announced Halo at Macworld as the successor to Bungie's Myth games. Halo: Combat Evolved (2001, Xbox) Master Chief officially debuted in Halo: Combat Evolved. In Halo 2, the changes to Master Chief's trademark green getup weren't purely cosmetic.