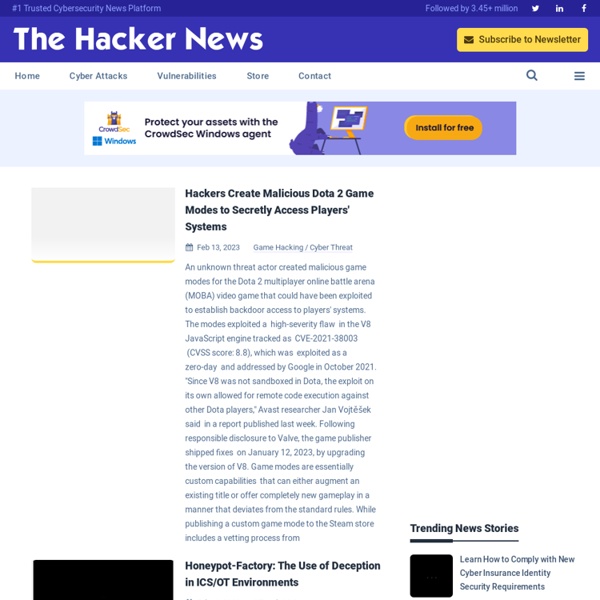 How To Crack A Wi-Fi Network's WPA Password With Reaver Your Wi-Fi network is your convenient wireless gateway to the internet, and since you’re not keen on sharing your connection with any old hooligan who happens to be walking past your home, you secure your network with a password, right? Knowing, as you might, how easy it is to crack a WEP password, you probably secure your network using the more bulletproof WPA security protocol. Here’s the bad news: A new, free, open-source tool called Reaver exploits a security hole in wireless routers and can crack most routers’ current passwords with relative ease. Here’s how to crack a WPA or WPA2 password, step by step, with Reaver — and how to protect your network against Reaver attacks. In the first section of this post, I’ll walk through the steps required to crack a WPA password using Reaver.

IntroX86 Creator: Xeno Kovah @XenoKovah License: Creative Commons: Attribution, Share-Alike ( Class Prerequisites: Must have a basic understanding of the C programming language, as this class will show how C code corresponds to assembly code. Lab Requirements: Requires a Windows system with Visual C++ Express Edition. Requires a Linux system with gcc and gdb, and the CMU binary bomb installed (use the one below, that link now holds the 64 bit version and this is the 32 bit class).

Test Your Router - RouterSecurity.org Level setting: While connected to a VPN, these tests test the VPN server, not your router. Same for Tor. Also, may ISPs hand out devices that serve as both modems and routers. How To Set Up An Open Mesh Network in Your Neighborhood Mesh networks can share web connections throughout a neighborhood, spreading the reach of a broadband connection. They're an excellent way to improve a community’s web access, and could also serve a role in the infrastructure for the Next Net that Douglas Rushkoff envisions. Open Mesh is a company that offers mesh network solutions for businesses and communities. They provided Shareable with this guide to how to set up a mesh network in your own neighborhood.

Ethical Hacker Network "Ethical hacking" is the process of entering into a hacker's mindset in order to spot system vulnerabilities by performing typical hacks in a controlled environment. This book helps security professionals understand how malicious users think and work, enabling administrators to defend their systems against attacks and to identify security vulnerabilities. This is yet another great introduction to a topic for the Dummies Series. Chapter 1 – Ethical Hacking In This Chapter Hands-on: hacking WiFi Protected Setup with Reaver WiFi hacking has long been a favorite pastime of hackers, penetration testers, and people too cheap to pay for their own Internet connection. And there are plenty of targets out there for would-be hackers and war drivers to go after—just launch a WiFi scanner app in any residential neighborhood or office complex, and you're bound to find an access point that's either wide open or protected by weak encryption. Fortunately (or unfortunately, if you're the one looking for free WiFi), those more blatant security holes are going away through attrition as people upgrade to newer routers or network administrators hunt down vulnerabilities and stomp them out. But as one door closes, another opens.