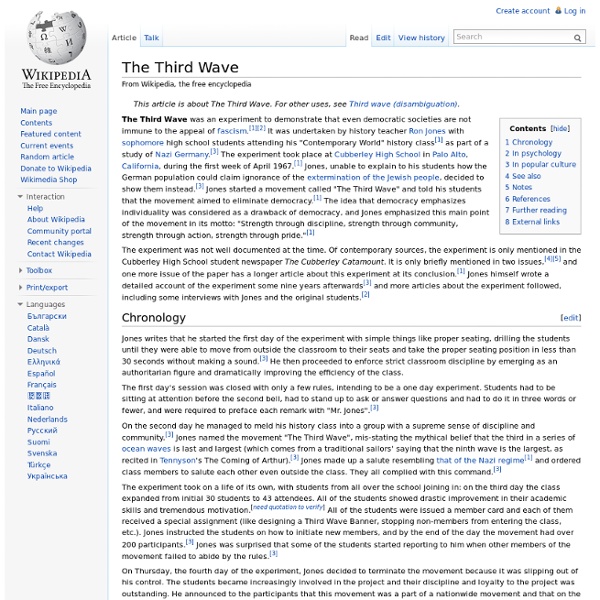 Background to the Third Wave experiment[edit] The experiment took place at Cubberley High School in Palo Alto, California, during the first week of April 1967.[1] Jones, finding himself unable to explain to his students how the German population could have claimed ignorance of the extermination of the Jewish people, decided to demonstrate it to them instead.[3] Jones started a movement called "The Third Wave" and told his students that the movement aimed to eliminate democracy.[1] The idea that democracy emphasizes individuality was considered as a drawback of democracy, and Jones emphasized this main point of the movement in its motto: "Strength through discipline, strength through community, strength through action, strength through pride."[1] The experiment was not well documented at the time. Chronology[edit] First day[edit] The first day's session was closed with only a few rules, intending to be a one day experiment. Second day[edit] Third day[edit] Fourth day[edit] In psychology[edit]

12 Things That The Mainstream Media Is Being Strangely Quiet About Right Now As the mainstream media continues to be obsessed with Anthony Weiner and his bizarre adventures on Twitter, much more serious events are happening around the world that are getting very little attention. In America today, if the mainstream media does not cover something it is almost as if it never happened. Right now, the worst nuclear disaster in human history continues to unfold in Japan , U.S. nuclear facilities are being threatened by flood waters, the U.S. military is bombing Yemen, gigantic cracks in the earth are appearing all over the globe and the largest wildfire in Arizona history is causing immense devastation. But Anthony Weiner, Bristol Palin and Miss USA are what the mainstream media want to tell us about and most Americans are buying it. In times like these, it is more important than ever to think for ourselves. That is why more Americans than ever are turning to the alternative media. Back on June 7th, there was a fire at Fort Calhoun. Nobody is quite sure yet.

Mikeeb > Blog > New Ultimate Marvel vs. Capcom 3 - High-res Character Art We've had a number of Unity members requesting art from the Ultimate Marvel vs. Capcom 3 campaign on the 'Ask Capcom' board as of recent. You may not have known, but the dev team actually recreated character art for every single one of the characters in the game, not just new 12 'Ultimate' newcomers. Well ask and ye shall receive! Today I've got all 51 characters (even Galactus, how fancy) in all their high-res glory. I expect to see these in fan created art, plastered all over your custom sticks, and maybe even something rad like Doc-Doom wallpaper! Hit the jump to find the a-la-carte menu and also for the link to download the whole batch at once or... Below are each the individual shots, enjoy! Akuma Amaterasu Arthur C. Chris Redfield Chun-Li Dante Felicia Firebrand Frank West Haggar Hsien-Ko Jill Valentine Morrigan Nemesis Phoenix Wright Ryu Spencer Strider Trish Tron Bonne Vergil Viewtiful Joe Wesker Zero [Edited By Moderator]

Quadrant Online - John Howard and the media Extract from Tom Switzer – “John Howard and the Media” published in The Howard Era (Quadrant Books): He was called a “fool” (Michael Leunig), an “unflusha­ble turd” (Mungo MacCallum), a “scheming, menda­cious little man” (Alan Ramsey), who silenced dis­sent (Clive Hamilton), corrupted the public debate (David Marr) and used right-wing religious activists to indoctrinate the nation (Marion Maddox). He was also “far and away the worst prime minister in living memory” (Phillip Adams) who had a “pre-fascist fetish to attack minorities” (Margo Kingston). Under his government, Australia headed towards an “increa­singly authoritarian trajectory of the political culture” (Robert Manne), became “a backwater, a racist and inward-looking country” (Greg Barns) and was “condemned at the court of world opinion as callous and inhumane” (Sun-Herald, Sydney). If any of these criticisms bothered John Winston Howard, he never let it show. Of course, such prejudice was hardly novel. Extract only.

The joy of English pronunciation If your browser does not display the IPA part of Unicode correctly, here is a PDF version of the same thing. The text Dearest creature in creation Studying English pronunciation, I will teach you in my verse Sounds like corpse, corps, horse and worse. I will keep you, Susy, busy, Make your head with heat grow dizzy; Tear in eye, your dress you'll tear; Queer, fair seer, hear my prayer. Pray, console your loving poet, Make my coat look new, dear, sew it! Just compare heart, hear and heard, Dies and diet, lord and word. Sword and sward, retain and Britain (Mind the latter how it's written). Now I surely will not plague you With such words as vague and ague, But be careful how you speak, Say: gush, bush, steak, streak, break, bleak, Previous, precious, fuchsia, via, Recipe, pipe, studding-sail, choir; Woven, oven, how and low, Script, receipt, shoe, poem, toe. Wholly, holly, signal, signing, Same, examining, but mining, Scholar, vicar, and cigar, Solar, mica, war and far. Suit, suite, ruin.

Supplement Store: Protein, Creatine & More! Fitness Clothing Dress the part – show off all your hard work in the gym with high quality fitness clothing designed for active individuals! tl;dr Literally, "Too long; didn't read" Said whenever a nerd makes a post that is too long to bother reading. "omg you postwench. i can only say one thing in response - tl;dr" "tl;dr...why dont you give up on your unabridged edition of War and Peace or at least stop posting it here?" The Urban Dictionary Mug Lotsa space for your liquids. Buy the mug Your favorite word on a white mug. Create a mug One side has the word, one side has the definition. The Urban Dictionary T-Shirt Soft and offensive. Buy the t-shirt Smooth, soft, slim fit American Apparel shirt. Too long ; Didn't read. Any over wordy thread or long drawn out story that people don't want to really read, but reply to anyway. Also a form of trolling or humorous reply telling some one to get to the point. Buy the mug Create a mug Buy the t-shirt Too Long; Didn't Read Literally translates to: That was too long to read. Now, instead of just dropping capitals the modern internet communicator also drops tiresome reading! Buy the mug Create a mug