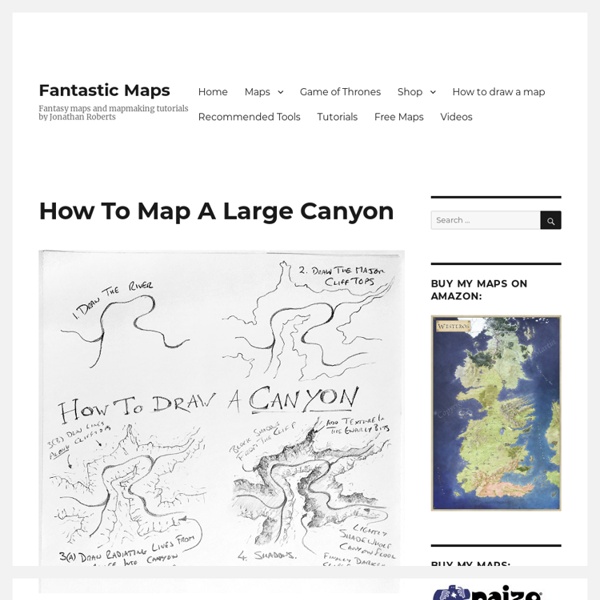 This is a quick one. After the Napa map (see below) I had some questions on how to draw mountains. This style is a little different to my previous maps, closer in style to a skiing map. I thought the easiest way to show the process was to create a short video walkthrough. Enjoy! Not all my maps are of fantasy lands – every now and again, one comes along from the real world.

The Simpsons: Interactive Map of Springfield Discover Springfield, where live the Simpsons family; Homer, Bart, Marge, Lisa and Maggie. Roll over the places to discover a picture of it. The map of Springfield is based on the Guide to Springfield USA We Wants It Some of the earliest full-on engagements I had with maps were those that were printed in the inside covers of books. But my sister’s Lord of the Rings volumes had huge folded inserts! Fantastic books need fantastic maps, and these unfolded a new world. This past weekend I spent some time revisiting this wonderful yellowed map of Middle Earth created by J.R.R. Jerry's Map: Drawing an Imaginary World for 50 Years with the Outcome Determined by a Deck of Cards It’s a video that went undiscovered on Vimeo for years, and a project that’s been evolving for decades… with no clear end in sight. Jerry Gretzinger has an obsession unlike anyone else we’ve heard of: he’s spent almost his entire adult years creating a single never-ending map using hand painted pages and a special deck of cards to determine the outcome for his imaginary populous. It’s an all encompassing personal project that greatly predates modern games like SimCity and Minecraft, and Jerry’s brilliant (some would say obsessed) mind is at the controls.

New exhibition of J.D. Salinger letters shows a young writer balancing cynicism and hope NEW YORK, NY.- Between 1941 and 1943 J. D. Salinger sent nine letters and postcards to Marjorie Sheard, an aspiring Canadian writer. This important collection of documents, acquired by the Morgan in April 2013, sheds light on Salinger’s writing, and the authors that influenced him in the early stages of his career. A highlight among the letters is one in which the young author writes to Ms.

Random Dungeon Generator Version .68 Refresh the page for a new design. See below the dungeon for more info. Inkwell Ideas' Other Projects: Thule In classical and medieval literature, ultima Thule (Latin "farthermost Thule") acquired a metaphorical meaning of any distant place located beyond the "borders of the known world".[5] By the Late Middle Ages and early modern period, the Greco-Roman Thule was often identified with the real Iceland or Greenland. Sometimes Ultima Thule was a Latin name for Greenland, when Thule was used for Iceland.[6] By the late 19th century, however, Thule was frequently identified with Norway.[7][8] In 1910, the explorer Knud Rasmussen established a missionary and trading post in north-western Greenland, which he named "Thule" (later Qaanaaq).

How to Design a Town Map Today a quick mini-tutorial. This isn’t a photoshop tutorial, nor is it a tutorial for a polished finished map. This is a step by step in my own town creation method when I’m creating the first sketch layout. www.howstuffworks.com/ad-slogan2.htm A perfectly-formed tagline should fulfill several criteria. First, it should be memorable. Memorability has to do with the ability the line has to be recalled unaided. A lot of this is based on the brand heritage and how much the line has been used over the years. 15 Maps That Will Give You A Better Idea Of Reality Posted Apr 23, by Val Liarikos The Most Common Surnames in Europe by Country Map of ‘Pangea’ with Current International Borders Where Google Street View is Available World Map of the Different Writing Systems