One Community - One Community is a nonprofit and for The Highest Good of All organization creating open source and free-shared blueprints for a global cooperative of sustainable communities, villages, and cities. 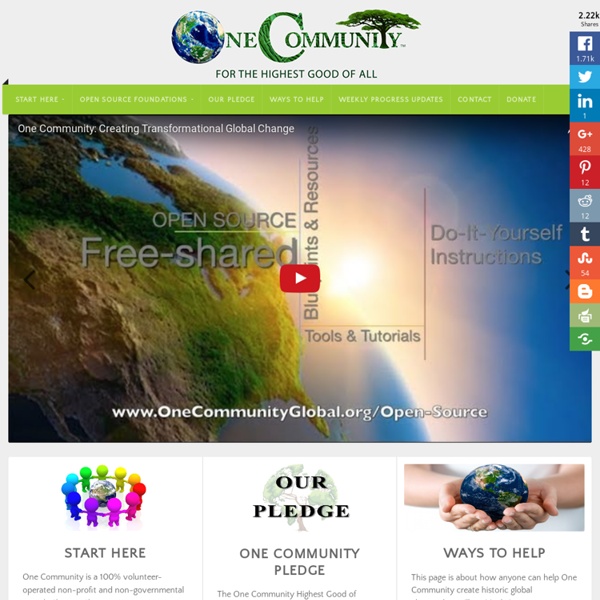 Architecture Student Bought a School Bus and Turned It Into Cozy Mobile Home As a graduate architecture student, Hank was tired of seeing architecture projects that never left the drawing board. So when it came time to come up with a final project, Hank did what was obviously the only logical solution – he bought an old school bus and, together with his brother and a friend, spent 14 weeks converting it into a modern, well-designed mobile home that can host up to 12 people complete with beds, a kitchen, a bathroom and two skylights. Most of the furniture in the bus is modular, so it can be moved, stowed away or converted to different functions. The queen-sized bed can be made into a seating or dining area, and most of these modular pieces of furniture also include storage space. The kitchen consists of a pump sink with plans for an on-board refrigerator and gas cook stove in the future.

About - we It’s been just three years since 3,000 people from all across Canada came together before the 2011 election and began building the Leadnow.ca campaigning community. By taking action through a wide range of campaigns – from the omnibus crime bill and budget bills, to the Canada-China FIPPA investors deal and the CBC takeover clause – our community has grown from a small youth-led team to include over 350,000 people across Canada. The Leadnow.ca community believes that as we come together to defend the things we care about, we can also help build the momentum this country needs to rise to the major challenges of our times. Over the last two years, thousands of people have participated in creating a people-powered campaign for the 2015 election. Now we need thousands more to be part of this. With the 2015 federal election around the corner, now is the time to build a movement that will defeat the Harper Conservatives and move Canada forward.

Physicists Are Close to Producing Metallic Hydrogen, And It Could Change Everything Hydrogen’s Mega-Evolution The simplest and most common element, first in the periodic table, shouldn’t be difficult to crack, right? “What could be more simple than an assembly of electrons and protons?” asks Neil Aschcroft, a theoretical physicist at Cornell University. Yet, its supposed metallic form is quite the opposite. About Us – Salemtown Board Co. ABOUT SAlemtown board co. Salemtown Board Co. was started in 2012 with a tank of gas, some reclaimed oak and a vintage wood shop outside of Bucksnort, TN. This story began with a dream to change our city, even just a little bit, through making beautiful, high quality skateboards.

How to Start a Cooperative This guide outlines the process of organizing and financing a cooperative business. Rather than being a complete handbook, this publication represents the most important elements to consider when forming a cooperative. It lists what special expertise is necessary, and where to look for help. Earlier versions of this publication emphasized working with groups of agricultural producers to develop markets and sources of supply for farm operators. This version has been broadened to also include nonfarm cooperative applications. the cooperative business structure, already shown to be successful in agriculture, also has been useful in helping others obtain desired benefits or provide needed services in areas like housing, utilities, finance, health care, child care, and small business support.

NATO: Who’s the Aggressor? (I) There has been much discussion recently of NATO in the mainstream and alternate media. Why was NATO founded in the first place and why did it expand so rapidly after the collapse and dismemberment of the USSR in 1991. According to widely held views in the west, NATO originated as a defensive alliance against an aggressive, menacing Soviet Union after World War II. There is nothing unusual about this post 1945 representation of the USSR. Western negative perceptions of Russia date back to the 19th century, if not earlier. After the October Revolution of 1917 western Russophobia was exacerbated by the Red Scare. Make A Cheap & Easy Solar USB Charger With An Altoids Tin Photos by Joshua Zimmerman The craftster behind the very popular $3 solar-powered emergency radio is back with a new awesome project: a cheap solar battery charger with a USB plug. Zimmerman wrote, saying that he saw a lot of small solar powered chargers being talked about over Earth Day, but there was a big problem: "They're all quite nice, but also quite expensive. I don't think I've seen any for less than $60, and I've not seen one that really suits my style." So, he came up with his own, using one of our favorite reusable items -- the ever wonderful Altoids tin.