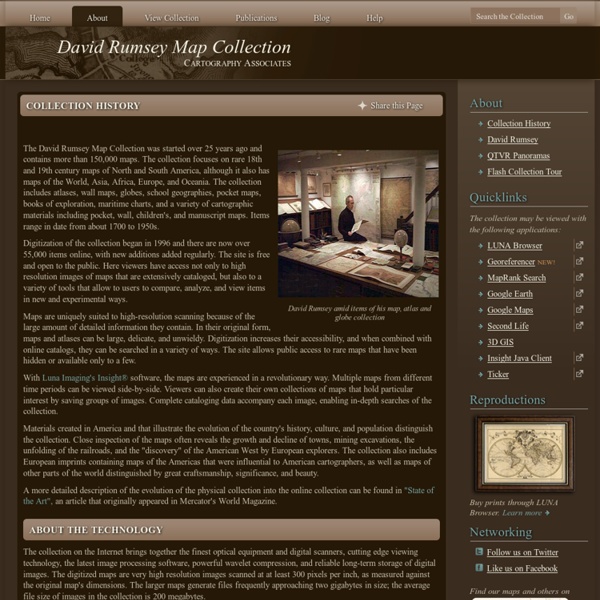 The David Rumsey Map Collection was started over 25 years ago and contains more than 150,000 maps. The collection focuses on rare 18th and 19th century maps of North and South America, although it also has maps of the World, Asia, Africa, Europe, and Oceania. The collection includes atlases, wall maps, globes, school geographies, pocket maps, books of exploration, maritime charts, and a variety of cartographic materials including pocket, wall, children's, and manuscript maps. Items range in date from about 1700 to 1950s. Digitization of the collection began in 1996 and there are now over 55,000 items online, with new additions added regularly. The site is free and open to the public. Maps are uniquely suited to high-resolution scanning because of the large amount of detailed information they contain. With Luna Imaging's Insight® software, the maps are experienced in a revolutionary way. about the technology Insight client/server and browser software by Luna Imaging, Inc.

7 Secrets of the Super Organized A few years ago, my life was a mess. So was my house, my desk, my mind. Then I learned, one by one, a few habits that got me completely organized. Am I perfect? Of course not, and I don’t aim to be. But I know where everything is, I know what I need to do today, I don’t forget things most of the time, and my house is uncluttered and relatively clean (well, as clean as you can get when you have toddlers and big kids running around). Expands xConsortium to Asia and Doubles in Size with Addition of 15 New Global Institutions EdX Expands xConsortium to Asia and Doubles in Size with Addition of 15 New Global Institutions CAMBRIDGE, MA – May 21, 2013 – EdX , the not-for-profit online learning initiative composed of the leading global institutions of the xConsortium, today announced another doubling of its university membership with the addition of its first Asian institutions and further expansion in the Ivy League. The xConsortium is gaining 15 prestigious higher education institutions, bringing its total to 27, including Tsinghua University and Peking University in China, The University of Hong Kong and Hong Kong University of Science & Technology in Hong Kong, Kyoto University in Japan, and Seoul National University in South Korea, and Cornell University in Ithaca, New York.

Education Technology - theory and practice: Pearltrees for teachers Year 2012 last post is a guest post from Finnish teacher Tommi Viljakainen. He is a teacher in Elimäki lower and upper secondary school. He teaches English, French and P.E. He is also interested in social media, iPad and the future of education.

The Science of "Chunking," Working Memory, and How Pattern Recognition Fuels Creativity by Maria Popova “Generating interesting connections between disparate subjects is what makes art so fascinating to create and to view… We are forced to contemplate a new, higher pattern that binds lower ones together.” It seems to be the season for fascinating meditations on consciousness, exploring such questions as what happens while we sleep, how complex cognition evolved, and why the world exists. Joining them and prior explorations of what it means to be human is The Ravenous Brain: How the New Science of Consciousness Explains Our Insatiable Search for Meaning (public library) by Cambridge neuroscientist Daniel Bor in which, among other things, he sheds light on how our species’ penchant for pattern-recognition is essential to consciousness and our entire experience of life. To illustrate the power of chunking, Bor gives an astounding example of how one man was able to use this mental mechanism in greatly expanding the capacity of his working memory.

What an Effective Teacher's Classroom Looks Like Another school year is approaching and many novice teachers are preparing to enter their own classrooms for the first time. To help them on their way, MiddleWeb is publishing a series of brief articles offering good advice and food for thought. What We See in Effective and Ineffective Classrooms by Annette Breaux and Todd Whitaker In our ongoing observations of teachers, we continue to notice that the most effective teachers’ classrooms all look uncannily similar. And, of course, the same can be said for the less effective teachers—their classrooms all look uncannily similar.

Discussion Forums - Tamgas or not? Extraneous motifs on weavings Posted by James Blanchard on 03-30-2006 12:44 PM: Yomut mafrash - eagle symbol? Hi all, Wikimédia CancelEditDeletePreviewrevert Text of the note (may include Wiki markup) Could not save your note (edit conflict or other problem). Please copy the text in the edit box below and insert it manually by editing this page. 50 Kick-Ass Websites You Need to Know About It's time to update the entries in your browser's links toolbar. But with recent estimates putting the size of the internet at well more than 100 million distinct websites, it's getting harder and harder to get a handle on all the great stuff that's out there. That's why we've compiled this list. And unlike some lists you may have seen, which try to name the very "best" websites, but end up just telling you a lot of stuff you already know, we've chosen instead to highlight 50 of our favorite sites that fly under most people's radar. Think of it as the Maximum PC blog roll (remember those?).

Margaret Wertheim – The limits of physics Theoretical physics is beset by a paradox that remains as mysterious today as it was a century ago: at the subatomic level things are simultaneously particles and waves. Like the duck-rabbit illusion first described in 1899 by the Polish-born American psychologist Joseph Jastrow, subatomic reality appears to us as two different categories of being. But there is another paradox in play. Blog Archive » The Web’s third frontier Everyone realizes that the web is entering a new phase in its development. One indication of this transition is the proliferation of attempts to explain the changes that are occurring. Functional explanations emphasize the real time web, collaborative systems and location-based services. Technical explanations argue that the interconnectivity of data is the most significant current development.

The Great App.net Mistake Dalton Caldwell. Photo: Alex Washburn/WIRED Before the great gold rush of venture capital and public offerings, there was an idea that the Internet should not just change the world, but actively make it a better place. Profit and empowerment, the voices said, should coexist. This idealism seems increasingly quaint — and to some extent, we pay for its death with things like the NSA’s PRISM surveillance program — but pockets of it remain. Change.org harkens back to a time when Internet services paid more than lip service to the notion of changing the world.

26 Life Changing Lessons to Learn from Mahatma Gandhi Mahatma Gandhi, one of the many beautiful souls that has inspired and continues to inspire so many of us taught me so many valuable and life changing lessons. And in today’s post, I have gathered some of his most inspiring quotes and compiled them into the 26 Life Changing Lessons to Learn from Mahatma Gandhi. Enjoy! 1. Community Time and the Nature of Reality By ZEEYA MERALI We recently ran an article (courtesy of Nautilus Magazine) in which physicist Paul Davies ran through some open questions about the nature of time. I want to alert you to another discussion currently taking place on the Big Questions Online... FQXb (bio) By WILLIAM OREM Everyone is talking this week about the dramatic confirmation of inflationary theory: those first-instant gravitational waves whose details may even point--being, if you will, quantum phenomena that went suddenly ultra-macroscopic--toward the correct... BICEP2: Primordial Gravitational Waves & Evidence...

What Makes a Parent Love a Teacher Guest post by Jennifer Gonzalez The note from Mrs. F. came home two weeks into the school year:I’d like to talk with you about how we can make reading time more challenging for Ruby. When can we meet?