12 things white people can do now because Ferguson 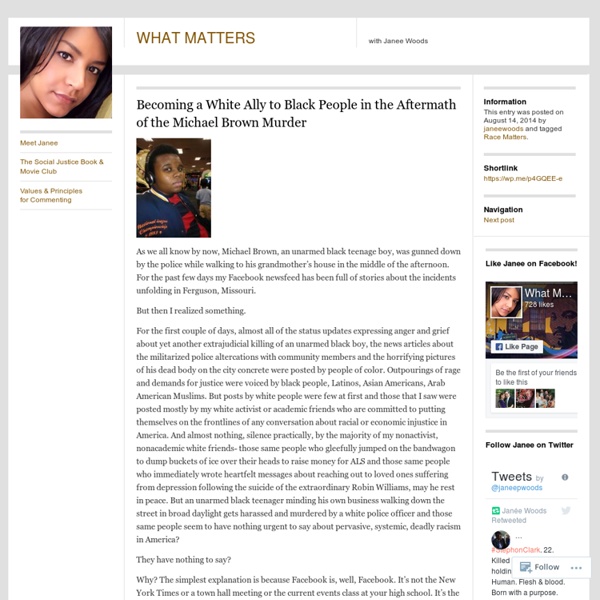 As we all know by now, Michael Brown, an unarmed black teenage boy, was gunned down by the police while walking to his grandmother’s house in the middle of the afternoon. For the past few days my Facebook newsfeed has been full of stories about the incidents unfolding in Ferguson, Missouri. But then I realized something. For the first couple of days, almost all of the status updates expressing anger and grief about yet another extrajudicial killing of an unarmed black boy, the news articles about the militarized police altercations with community members and the horrifying pictures of his dead body on the city concrete were posted by people of color. Outpourings of rage and demands for justice were voiced by black people, Latinos, Asian Americans, Arab American Muslims. They have nothing to say? Why? However, I think the explanation is more complex and mirrors the silence of many people that I witness in real life. 1. 2. 3. 4. 5. 6. 7. 8. 9. 10. 11. 12. People are literally dying.

40 Reasons Our Jails and Prisons Are Full of Black and Poor People The US Department of Justice (DOJ) reports 2.2 million people are in our nation’s jails and prisons and another 4.5 million people are on probation or parole in the US, totaling 6.8 million people, one of every 35 adults. We are far and away the world leader in putting our own people in jail. Most of the people inside are poor and Black. One. Two. Three. Four. Five. Six. Seven. Eight. Nine. Ten. Eleven. Twelve. Thirteen. Fourteen. Fifteen. Sixteen. Seventeen. Eighteen. Nineteen. Twenty. Twenty One. Twenty Two. Twenty Three. Twenty Four. Twenty Five. Twenty Six. Twenty Seven. Twenty Eight. Twenty Nine. Thirty. Thirty One. Thirty Two. Thirty Three. Thirty Four. Thirty Five. Thirty Six. Thirty Seven. Thirty Eight. Thirty Nine. Forty. What does it say about our society that it uses its jails and prisons as the primary detention facilities for poor and black and brown people who have been racially targeted and jail them with the mentally ill and chemically dependent?

A Gang of Rich, White Surfer Dudes Is Terrorizing a California Beach Town The Lunada Bay Boys are not your stereotypical LA gang. For one thing, they're in their 40s and 50s. They're white. They come from old money. They're also surfers, and according to the residents of their posh community, they've been assaulting outsiders with the tacit approval of the police for decades, keeping tight control over one of the most coveted surf spots in Southern California. The Bay Boys have been protecting their precious surf break since at least the 60s, by way of intimidation, threats, and even beatings. The ultra-rich claiming public beach property as their own is not a new thing in Southern California. Yes, the "Bay Boys" aren't exactly the Crips or MS-13—and there's certainly something deeply silly about rich grown-ups pretending to be Anthony Kiedis in Point Break. The Lunada Bay surf break. In many beach communities, local authorities tend to see localism-minded groups like the Bay Boys as an unfortunate but inevitable element of surf culture.

White Americans and racism: &apos;Now they&apos;re starting to listen&apos; After a year of high-profile police shootings of black Americans, many captured on video, racial attitudes among Americans -- particularly whites -- have undergone a significant shift. A majority of whites now say the country needs to do more to make equal rights a reality, and a significantly larger number of white Americans say that blacks are treated less fairly than others by law enforcement officials, according to several newly released polls. The share who say that racism is a "big problem" in the U.S. has grown significantly as well. Asked whether the country “needs to continue making changes to give blacks equal rights with whites” or whether it already has "made the changes needed," Americans by just short of 2-1 now say more change is needed, according to a new survey by the nonpartisan Pew Research Center. NEWSLETTER: Get the day's top headlines from Times Editor Davan Maharaj >> The shifts are significant. "Now they're starting to listen. @davidlauter @MattDPearce

Fox News's Megyn Kelly can't handle the truth about race and the justice system Fox News's Megyn Kelly is outraged that Baltimore City State's Attorney Marilyn Mosby, who's prosecuting the cops behind Freddie Gray's death, previously stated some basic facts about the criminal justice system. "The criminal justice system ... has historically and disproportionately affected so many communities of color, and what we're seeing right now when we turn on the news and we open up the newspaper is that frustration," Mosby said on April 28, according to Fox News. "So we will pursue justice by any and all means necessary." Kelly and her guest, former judge Andrew Napolitano, described Mosby's comments as politically motivated, alleging that she's prejudicing her case against the cops involved in Gray's death to run for higher office. But it's hard to see what's so outrageous about Mosby's comments. 1) Black people are disproportionately incarcerated 2) White and black Americans use and sell drugs, but black people are punished far more for it Joe Posner/Vox Chicago Sun-Times

The Surprising Brain Differences Between Democrats and Republicans It is still considered highly uncool to ascribe a person's political beliefs, even in part, to that person's biology: hormones, physiological responses, even brain structures and genes. And no wonder: Doing so raises all kinds of thorny, non-PC issues involving free will, determinism, toleration, and much else. There's just one problem: Published scientific research keeps going there, with ever increasing audacity (not to mention growing stacks of data). The past two weeks have seen not one but two studies published in scientific journals on the biological underpinnings of political ideology. First, in the American Journal of Political Science, a team of researchers including Peter Hatemi of Penn State University and Rose McDermott of Brown University studied the relationship between our deep-seated tendencies to experience fear—tendencies that vary from person to person, partly for reasons that seem rooted in our genes—and our political beliefs. So what's the upshot?

DEA Agent Speaks Out: We Were Told Not To Enforce Drug Laws In Rich Communities “‘You know, if we go out there and start messing with those folks, they know judges, they know lawyers, they know politicians. You start locking their kids up; somebody’s going to jerk our chain.’ He said, ‘they’re going to call us on it, and before you know it, they’re going to shut us down, and there goes your overtime.’” Washington DC – As the lies that keep the drug war alive begin to come unglued, many of the police officers and government agents who made it possible are now going public with the truth of their experience. Matthew Fogg, a former US Marshal, and DEA agent is one of those people. Ever since leaving law enforcement he has been speaking out against police brutality, profiling, and the drug war. Fogg appeared in an interview for Brave New Films, where he discussed the drug war and how race and class play a part the enforcement of drug laws. “We were jumping on guys in the middle of the night, all of that. “What I began to see is that the drug war is totally about race.

Review: &apos;The Making of Asian America&apos; is a stirring chronicle long overdue Asian Americans are the fastest-growing minority population in the United States. They have been living in this country in significant numbers since Chinese immigrants came hunting for gold in the middle of the 19th century. But even before then, Asians migrated to the Americas, beginning in the 1500s, as slaves, sailors, merchants, explorers and adventurers. Asian migrants have come to the Americas from many different countries, spoken dozens of languages, identified themselves across a wide range of ethnicities and religions, and intermarried with each other and with people of other backgrounds. Some have succeeded, and some have failed; some have stayed, and some have left. There is no one way to define or identify a population as complex as what we have come to call "Asian Americans," and yet in the popular American imagination, Asian Americans tend to be seen in simple ways. SIGN UP for the free Essential Arts & Culture newsletter >> The Making of Asian America: A History

7 Things Truth Seekers Need Stop Doing - Bernard Alvarez The globalist plan to control humanity is rolling forward at superhighway speed as our battle for humanity rages on. So let’s ask the question, what can we do as truth seekers to improve our odds of success against this global cabal of control and oppression? Is there anything worth throwing on the table for truth seekers to consider that could actually act as a game-changer in this battle for truth, freedom, and consciousness? 1 – Stop labeling everyone who doesn’t agree with you on every single issue, as “controlled opposition” I now hear it all the time. We all know that the trolls and shills that regularly appear on mainstream media are ALL by definition controlled opposition, but what about the person that is doing a lot of work to expose evil and state crimes against humanity? It’s a tough topic and understandably every case is unique. 2 – Stop pushing only doom and gloom and start focusing on solutions Some truth seekers only talk about how bad things are. More from Activistpost

Discrimination during adolescence has lasting effect on body: Decades of unjust treatment impacts stress hormone levels, researchers find -- ScienceDaily In both blacks and whites, everyday feelings of discrimination can mess with the body's levels of the primary stress hormone, cortisol, new research suggests. In African-Americans, however, the negative effects of perceived discrimination on cortisol are stronger than in whites, according to the study, one of the first to look at the biological response to the cumulative impact of prejudicial treatment. The team of researchers, led by Northwestern University, also found that the teenage years are a particularly sensitive period to be experiencing discrimination, in terms of the future impact on adult cortisol levels. "We found cumulative experiences matter and that discrimination mattered more for blacks," said study lead author Emma Adam, a developmental psychologist at Northwestern's School of Education and Social Policy. "We saw a flattening of cortisol levels for both blacks and whites, but blacks also had an overall drop in levels.

Ore. Police Officer Who Turned in Chief for Racist Comments Says He’s Received Death Threats Officer Dustin Alex Stone An Oregon police officer who outed his chief for making racist remarks in response to a black woman’s complaints is now claiming that he and his family are fearful for their lives, Agence France-Presse reports. Clatskanie, Ore., Police Officer Dustin Alex Stone says that he has received death threats from the community and has been racially abused since he and fellow Officer Zack Gibson filed a complaint against their chief, Marvin Hoover, earlier this year. “Just yesterday, one of the local business owners said he wanted to take me into the woods and shoot me in the head. “My wife got run off the road twice ... and my three children are scared,” Stone added. Stone said that he and Gibson decided to come forward in August after watching Hoover pound his chest and howl like a monkey while being told about a complaint by a black suspect. “We were just completely at a loss for words,” Stone said.