Wondering What 'Privilege' Is? This Video Has Some Answers For You 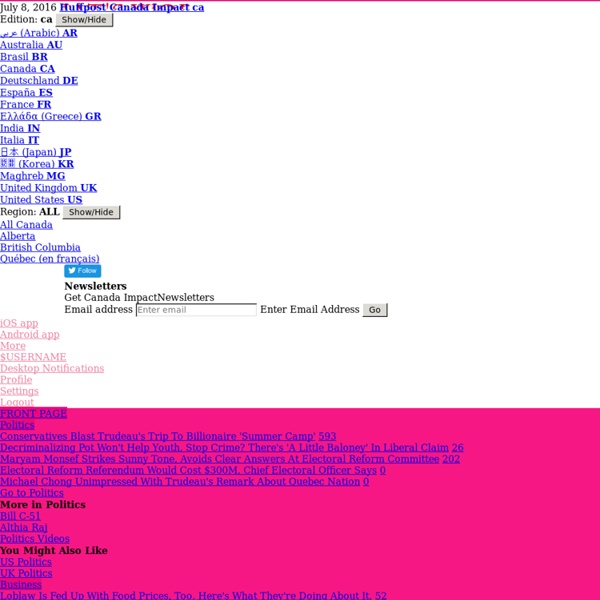 35 Bill Cosby Accusers Tell Their Stories More has changed in the past few years for women who allege rape than in all the decades since the women’s movement began. Consider the evidence of October 2014, when a Philadelphia magazine reporter at a Hannibal Buress show uploaded a clip of the comedian talking about Bill Cosby: “He gets on TV, ‘Pull your pants up, black people … I can talk down to you because I had a successful sitcom.’ Yeah, but you rape women, Bill Cosby, so turn the crazy down a couple notches … I guess I want to just at least make it weird for you to watch Cosby Show reruns.

An open letter to everyone who thinks having a black family member exempts them from racism - It was a Thursday night after 8, and just like every Thursday night after 8, we sat in the presence of poetry. That week, there was soap, hand-crafted by one of our members and passed from hand to hand to hand, grazed by fingertips, absorbed. This was our writing prompt. The bar of soap fell into my palm. On it read the words “They washed their hands of us.” Man Suing Wife for Fraud Over Her Makeup Should Be Countersued for Fraudulently Claiming to Love Her In “I can’t believe this is really happening; get me off this planet” news, a man is suing his wife for fraud after seeing her without makeup for the first time. I guess he would know a thing or two about fraud, what with clearly not really meaning any of those vows or anything. The Algerian man told the court that when he woke up next to his wife the morning after their wedding, he could hardly recognize her. Emirates 24/7 reports that the man claimed he first thought she was a “thief who came to steal his apartment” and demanded $20,000 in damages for his psychological shock at seeing that his wife is actually a human being with a real face like everyone else. If this were just an isolated incident, it’d be much easier to laugh off, but we’re all too familiar around here with the duality of expectations that society places on women. This was illustrated painfully well in a recent video showing how social media users responded to pictures of the same woman with and without makeup:

sans titre An Algerian man has reportedly sued his wife after waking up on the day after their marriage to find her barefaced with no makeup. Emirates 247 reported that the groom took his bride to court the day after their marriage, where he accused her of not looking as pretty as she did before the wedding. The groom, who was not identified, was seeking $20,000 in damages for "psychological suffering," according to the report. Algerian reports claimed when he first laid eyes on his au naturel wife, he didn't recognize her and even mistook her for a “thief who came to steal his apartment." “He said he was deceived by her as she used to fill up her face with make up before their marriage,” Emirates 247 reported said, quoting a court source.

5 Ways People Police Women Who Dress “Immodestly” Originally published on Feminspire and cross-posted here with their permission. This morning, as I ventured onto Facebook to see if anything interesting had happened during the night hours, I noticed a picture that a relative had posted. It had a little piggy on it, and generally I like little piggies, so I clicked on it. Then I saw what the picture says (it was one of those e-cards that no one actually emails to each other anymore).

Female Novelist Learns How Far a Male Pen Name Can Take Her There is a gender bias in the publishing industry. Women’s writing often gets talked about differently, reviewed differently (if at all), and the content judged differently than writing by men. Of course, publishing is only one industry in which unconscious bias about names based on gender or race exists, and there have been studies done to explore this in other industries. In the case of publishing, a female novelist by the name of Catherine Nichols decided to try an experiment. Eating Disorder Recovery Advocacy Is Usually Fatphobic – Here Are 4 Ways to Start Fixing That Recently, I had what felt like an awesome idea. I had gone to bed at night, feeling really overwhelmed about how full I felt, about how bloated I was. And that, very quickly, translated in my eating disordered mind into “I ate too much.” Whatever that means. So as I lay there in my discomfort, trying to quiet the thoughts enough to fall asleep, I remembered something that soothed me: A few times, I’ve seen Tumblr posts that address this issue exactly – in the form of three-paneled pictures of women from side view angles showing how different their stomachs look upon waking, after lunch, and then after dinner.