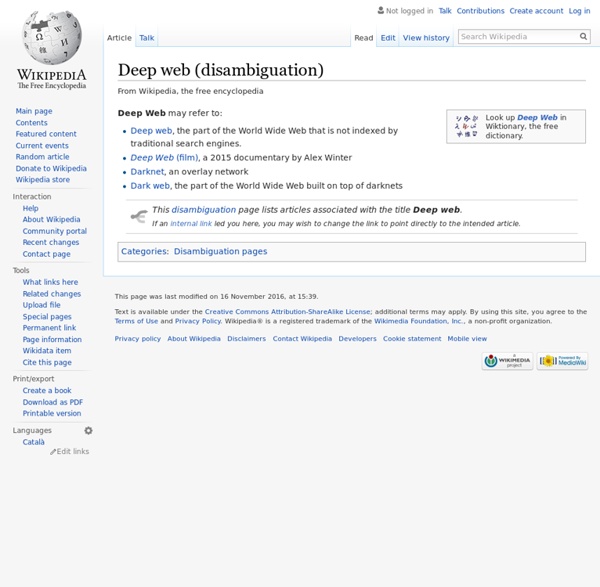 Related:  Deep_Web • A bit about the Deep-Web • Useful.....eventually. • Other stuff • Server Costs

Database search engine There are several categories of search engine software: Web search or full-text search (example: Lucene), database or structured data search (example: Dieselpoint), and mixed or enterprise search (example: Google Search Appliance). The largest web search engines such as Google and Yahoo! utilize tens or hundreds of thousands of computers to process billions of web pages and return results for thousands of searches per second. High volume of queries and text processing requires the software to run in highly distributed environment with high degree of redundancy. Modern search engines have the following main components: National Capital FreeNet, Ottawa's not-for-profit internet provider (ISP) DSL ('Digital Subscriber Line') technology gives you high-speed internet access via fiber optics and copper. (This web page is new. If it gives you problems, please tell us; we'd appreciate email to office@ncf.ca or a call to 613-721-1773. Thank you!)

Darknet (file sharing) Darknets are distinct from other distributed peer-to-peer networks as sharing is anonymous (that is, IP addresses are not publicly shared), and therefore users can communicate with little fear of governmental or corporate interference.[2] For this reason, darknets are often associated with dissident political communications and illegal activities. More generally, the term "darknet" can be used to describe all non-commercial sites on the Internet,[3] or to refer to all "underground" web communications and technologies, most commonly those associated with illegal activity or dissent.[2] The Microsoft researchers argued that the presence of the darknet was the primary hindrance to the development of workable DRM technologies. The term has since been widely adopted and has seen usage in major media sources, including Rolling Stone and Wired.

TOP 10 IMPOSSIBLE INVENTIONS THAT WORK « Revolutionizing Awareness Searl Effects Generator by Jeane Manning When Leonardo da Vinci sketched out an impossible invention, fifteenth-century scholars probably put him down. Forget it, Leon. If machines could fly, we’d know about it. Throughout history, experts tell innovators that their inventions are impossible. Peer-to-peer A peer-to-peer (P2P) network in which interconnected nodes ("peers") share resources amongst each other without the use of a centralized administrative system In a peer-to-peer network, tasks (such as searching for files or streaming audio/video) are shared amongst multiple interconnected peers who each make a portion of their resources (such as processing power, disk storage or network bandwidth) directly available to other network participants, without the need for centralized coordination by servers.[1] Historical development[edit] While P2P systems had previously been used in many application domains,[2] the concept was popularized by file sharing systems such as the music-sharing application Napster (originally released in 1999). Tim Berners-Lee's vision for the World Wide Web was close to a P2P network in that it assumed each user of the web would be an active editor and contributor, creating and linking content to form an interlinked "web" of links. Current applications[edit]

The spooky world of the 'numbers stations' 16 April 2014Last updated at 09:27 ET By Olivia Sorrel-Dejerine BBC News Magazine This is the era of hyper-tech espionage, encrypted emails and mindboggling cryptography. But you can hear a very old-fashioned form of espionage on shortwave radio. It is 13:03 on a Tuesday in a cramped room with some fairly advanced radio equipment. Cybercrime in the DeepWeb Earlier, we published a blog post talking about the recent shut down of the Silk Road marketplace. There, we promised to release a new white paper looking at cybercrime activity on the Deep Web in more detail. This paper can now be found on our site here.

YOU CAN BUILD YOUR OWN ADD~ON GREENHOUSE It's a snap to design and build your own add-on greenhouse from low-cost new and salvaged materials. You Can Build Your Own Add-On Greenhouse For decades, the height of gardening and "food self-sufficiency" luxury has been the private greenhouse. Unfortunately — or, perhaps, foolishly — too many of us have traditionally regarded a family greenly greenhouse as just that . . . a luxury that "maybe" we'll be able to afford "someday". Internationally recognized greenhouse gardening authority Jack Kramer doesn't agree with that line of thought at all. Database download Wikipedia offers free copies of all available content to interested users. These databases can be used for mirroring, personal use, informal backups, offline use or database queries (such as for Wikipedia:Maintenance). All text content is multi-licensed under the Creative Commons Attribution-ShareAlike 3.0 License (CC-BY-SA) and the GNU Free Documentation License (GFDL).

Centralia, Pennsylvania Centralia is part of the Bloomsburg-Berwick micropolitan area. The borough is completely surrounded by Conyngham Township. All properties in the borough were claimed under eminent domain by the Commonwealth of Pennsylvania in 1992 (and all buildings therein were condemned), and Centralia's ZIP code was revoked by the Postal Service in 2002.[3] State and local officials reached an agreement with the seven remaining residents on October 29, 2013 allowing them to live out their lives there, after which the rights of their properties will be taken through eminent domain.[4] History[edit] Early history[edit] Many of the Native American tribes local to what is now Columbia County, Pennsylvania sold the land that makes up Centralia to colonial agents in the year 1749 for the sum of five hundred pounds (over half a million pounds or $800,000 in today's money).

Deep Web Search Engines Where to start a deep web search is easy. You hit Google.com and when you brick wall it, you go to scholar.google.com which is the academic database of Google. After you brick wall there, your true deep web search begins. You need to know something about your topic in order to choose the next tool. To be fair, some of these sites have improved their index-ability with Google and are now technically no longer Deep Web, rather kind-of-deep-web. However, there are only a few that have done so. SmartThings: Make Your World Smarter by SmartThings Extra SmartThings for all! See Update 16 for details. SmartThings makes it easy to connect the things in your physical world to the Internet. You can monitor, control, automate, and have fun with them from anywhere - at home, office, or on the go. We've made it possible to install apps that interact with your SmartThings, as well as online and other services. This unlocks a world of possibilities and and unlimited potential to make your life easier, more convenient and fun.

Berkeley Open Infrastructure for Network Computing BOINC has been developed by a team based at the Space Sciences Laboratory (SSL) at the University of California, Berkeley led by David Anderson, who also leads SETI@home. As a high performance distributed computing platform, BOINC has about 596,224 active computers (hosts) worldwide processing on average 9.2 petaFLOPS as of March 2013.[2] BOINC is funded by the National Science Foundation (NSF) through awards SCI/0221529,[3] SCI/0438443[4] and SCI/0721124.[5] History[edit] BOINC was originally developed to manage the SETI@home project. The Rochester Mirage - Rochester Wiki High atop Mt. Hope Cemetery once stood a towering structure known as The Fandango, rising above the treeline to offer visitors a breathtaking view of our city and the Genesee winding its way out to Lake Ontario. On a bright clear day, April 16th of 1871, early visitors to the tower marvelled at the unusual vision it afforded them: the landscape North of Main Street appeared as though it had radically changed overnight. As word spread throughout the day, it became clear to the thousands who gathered there to witness the spectacle that they were indeed not seeing Rochester at all, but instead found themselves able to make out the opposite shore of Lake Ontario in vivid detail. Lakes, forests, and Canadian landmarks were all somehow made easily identifiable to the naked eye despite their actual distance of over 50 miles away.