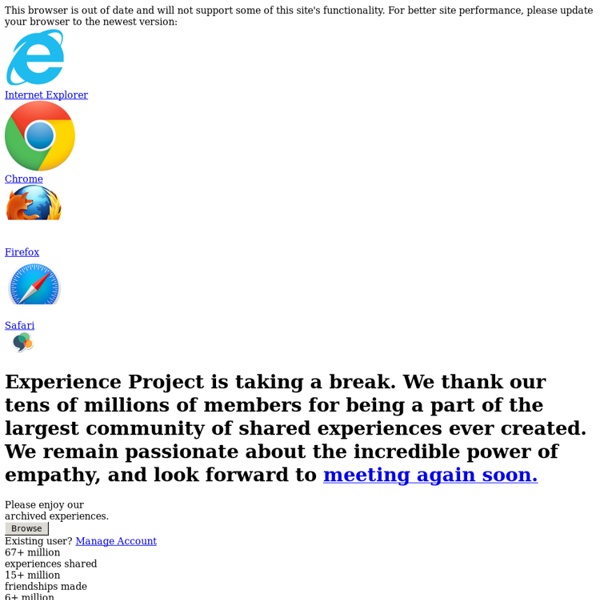 What Does Your Body Language Say About You? How To Read Signs and... - StumbleUpon Art by LaetitziaAs we all know, communication is essential in society. Advancements in technology have transformed the way that we correspond with others in the modern world. Because of the constant buzz in our technological world, it's easy to forget how important communicating face-to-face is.

how to easily delete your online accounts Spring Financial is a finance company based in Canada. The company was founded in 2014. Spring Financial is a subsidiary of Canada Drives, which is a leading auto financing company in Canada. Swingers Date Club - Rencontrez rapide d’échangistes locaux sur SDC.com Statement of Purpose SDC is a private club providing a service for adults who wish to communicate online with other adults, to develop a network of friends and acquaintances for social reasons only. Disclaimer: This website contains adult material. You must be over 18 to enter or 21 where applicable by law. All Members and models on this website are over 18 years of age.

11 cheap gifts guaranteed to impress science geeks Science comes up with a lot of awesome stuff, and you don't need a Ph.D, a secret lab, or government funding to get your hands on some of the coolest discoveries. We've got a list of 11 mostly affordable gifts that are guaranteed to blow your mind, whether or not you're a science geek. Click on any image to see it enlarged. 1. Aerogel Also known as frozen smoke, Aerogel is the world's lowest density solid, clocking in at 96% air. untitled It's 7:30 p.m. You're tearing into a work file on your laptop, a beer on the table next to you and a ball game muted on the TV across the room. Enter your best girl; trailing closely behind her, inevitably, is The Question.

Internet Society The Internet Society (ISOC) is an international, non-profit organization founded in 1992 to provide leadership in Internet related standards, education, and policy. It states that its mission is "to promote the open development, evolution and use of the Internet for the benefit of all people throughout the world".[1] The Internet Society has its headquarters in Reston, Virginia, United States,[2] (near Washington, D.C.), and offices in Geneva, Switzerland. It has a membership base of more than 130 organizations and more than 55,000 individual members. Members also form "chapters" based on either common geographical location or special interests. Romantic Day And Evening Ideas We live in a day and age where lives are busy and schedules are swamped. The working day is also a little more versatile than it has been in days past, and people are working longer hours or irregular shifts. This can put a damper on your love life, but this should not discourage you from enjoying you and your partner no matter what time of day it is.

Infographic: The 550,000 Miles Of Undersea Cabling That Powers The Internet They seem so brittle. Cables that are a little more than two inches thick line our ocean floors, culminating in over half a million miles in length, transmitting terabytes of data across the globe every second. What about satellites? As of 2006, they represented just 1% of telecommunications traffic. Most of our information flows through these underwater pipes, laid by ships off gigantic spools. Whiplr is Tinder for the fetish-driven Mainstream dating services like Tinder, Grindr or OK Cupid don't make it too easy to admit if your tastes are "very singular." That's why Whiplr has been created as a hookup app for people who prefer to get off with more than just a special cuddle. Simply offer up a picture of your face, a nickname and a list of extra-curricular interests and you'll instantly be pointed to members in the local vicinity, arranged by distance.

50 Questions to Get to Know Someone by Andrew Tarvin on June 2, 2010 Want to get to know me better (or anyone really)? Just ask one of the below “get to know you” questions… they’re meant to be fun, interesting questions that can help you learn more about the person you are talking to.

Haven't heard of this site before. I read enough to want to sign up & realised it's closed down :( by ca955 Apr 23

The Experience Project is an online community premised on connecting members who share similar life experiences. by adriaanrijkens Apr 14