A United Kingdom: the true story of Botswana's first president and the English woman he loved. Population Clock. 2016 Political Quiz. 100 Civics Questions and Answers with MP3 Audio (English version) The 100 civics (history and government) questions and answers for the naturalization test are listed below. 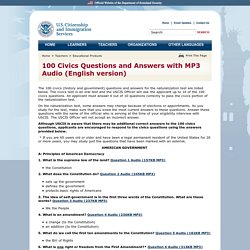 The civics test is an oral test and the USCIS Officer will ask the applicant up to 10 of the 100 civics questions. An applicant must answer 6 out of 10 questions correctly to pass the civics portion of the naturalization test. On the naturalization test, some answers may change because of elections or appointments. As you study for the test, make sure that you know the most current answers to these questions. Guess What Women Couldn't Do in 1960? - offbeat. Girl Rising. President Obama sheds tears during gun speech. President Obama sheds tears during gun speech. Transcript: Read the Full Text of Obama’s Statement on the Shooting in Oregon.

President Obama spoke from the podium of the James Brady Press Briefing room on Thursday evening in the wake of the mass shooting at Umpqua Community College. 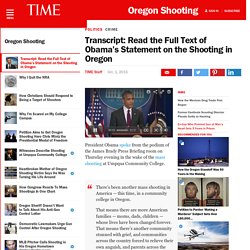 There’s been another mass shooting in America — this time, in a community college in Oregon.That means there are more American families — moms, dads, children — whose lives have been changed forever. That means there’s another community stunned with grief, and communities across the country forced to relieve their own anguish, and parents across the country who are scared because they know it might have been their families or their children.I’ve been to Roseburg, Oregon. There are really good people there. I want to thank all the first responders whose bravery likely saved some lives today.

Barackobama. Le rap de Michelle Obama pour encourager à aller à l'université. Synthèse_dossier1.docx - Microsoft Word Online. Artist Richard Prince under fire after using people's Instagram photos in exhibition. Painter and photographer Richard Prince, 65, blew up screenshots of Instagram photos for his series titled New Portraits The 38 pictures, which were first displayed at the Los Angeles-based Gagosian Gallery in 2014, sold out at the Frieze New York art fair last weekEach piece reportedly sold for more than $90,000 By Erica Tempesta For Dailymail.com Published: 20:56 GMT, 26 May 2015 | Updated: 22:24 GMT, 29 May 2015 The art community is outraged after a controversial artist ‘stole’ other people's Instagram images and sold them at an exhibition - without their permission - for upwards of $100,000 each. 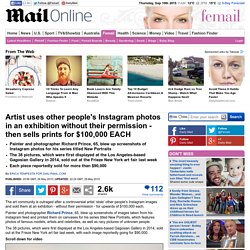 Painter and photographer Richard Prince, 65, blew up screenshots of images taken from his Instagram feed and printed them on canvases for his series titled New Portraits, which features photos of famous models, artists and celebrities, as well as racy pictures of unknown people. Scroll down for video Each piece features an added comment from @richardprince1234, Mr Prince's Instagram handle. Thedustladydies. What makes an image unforgettable? Joe Rosenthal's 1945 photograph of U.S. troops raising a flag in Iwo Jima during World War II remains one of the most widely reproduced images. 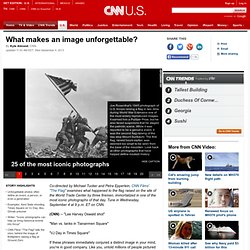 It earned him a Pulitzer Prize, but he also faced suspicions that he staged the patriotic scene. While it was reported to be a genuine event, it was the second flag-raising of the day atop Mount Suribachi. The first flag, raised hours earlier, was deemed too small to be seen from the base of the mountain. Look back at other photographs that have helped define modern history. A hooded detainee in U.S. custody during the Iraq War stands on a box with electrical wires hooked up to his fingers. During the Vietnam War, Eddie Adams photographed Gen. Richard Drew captured this image of a man falling from the World Trade Center in New York after the terror attacks on September 11, 2001. 9/11 'Dust Lady' dies after cancer battle. The dust-covered 9/11 survivor whose photograph became one of the defining images of the terror attacks has died after a battle with stomach cancer at the age of 42. 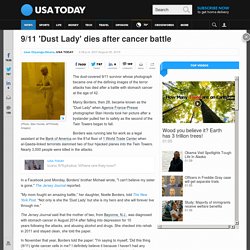 Marcy Borders, then 28, became known as the "Dust Lady" when Agence France-Presse photographer Stan Honda took her picture after a bystander pulled her to safety as the second of the Twin Towers began to fall. Borders was running late for work as a legal assistant at the Bank of America on the 81st floor of 1 World Trade Center when al-Qaeda-linked terrorists slammed two of four hijacked planes into the Twin Towers. Nearly 3,000 people were killed in the attacks. In a Facebook post Monday, Borders' brother Michael wrote, "I can't believe my sister is gone," The Jersey Journal reported. "My mom fought an amazing battle,” her daughter, Noelle Borders, told The New York Post.

In November that year, Borders told the paper: "I'm saying to myself, 'Did this thing (9/11) ignite cancer cells in me? ChallengeU.