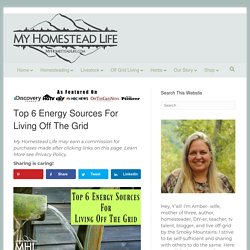 Learn More see Privacy Policy. Sharing is caring! When deciding to live Off The Grid, one of the main concerns (other than a water source) is generating energy to supply your electrical needs. The first thing we all think of when thinking of green energy is solar.

Subterranean heating. Zimbabwe Man Invents An Electric System That Charges Itself. The Facts:Mainstream UFO disclosure is taking off and the subject is no longer taboo. 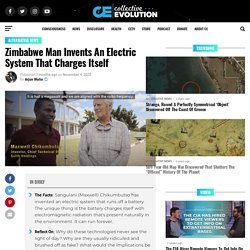 There's a common narrative in the field suggesting that because mainstream media is presenting the topic the way they now are, the phenomenon represents nothing but lies.Reflect On:Does mainstream media cover real events and attempt to manipulate the perception of the masses regarding such events? Are there powerful groups of people out there who want to control the narrative when it comes to the topic of UFOs? Collective Evolution has been covering the UFO/extraterrestrial (see UFO article archive here) phenomenon since our inception in 2009, and one common theme we’ve come across many times in the “truther” community, for lack of a better word, is the idea that some very powerful people are planning to stage a “false flag” alien invasion and that this subject is full of deception. 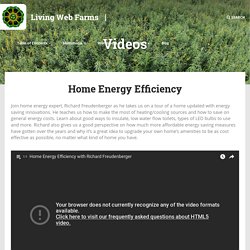 If you disagree, you will be re-directed to the home page, and will not be able to attend on-farm events. For the opportunity to participate in this workshop, conducted through Living Web Farms (“LWF”), I hereby grant to LWF and its successors, licensees, assigns, employees and/or agents (a) the right to photograph, record, tape, film and otherwise reproduce my likeness, voice, mannerisms, image, appearance and performance during my participation in the Workshop, and (b) the right to use my name, likeness, portrait or pictures, voice and biographical material about me. 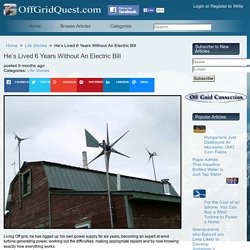 If you want to cut your electric bill, or if you would like to get off grid, here is how to do it: follow someone who’s already doing it. Predicting 2017: How Future Energy Will Change Our Lives. The transition from one year to the next is always a little uncertain – an uneasy blend of anxiety and optimism, it’s also a time of retrospection, introspection, and even a little tentative prognostication. 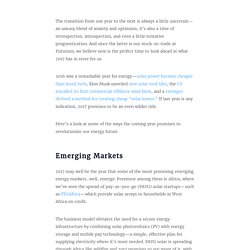 And since the latter is our stock-in-trade at Futurism, we believe now is the perfect time to look ahead at what 2017 has in store for us. 2016 was a remarkable year for energy—solar power became cheaper than fossil fuels, Elon Musk unveiled new solar roof tiles, the US installed its first commercial offshore wind farm, and a teenager devised a method for creating cheap “solar leaves.” If last year is any indication, 2017 promises to be an even wilder ride. Here’s a look at some of the ways the coming year promises to revolutionize our energy future. Emerging Markets. Our Revolution - Journal. Scottish Island to be First 100% Self-Sustaining Place on Earth. A beautiful Island North-West of Scottland called Eigg is leading the way in the sustainable revolution by being the first of its kind to become completely sustainable using natural renewable energy sources like wind and water as they naturally flow in the environment. 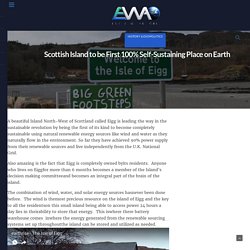 So far they have achieved 90% power supply from their renewable sources and live independently from the U.K. National Grid. 13 Year-Old Invents Free Energy Device for Under $15 (Video) Inspired by the works of Nikola Tesla, a 13-year-old kid named Max Loughan has again proven that useable electricity can be harvested from the atmosphere all around us. 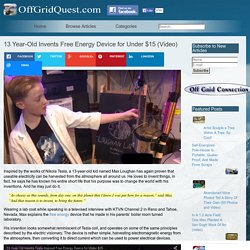 He loves to invent things, in fact, he says he has known his entire short life that his purpose was to change the world with his inventions. And he may just do it. “As cheesy as this sounds, from day one, on this planet that I knew I was put here for a reason,” said Max. “And that reason is to invent, to bring the future.” Open Source Plans for Modern Tesla Free Energy Generator Released to Public. This Interview With Nikola Tesla From 1899 Reveals His Extraordinary Personality. Very interesting interview Nikola Tesla and John Smith in which he said: Everything is the Light. 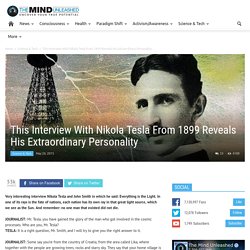 Open Source Plans for Modern Tesla Free Energy Generator Released to Public – Science Mastermind. “This new power for the driving of the world’s machinery will be derived from the energy which operates the universe, the cosmic energy, whose central source for the earth is the sun and which is everywhere present in unlimited quantities.” 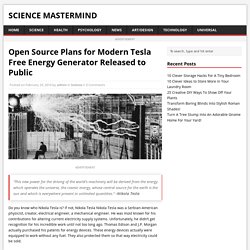 –Nikola Tesla Do you know who Nikola Tesla is? If not, Nikola Tesla Nikola Tesla was a Serbian-American physicist, creator, electrical engineer, a mechanical engineer. He was most known for his contributions for altering current electricity supply systems. - The Future of Energy Film. Algae Streetlight. Microalgae Street Lamps (in prototype stage). 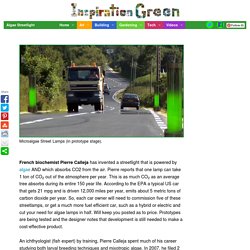 French biochemist Pierre Calleja has invented a streetlight that is powered by algae AND which absorbs CO2 from the air. Pierre reports that one lamp can take 1 ton of CO2 out of the atmosphere per year. This is as much CO2 as an average tree absorbs during its entire 150 year life. According to the EPA a typical US car that gets 21 mpg and is driven 12,000 miles per year, emits about 5 metric tons of carbon dioxide per year. Energy Producing Land Art. Energy Producing Land Art. The Land Art Generator Initiative (LAGI) brings together artists, architects, scientists, landscape architects, engineers, and others in a first of its kind collaboration.

The goal of the Land Art Generator Initiative is to design and potentially construct public art installations that uniquely combine aesthetics with utility-scale clean energy generation. The works will serve to inspire and educate while they provide renewable power to local residents. Home. Tesla's new $3500 10kWh Powerwall home battery lets you ditch the grid.

Tesla’s long awaited home battery is now on the market. Late in the evening on April 30, Tesla CEO Elon Musk kept his promise for his hotly anticipated announcement about the company’s next product line. Musk admitted the week prior that the announcement would indeed be about the home battery he promised earlier in the year, the details of which have been quite secretive until, well, the announcement. Musk took the stage at 8pm PST on a Thursday evening to make the announcement, in which he wowed the crowd by directing people to the Tesla website, where the stationary battery is already available for pre-order and scheduled to ship within a few months.

Endless Hot Water WITHOUT Electricity. Low Cost - No Cost Energy: The Wave Of The Future. By and large, people are waking up to renewable energy is and its advantages. We live in a world where everything is taxed in one way shape or form or another, and the internet came along and lessend local taxes around the world in a big way. E-commerce has transformed the world into a more interconnected global marketplace where many purchasers pay shipping yet no sales tax. In a complexly taxed society, governers struggle to keep revenue streams current, and fairness among different industries is harder and harder to achieve. Batteries made from salt and water last 10 times longer. Jane Mountain The 2015 $500,000 Lemelson-MIT Prize has gone to Jay Whitacre for his invention of the Aqueous Hybrid Ion (AHI) battery. The battery, used primarily in combination with solar and wind energy systems, was created using abundant and non-toxic resources including salt water and carbon. Whitacre, a professor at Carnegie Mellon University’s College of Engineering, is also the founder of Aquion Energy, which manufacture and sell the battery in several countries worldwide.

Mid Tech Energy Changing The World With This Announcement. Endless Hot Water Without Electricity. This Modern Park Tree Charges Up Your Phone And Pulls Water From The Air! One Man's DIY Creativity In This Wooden Alternator For Wind-Power Generation. 25 Ways To Keep Warm Without Turning Up The Heat.