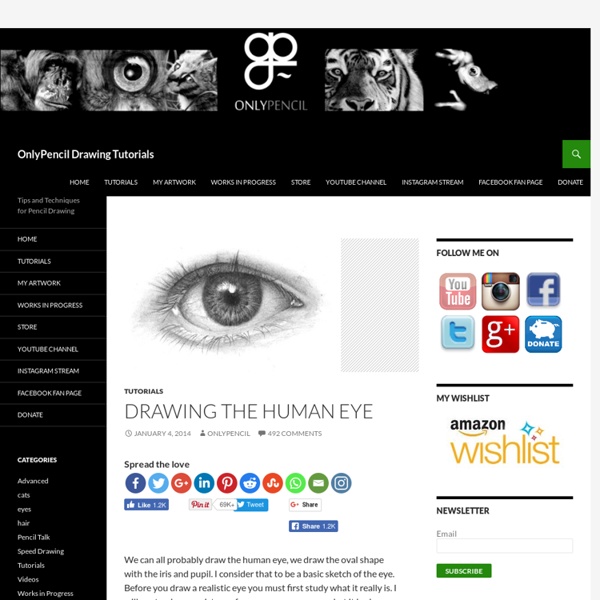 We can all probably draw the human eye, we draw the oval shape with the iris and pupil. I consider that to be a basic sketch of the eye. Before you draw a realistic eye you must first study what it really is. I will post a closeup picture of an eye so you can see what it looks up close. Take a look at the pupil(the black area in the center), this area contracts in size when light hits it. Tools Used: 2h wood cased pencil2b 0.5 Mechanical PencilKneaded EraserColor BlenderSmooth Bristol Paper This is the final drawing of what we’ll be working on. Step 1 Well we will start by drawing the outline, this can be a fast sketch, but enough detail to show the shape. Step 2 Start by filling in the pupil using the 6b progresso pencil. Step 3 Take your 4b progresso pencil and put down some graphite on a separate piece of paper. Step 4 Using your mechanical pencil draw the lines that you see around the area that was shaded previously, try to make them quick and light. Step 5 Step 6 Step 7 Step 8 Step 9 Step 10

Realistic Eyes Have trouble drawing eyes? Well, you’re probably not alone. Eyes are the first thing that the viewer is drawn to in a portrait. What you’ll need:HB (#2) Pencil, 4B pencilEraserDrawing paperDrawing surface The first step in drawing eyes is to draw the full eyeball itself. After you have your “not-a-perfect-circle” eyeball drawn, draw an oval shape horizontally across the eyeball in the shape of an eyelid opening. Once you have the opening for the eye nailed down, you can erase the lines outside. Now we’re ready for highlights! Almost done now! We’re entering the home stretch!

Hand-Drawn Banner Tutorial I’d like to state as a matter of fact that hand-drawn banners are the chic design element right now, and their applications are limitless. One stroll around Whole Foods will tell you they look great on chalkboards. Many hip blogs {though … come to think of it, not mine} feature them to draw your attention to this, that, or the other. The Arch Banner: To create an arch banner, start with a curved line. Extend a line down from the right side, about 0.5″ long. From the bottom of that line, draw a curved bottom line that’s parallel to your top line. “Seal it”! Now, draw a short horizontal line that starts about 1/4th of the way down on the side of your banner. Draw a line straight down from the end of that line. Finish up this shape by drawing another horizontal line over, and a vertical line up. For the ribbon tail, draw a small, curved line that starts about 1/4th of the way down on the horizontal line that is furthest left. Make a small vertical line down. And add the first half of a V-cut.

I Will Knot! Pencil Portrait Lessons In the last lesson on eyes we talked about the various problems that artists run into when trying to draw eyes as realistic as possible. In this lesson, we will begin the drawing process. There are two things that you need to do in order to in order to get started. The first is to make sure you are using the right tools. If you have trouble finding the tools locally, or if you would simply like to help support this site, you can purchase the tools directly from my Shopping Center by clicking on the Pencil Portrait Supplies link in the upper left section of this page. The next thing that you have to have is your initial sketch drawn on your paper. Step One - The Pupil The first step is to draw in the pupil. Important Note: Make sure that you do NOT color in the areas that will be the highlights. Step Two - The IrisBefore we start drawing in the iris, I want to talk a moment about a technique called hatching. This image illustrates both the correct and incorrect usage of hatching.

How to Draw the Head From Any Angle The Basic Forms To draw the head from any angle you must first understand its basic structure. Look past all the distracting details and visualize the underlying forms. This ability to simplify can be applied to the features of the face, but when starting the drawing you could look even further. Ignore even the features and simplify to the most basic form of the head. The head deconstructed into its basic forms, is a sphere as the cranium and a block as the jaw and cheek bones. A Sphere as the Cranium The sides of the head are flat, so we can slice off a piece from both sides of the ball. A Block as the Jaw and Cheek Bones Attach the shape of the jaw. Constructing From Any Angle Step 1 – Determine the angle of the ball The angle of the head is established at the very beginning of the drawing with the ball. X Axis - The up and down tilt is established by the angles of the horizontal and vertical lines in the oval. Step 2 – Find the thirds Step 3 – Add the jaw Step 4 – Add the features

How To Draw "How to Draw" is a collection of tutorials that will teach you everything from perspective basics to shading chrome. Never picked up a pencil before? Fear not! From simple line drawings to modern art and easy animations, we've got you covered. All projects come from Instructables.com and contain pictures for each step so you can start your masterpiece today! Instructables is the most popular project-sharing community on the Internet. Seven Civil War stories your teacher never told you How to Draw the Nose Update 09-26-2012 – Above is a video version of this tutorial. For more video tutorials visit Proko.com and subscribe to the newsletter In this tutorial I will go over the structure of the nose and give detailed information about the bridge, ball, and nostrils of the nose. At the end, I will show a step by step of a nose drawing. The Major Planes When drawing the nose, I’ll usually start by indicating the 4 major planes – top, 2 sides, and bottom. Anatomical Information I think the anatomical shapes in the nose are really interesting. The Minor Planes It’s important to memorize the subtle plane changes in all the different part of the nose. Minor Planes of the Bridge The Glabella is shaped like a keystone. Minor Planes of the Ball The ball of the nose isn’t perfectly round, but has very distinct plane changes. Minor planes of the Nostrils The nostrils, also called wings, curl under themselves similar to the septum. Drawing the Nose 4. Made a video version of this tutorial.

How to Draw Ears For a video version of this tutorial visit www.proko.com/how-to-draw-ears-anatomy-and-structure In this tutorial I will go over the parts of the ear and suggest an easy way to remember all these complex shapes. At the end, I will show a step by step of an ear drawing. Basic Forms The simplified volume of the ear is very much like a megaphone. Just Remember “why?” At first glance the shapes in the ear seem random and confusing. Placement of the Ears The ears lie in the middle third of the face. In Perspective During an up-tilt or down-tilt the placement of the ears is very important since doing it incorrectly can break the illusion of a tilt. Anatomical Information Shading the Complex Forms of the Ear Concha The concha is the bowl-shaped part that attaches the back of the ear to the head. Helix The Helix is a semi-cylindrical form and should be shaded as such. Antihelix The antihelix is the Y shape inside the ear. Tragus and Antitragus Lobule Drawing the Ear 5. Made a video version of this tutorial.